Catriona Matthew's European side completed a successful title defence of the Solheim Cup with a 15-13 victory at the Inverness Club, with the visitors winning five and halving two of the 12 singles matches on the final day.

How did Europe make it back-to-back Solheim Cup victories and claim a 15-13 win on American soil? We look back at every singles match from a dramatic final day in Ohio...

The opening match may not have matched their 2017 contest in terms of quality, but it certainly shared similarities in offering back-and-forth entertainment. Both bogeyed the first and Thompson shanked out of the rough on her way to losing the second, before Thompson won the sixth with a par but fell behind when Nordqvist birdied the par-four next. 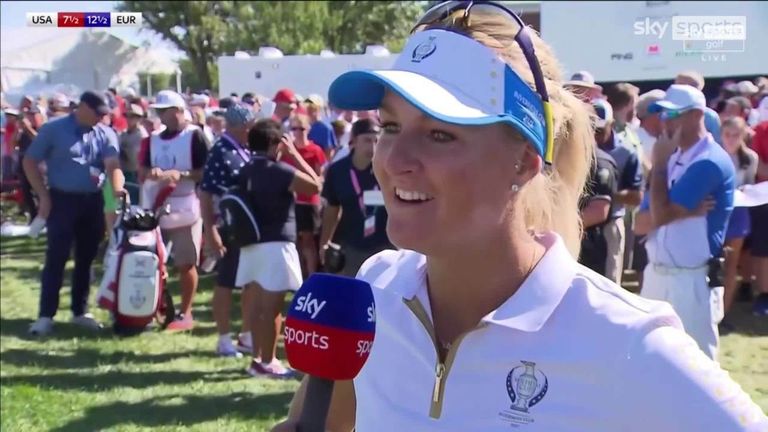 Thompson made back-to-back birdies from the eighth and remained ahead until Nordqvist struck her tee shot at the par-three 12th to inside four feet, with the Swede squandering a five-foot birdie chance at the 14th but holing from a couple of feet closer at the next to move ahead. Thompson levelled again at the 16th to take the contest to the last, where both made par to share the spoils.

Sagstrom bogeyed the first but pulled back with a birdie at the par-five next, with the Swede cancelling out a bogey and lost hole at the fourth by picking up a shot from close range at the eight to reach the turn all-square.

How Europe retained the Solheim Cup

Report and highlights from a dramatic 15-13 victory for Team Europe in Toledo, Ohio.

The Swede won the 10th and doubled her lead with a 15-foot at the 12th but lost the 13th to an Ewing birdie, only for the American to post back-to-back bogeys from the 15th to hand Sagstrom her first point of the week.

Maguire rolled in a 12-foot eagle at the second and retained her lead throughout against her fellow rookie, posting three birdies in a four-hole stretch from the fourth to find herself four up after seven. 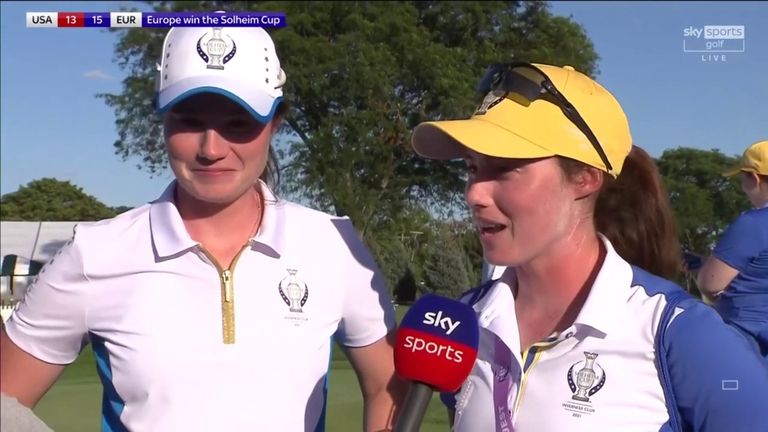 A run of pars from both players kept Maguire in total control, with a par at the last enough to win the match with four holes to spare and cap off an unbeaten debut for the Solheim Cup rookie.

Hall won the first with a par and doubled her advantage with a 25-foot birdie at the fourth, only for Korda to fight back with a birdie-two at the next, a winning bogey at the sixth and a tap-in birdie after a stunning approach into the eighth to move one ahead. 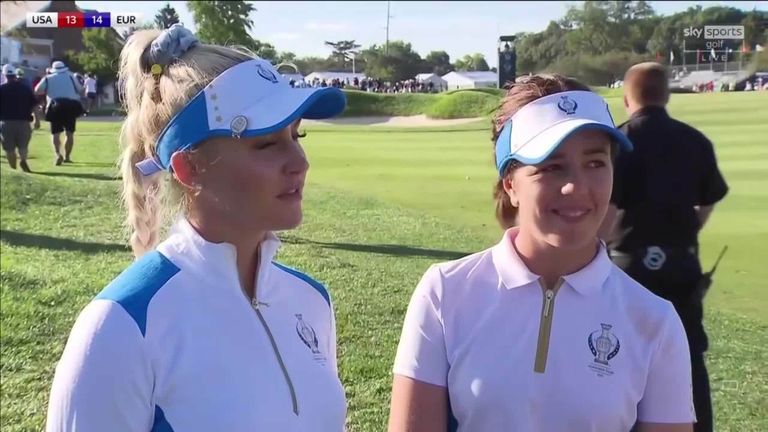 Korda also won the ninth and responded to a Hall birdie at the next by firing her approach at the 11th inside five feet. Hall birdied the 13th and cancelled out a lost hole at the next by winning the 15th with a par to get within one, before her fate was sealed when she went from bunker to bunker on the final hole.

The Frenchwoman never trailed against the Solheim Cup rookie, birdieing the par-three fifth and winning successive holes from the eighth to take a three-hole lead into the back nine.

Boutier birdied the 11th hole and won the 13th with a par, before securing her win at the par-four next to claim her first full point of the week and move Europe into a 12-7 advantage.

The Dane claimed the first and matched Ernst's eagle at the par-five second after seeing her incredible approach cannon off the American's ball, before cancelling out losing the third with a bogey by moving back ahead with a par at the seventh.

Ernst birdied the 11th and 13th to grab the lead for the first time but then posted a three-putt bogey at the par-four 15th, with the American having to settle for a half-point after missing a birdie opportunity on the final hole.

The European rookie was never behind against Salas, despite the American cancelling out an opening-hole bogey with a winning eagle at the next, with Castren birdieing the fifth and replying to a bogey at the sixth with a birdie at the eight to take a one-hole lead into the back nine.

Salas replied to Castren's birdie at the 11th by winning the next two holes, only for the Finn to nail a huge putt at the 15th and roll in from 15 feet to match her playing partner's birdie at the next before making par at the last to secure the point required to retain the trophy. 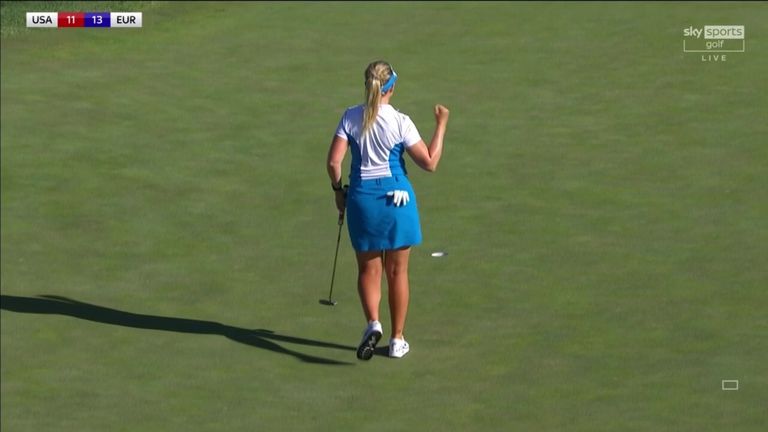 The Spaniard was two ahead with six holes to play until Altomare nailed a lengthy birdie at the 13th and holed another from an even longer distance at the next to pull the contest back level.

A two-putt at the 16th gave Altomare the lead before a winning birdie at the par-four next completed the impressive comeback and ensure she would leave the tournament with a point to her name.

The American raced ahead with back-to-back birdies before winning the fourth with a par, while three straight bogeys from the sixth left Popov six behind after just eight holes.

Popov birdied the ninth but lost the 11th, with the German holing a 15-foot birdie at the 13th and winning the next two holes to extend the contest before eventually being beaten at the 16th.

Mel Reid lost to Yealimi Noh by one hole

The Englishwoman bogeyed three of her opening four holes and saw Noh birdie the other to find herself quickly four down, although a par and bogey were enough to win the next two holes.

Reid was three down with four to play but one the 15th and 17th to keep the contest alive to the last, where she missed a par putt which would have claimed an unlikely half.

Hull holed a 15-footer at the third and won the fourth when Korda fluffed a chip from the rough, with the American still trailing with eight holes to play until an impressive turnaround over the back nine.

An eagle-two at the 11th pulled the contest level, with Hull bogeying the 14th and 16th to lose both holes before having her defeat convert when Korda claimed the penultimate hole.

Pedersen, whose boyfriend caddies for Kang, was never behind in the match and made sure of the vital half point by being three up with three to play.

Kang won the 16th and 17th and also birdied the last, holing an effort from 30 feet, but Pedersen followed her in to seal the full point and complete a 15-13 victory for Team Europe.