"One person doesn't win it, we needed all 12 of them, so just congratulations to the whole team," says Catriona Matthew after Europe defeat United States 15-13 following Monday's Solheim Cup singles; USA captain Pat Hurst says golf was the big winner as well as Europe

Europe captain Catriona Matthew was quick to pay tribute to her whole team of 12 after they won the Solheim Cup on United States soil for just the second time.

The visitors held off an American fightback in Monday's singles to triumph 15-13 at Inverness Club in Ohio.

After early wins for Leona Maguire, Madelene Sagstrom and Celine Boutier, and half points for Anna Nordqvist and Nanna Koerstz Madsen, Europe ensured they would retain the trophy when Matilda Castren defeated Lizette Salas at the 18th.

How Europe retained the Solheim Cup

Report and highlights from a dramatic 15-13 victory for Team Europe in Toledo, Ohio.

The main party was then kept on hold for a while until the outright victory was confirmed when Emily Pedersen wrapped up a 1up success over Danielle Kang on the final green.

"I think we were a team of 12. They all contributed," said Matthew. "One person doesn't win it, we needed all 12 of them, so just congratulations to the whole team.

"Obviously two years ago at Gleneagles in Scotland was fantastic, but this time in America we were up against it. The Americans were a fantastic team this year. They played hard.

"We just perhaps holed a few more putts and were lucky we came out on top. I'd like to thank my team. I had a fantastic team, and the captains and our helpers and our caddies and just everyone, the LET staff. We've been one big team, and we've loved every moment of it.

"Today we got off to such a good start winning three points in the first few games, and then it looked pretty close. We knew it was going to be close, and then Matilda obviously holing that fantastic putt on 18 to get her full point, and then Emily closing out on 18 was just a dream come true stuff really.

"We knew it was going to be tough this year with really no European fans, and they just dug in deep. Especially yesterday (Sunday) even when the crowds were getting pretty light, really hung in, came out with a great finish." 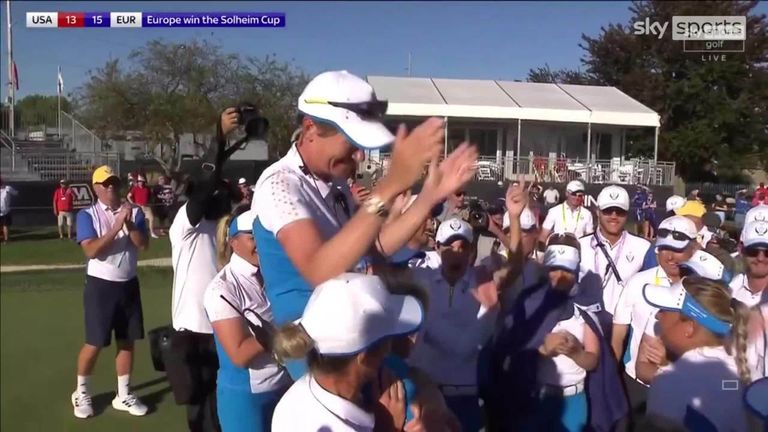 She said: "Team Europe played great, and someone has to lose, which is not fun, but it's just the way it is, and I think women's golf definitely was the big winner along with Team Europe."

Hurst insisted she would not do anything different given a second chance.

"There's nothing we can do," she added. "They all played well. Team Europe played just a little bit better than us, and that's how it became 15-13.

As for the future, there were contrasting views from the two captains about the next Solheim Cup in Spain in 2023.

"Of course I would love another shot at it, but I just don't know if that's going to be possible," said Hurst. "But I love this. I love being part of it. Whatever happens happens. I would do this for the rest of my life if I could."

However, when asked the same question Matthew replied: "Nope. That's over to someone else."