"I hit like a 52-degree because a 60 might have gone over the back of my head, and you know, just tried to flick it right underneath and hit it as hard as I could, as high as I could," says Jordan Spieth; watch the Ryder Cup live on Sky Sports Ryder Cup 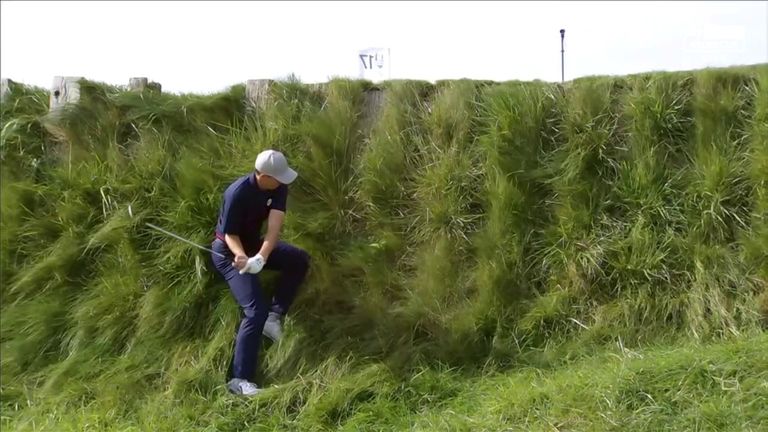 Jordan Spieth produced the shot of the morning as the Ryder Cup got underway with the foursomes on Friday, but unfortunately for him it was in a losing cause for the United States.

Spieth conjured up a miraculous recovery from thick grass down a hill off the par-three 17th green at Whistling Straits, his ball taking the aerial route and landing within 10 feet of the hole.

The 28-year-old also did well to avoid ending up in Lake Michigan as the backward momentum from the shot saw him run down the bank before stopping just short of the water.

However, his playing partner Justin Thomas then missed the birdie putt which handed the European duo of Jon Rahm and Sergio Garcia a 3&1 victory, although the USA won the other three morning foursomes.

Spieth said: "It's kind of one of those shots that you practise as a kid for fun, and you don't ultimately want to have it. And the chances of it going there, you could roll a thousand balls off the green, and it's not going it stay where it was.

"I hit like a 52-degree because a 60 might have gone over the back of my head, and you know, just tried to flick it right underneath and hit it as hard as I could, as high as I could. You know, it ended up right on a crown where it was a tough putt, and I think it's maybe a situation, first one in wins, and we just kind of got a really tough break there."

As for suggestions he had overplayed his scuttle down the hill, Spieth added: "I don't think I exaggerated that fall, you know how steep that is. Once I started moving, I was like, I've got to keep moving until I find a flat spot."

Click play on the video above to see Spieth's miraculous recovery shot at the 17th...