Ryder Cup: Rory McIlroy in tears as he says "I should have done more" to help Europe

Rory McIlroy's emotions got the better of him as he explained he felt he had let his team-mates down as Europe slid towards a record-breaking Ryder Cup defeat at Whistling Straits.

Rory McIlroy could not hold back the tears as he reflected on his disappointing performance at this week's Ryder Cup, although he was relieved to end a run of five straight defeats in his singles match.

McIlroy was woefully out of form over the first two days and suffered heavy defeats in his three matches, two of them alongside Ian Poulter and one with Shane Lowry on day one at Whistling Straits - with each lasting no longer than 15 holes.

He was left out of the Saturday morning foursomes, the first session he has missed in his Ryder Cup career, but he ended a bad week on a high note with a spirited 3&2 victory over Xander Schauffele in the top singles match on Sunday.

But as he prepared for his post-match interview with Sky Sports, a glance at the leaderboard showed the scale of the humiliating defeat Europe were facing, with Team USA ahead in nine of the remaining matches at that time and on course for a record-smashing win.

McIlroy's composure deserted him as he struggled to gather himself to speak to on-course reporter Henni Koyack, and his initial thoughts were how he felt he had let his team-mates down with his performance.

"I love being a part of this team, I love my team-mates so much, and I should have done more for them this week," said a highly-emotional McIlroy. "I'm glad I put a point on the board for Europe today, but I just can't wait to get another shot at this.

"It is by far the best experience in golf, and I hope the boys and girls watching this today will aspire to play in this event, or the Solheim Cup, because there's nothing better than being a part of a team, especially with the bond that we have in Europe.

"No matter what happens after this, I'm proud of every one of our players this week. I'm proud of our captain, our vice-captains, and I just wish I could have done a little more for the team. It's been a tough week."

McIlroy broke down again moments later when speaking to the Golf Channel as he reiterated his pride at being part of the European team, and he vowed to bounce back and make many more appearances in the competition.

"I'm just incredibly proud to be a part of this team, to be a team-mate of all these guys," he added. "We've had a great time. You know, it looks like it's not going to pan out the way we want on the golf course, and I've been extremely disappointed that I haven't contributed for more the team.

"It's been a tough week, but the more I play in this event, the more I realise that it's the best event in golf, bar none. I love being a part of it. I can't wait to be a part of many more. 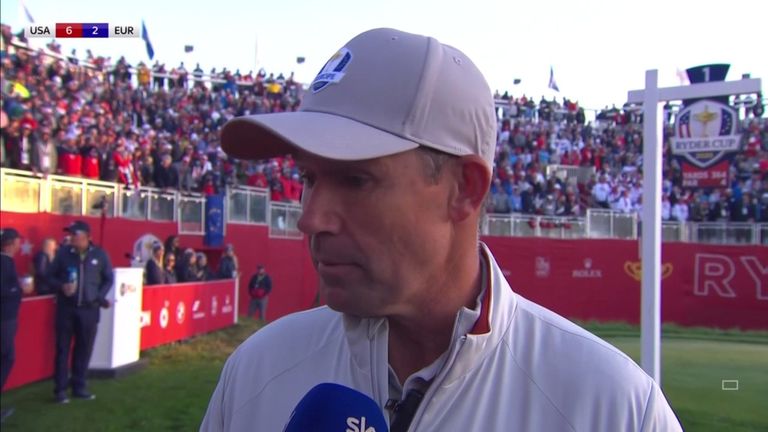 "I don't think there's any greater privilege to be a part of one of these teams, European or American. It's an absolute privilege. I've got to do this six times, and they have always been the greatest experiences of my career.

"I have never really cried or got emotional over what I've done as an individual. I couldn't give a s***. But this team, and what it feels like to be a part of, to see Sergio break records, to see Jon Rahm come into his own this week, to see one of my best friends, Shane Lowry, make his Ryder Cup debut.

"All that, it's phenomenal and I'm so happy to be a part of it. As I said I'm disappointed that I didn't contribute more this week, but you know, in two years' time, we'll go again and we'll give it another go again.

"It sucks losing. It sucks not being able to be competitive. I'm glad I put a point on the board for Europe today and that was my goal and mission and I was able to accomplish that. But when I look back on this week, it will be a case of lost opportunity.

"We've been up against it, but the American Team have been total class in terms of how they played. You know, they have been dominant. They have been really, really good and we haven't been able to put up as much of a fight as we want.

"I think I'm emotional, as well because I wanted to do this for Padraig, too. It's his captaincy, and he's had a hell of a career, and It would have been an unbelievable thing to cap off with a winning Ryder Cup.

"For me I haven't been able to contribute as much as I wanted to that but it's still such a great experience to be part of these Ryder Cup teams and this will just fill the fire even more for us in two years' time in Rome."