"I am simply thrilled to be named Solheim Cup captain, this is the biggest honour of my career." Suzann Pettersen is relishing the chance to lead Europe to a third straight victory over Team USA in 2023. 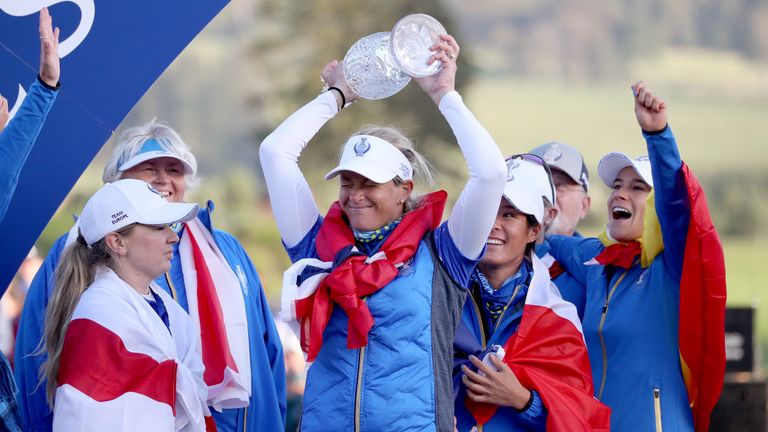 Suzann Pettersen has been unveiled as the Team Europe captain for the 2023 Solheim Cup in Spain.

Pettersen replaces two-time skipper Catriona Matthew, who has led Europe to back-to-back victories over Team USA at the Inverness Club earlier this year, and two years ago at Gleneagles with Pettersen holing the clutch winning putt on the final green.

The Norwegian retired from professional golf shortly afterwards, and she has now been charged with the responsibility of guiding Europe to an unprecedented third straight victory in the biennial competition.

Pettersen has a rich history in the Solheim Cup as a player having made nine appearances, including her memorable final cap at Gleneagles when she returned to action after 18 months on paternity leave to clinch her fifth victory as a European player.

The two-time major champion announced her retirement in the post-tournament press conference and claimed: "It doesn't get any better than this", although Pettersen remained in close involvement with the Solheim Cup as one of Matthew's assistant captains in Ohio this year.

"I am simply thrilled to be named Solheim Cup captain, this is the biggest honour of my career," said Pettersen, a winner of 21 professional titles worldwide in her illustrious career.

"My best golfing memories are from the Solheim Cup. You are out there with your team-mates, your friends, and you all work for one goal. You fight for your friends and you share incredibly precious moments.

"I have played with and under many wonderful captains since I made my debut in the competition 19 years ago. Every Solheim has been special in its own way. You make friendships for life and memories you'll never forget.

"Every captain is different and brings their unique skills to the table. I am very much looking forward to bringing my experience to the role and working hard over the next 22 months to defend the Cup on Spanish soil."

Alexandra Armas, chief executive of the Ladies European Tour, added: "We are delighted that Suzann has accepted the role of captain for the 2023 Solheim Cup.

"She has been the heart and soul of the European team for almost 20 years and, with 21 points earned from nine appearances, her record speaks for itself. With her passion for the Solheim Cup, her love for the game of golf and her competitive fire, she will be an inspiration to the team and to fans around the world."

The 18th edition of the Solheim Cup will be played at Finca Cortesin in Andalucía from September 18-24, 2023.