Na threatened a sub-60 round to set the pace in Hawaii, while Furyk made an ace from 187 yards at the par-three 17th; Cameron Smith seven back as he chases back-to-back PGA Tour wins - watch the Sony Open live from 5pm on Friday on Sky Sports Golf 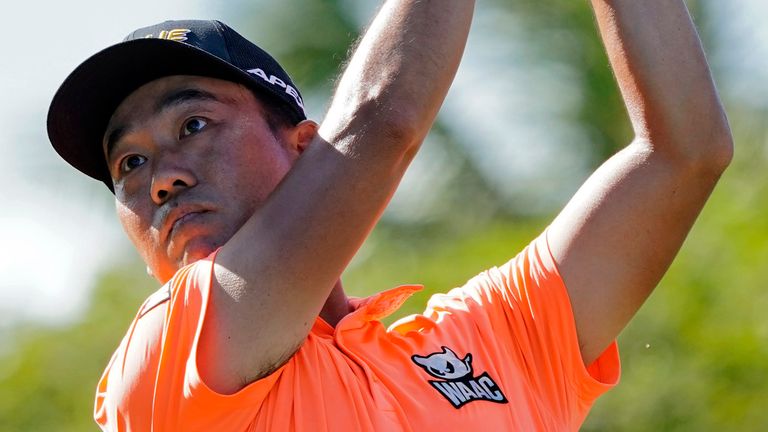 Defending champion Kevin Na flirting with a history-making round to grab the early lead of the Sony Open, as Jim Furyk impressed with a hole-in-one.

The world No 27 made the dream start to his title defence by carding a nine-under 61 at Waialae Country Club in Honolulu, posting an eagle and seven birdies in a blemish-free round to jump a shot clear of Furyk and compatriot Russell Henley.

Na followed back-to-back birdies from the second with successive gains from the fifth and an eagle three at the par-five ninth, with further birdies at the 10th and 12th raising the possibility of a '59 round' on the par-70 layout.

Picking up right where he left off.

The American's hopes of a sub-60 score ended with a run of five consecutive pars from the 13th, although Na was able to get up and down from a greenside bunker at the par-five last for a closing birdie to move top of the leaderboard.

"I played unbelievably well," Na said. "I did everything well today and my iron play was amazing. My distance control has been great. I had a chance for a 59. I gave it all I could. I'm a little disappointed my putts didn't fall, some of the good putts that I hit didn't fall. But it's still a good round."

Furyk rolls back the years in Hawaii

Furyk recovered from a three-putt bogey on his opening hole to set the early clubhouse target, with the 51-year-old closing out an eight-under 62 by following three consecutive birdies from the 14th with a stunning hole-in-one at the par-three 17th.

"I thought I was in between clubs but [caddie Michael "Fluff" Cowan] assured me it was a 6-iron for me, it was the right club and I had it teed up a little bit trying to get the ball in the air and hit down on it," Furyk said. "Caught it just a smidge high in the face...I wasn't quite sure I caught enough of it to cover it.

"It carried on the green probably two or three yards, landed in a perfect spot and then released towards the pin. I guess that's kind of the line I was looking. You never want to miss that green right. Want to make sure I hit it solid to cover."

Kevin Chappell, down to his last five tournaments on a medical exemption stemming from back surgery, is alongside Furyk on eight under after a blemish-free start, while former Sony Open winner Patton Kizzire and Ireland's Seamus Power are in the group of five players sitting two strokes back.

Cameron Smith, who won last week at Kapalua with a record score to par at 34 under, was among those playing in the afternoon as he tries to join Justin Thomas (2017) and Ernie Els (2003) as the only player to sweep the Hawaii swing.

Smith birdied two of his last three holes to join compatriot Marc Leishman in posting a three-under 67, with England's Aaron Rai and Scotland's Russell Knox also in the group tied-40th after the opening day.

Watch the Sony Open throughout the week live on Sky Sports. Live coverage continues on Friday with Featured Groups from 5pm on Sky Sports Golf, ahead of full coverage of the second round from midnight.