How does golf remember Tiger Woods' epic 2008 US Open victory? Bryson DeChambeau and Justin Thomas were among those to share their memories ahead of this year's contest at Torrey Pines.

The US Open has returned to Torrey Pines this year for the first time since Tiger Woods' famous victory at the course in 2008.

Thirteen years ago, Woods hobbled his way to his third US Open victory and 14th major title as he defeated Rocco Mediate on the first hole of sudden death following an 18-hole play-off, playing 91 holes practically on one good leg.

Woods' heroics have, understandably, been the subject of much discussion ahead of this year's tournament and here is what some of the players have had to say...

Phil Mickelson: "I remember Tiger bogeyed or double-bogeyed the first hole, and I think he did it both days and still won the tournament.

"I thought that was pretty inspiring the way he didn't let that affect him. He stayed to his game plan, stayed focused, stayed patient, and ended up kind of picking his spots where he could get a shot back here or there, and he did, and he ended up winning. That's impressive."

Justin Thomas: "I watched it. It was on last week. I still don't know how he won. He had no business winning that tournament. Rocco played better than he did. He just hit some key drives when he needed to or just little things here and there, but just kept making those putts. That's what you do to win US Opens.

"I think it was something that I did not remember. I remembered a majority, if not all, the shots that I was watching, but I just didn't remember the amount of four and five-footers he made that really seemed to be irrelevant in the telecast, like they weren't really talking about that much, but he made one on 16 on Sunday that he chipped past the hole, and it was about five feet, and he made it. That's one, if he misses that, the tournament's over. Then same thing with 15 on Monday and then 16 on Monday. It just was so many little putts.

"Everyone always talks about the one on 13 and 18 on Saturday and the one on 18 on Sunday, but that was something that stuck out to me."

Jordan Spieth: "[The injury was] something you shouldn't be playing golf on, then he went and won the US Open on it, which if you are having to hack out of this rough, and obviously it's one of the tougher walks as well, that's something else.

"The up and down on the 72nd hole from the rough, and obviously one of the most memorable putts in major championship history. I remember where I was watching it, and it was just so exciting. Obviously, he was an inspiration for all of us younger generation out here to go out and practice a putt like that the whole next week to try to pretend it was to tie or win a US Open."

Brooks Koepka: "I mean, it was pretty impressive, but I would say the one at the Masters probably was number one, just for me. I mean, I was playing in it. I guess that probably made a difference. But I remember being in school so I couldn't watch the play-off on Monday. It was exciting to watch. That's got to be up there for him. Definitely one of the top ones." 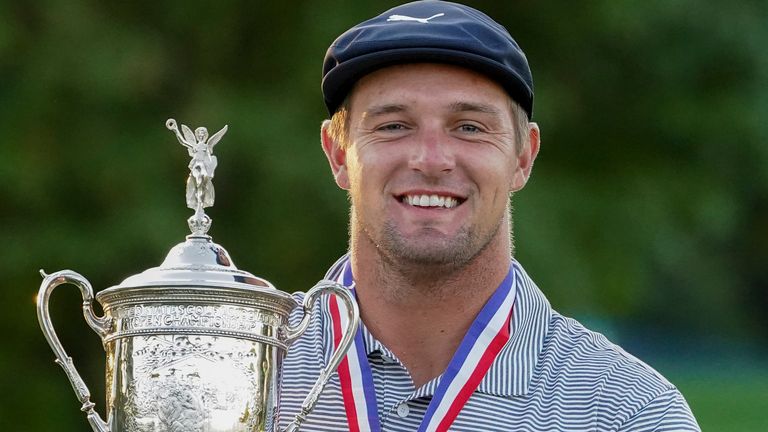 The US Open returns to Torrey Pines next week, and you can watch all four days exclusively live on Sky Sports

Bryson DeChambeau: "I would say the putt on 18 was very memorable. Obviously, him chipping in on 17, I think it was a Saturday, and making a couple of eagles on 13, those are pretty cool. But 18, making that putt knowing he had to make it, and there was nothing more to it. You just had to make it, and he was able to do it.

"I'd say the amount of times that human being has willed golf balls into a hole, it goes beyond conscious comprehension. It is beyond miraculous what he can do with the golf ball and what he can do for the game of golf in general. That's why I wish he was here, but I think that we are all keeping him in good spirits and pumping him up when we can. His memory, his thought, my thought of him out here, will keep pushing me forward to play my best."

Lee Westwood: "Yeah, missed the fairway, when I really needed to hit the fairway. Both of us did, myself and Tiger. We both laid up. Tiger laid up in the rough. I can't remember where I was. I think I laid up in the fairway actually but was between clubs.

"Hit the easy one rather than going flat-out with a lob wedge, and it came up about 18 feet, 20 feet past the hole, and had a left-to-righter down the hill. Hit what was quite a good putt, and it just hit something. The greens were getting a bit iffy at that stage of the day, and it hit something and went a bit left instead of carrying on and breaking left to right. Obviously missed on the left-hand side, then stood there and watched Tiger hole his putt."