The golf season reaches an exciting climax this month, with the conclusion to the European Tour, LPGA Tour and Ladies European Tour campaigns all live on Sky Sports Golf 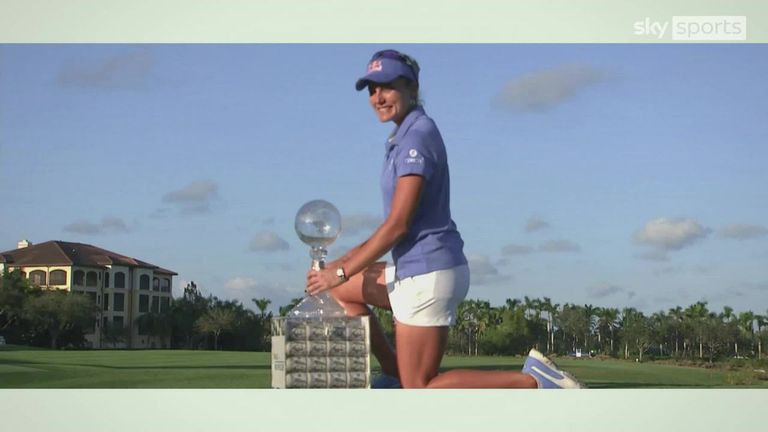 The golf major season may be over until 2022, but there’s a bumper month of live golf to look forward to this November on Sky Sports.

The European Tour, LPGA Tour and Ladies European Tour seasons all reach their climax this month, with star-studded fields expected for those events and big prize purses on offer.

There's PGA Tour action and high-profile amateur events to enjoy live on Sky Sports Golf, plus bonus coverage from the conclusion to the Challenge Tour and PGA Tour Champions campaigns.

Here are five storylines to follow over the next few weeks…

Exciting finish on the Race to Dubai

Less than a month to go until the world’s greatest players battle it out for the DP World Tour Championship and Race to Dubai crown. The countdown is on. #DPWTC @DPWTC @EuropeanTour pic.twitter.com/ymxtsbjjaD

The Portugal Masters and AVIV Dubai Championship offer the final two opportunities for players to secure their playing privileges for next season, with only the top-50 players on the Race to Dubai after those events then eligible for the season-ending DP World Tour Championship.

Champion Golfer Collin Morikawa will head into the season finale top of the standings after following his WGC-Workday Championship win in February by claiming a second major title at The Open in July, with Billy Horschel close behind after his success at the BMW PGA Championship.

Both players will be looking to become the first American winner of the Race to Dubai, while world No 1 Jon Rahm - a two-time champion at the DP World Tour Championship - is still in the running to end 2021 top of the Order of Merit.

Defending champion Matt Fitzpatrick will return looking to become the first three-time winner of the season finale, with Rory McIlroy, Tyrrell Hatton and Viktor Hovland among the others set to feature at Jumeriah Golf Estates.

Battle for top spot on the LPGA Tour

Jin Young Ko and Nelly Korda have dominated women's golf over the past season, with the pair challenging to end the year as No 1 both in the world rankings and on the LPGA Tour over the final two events of the campaign.

Korda appeared firm favourite to hold top spot in both categories after registering three LPGA Tour titles in the space of four months during the early part of the season, with the American then going on to win gold for Team USA at the Tokyo Olympics.

The 23-year-old has since dropped to world No 2 after Ko's victory at the BMW Ladies Championship, her fourth win in seven starts during a remarkable run of results on the LPGA Tour.

Both players are scheduled to feature at the Pelican Women's Championship and the season-ending CME Group Tour Championship, where Ko is defending champion, with the world's top two the firm favourites to end the campaign top of the LPGA Tour standings.

Plenty to play for on the Ladies European Tour

Royal Greens Golf & Country Club will host both Middle East tournaments, including the fourth and final event of the Aramco Team Series, before Los Naranjos Golf Club hosts the season finale for the first time.

Thai teenager Atthaya Thitikul holds a commanding advantage in the standings having won the Tipsport Czech Ladies Open and the VP Bank Swiss Ladies Open earlier in the season, with Sanna Nuutinen and Stephanie Kyriacou sitting below her in the rankings.

English duo Charley Hull and Georgia Hall, along with AIG Women's Open champion Anna Nordqvist and Solheim Cup team-mate Emily Kristine Pedersen, are all due to feature over the coming weeks.

A chance for early FedExCup moves

Rory McIlroy and Hideki Matsuyama have both made winning starts to their 2021-22 PGA Tour seasons, claiming victories at The CJ Cup and the Zozo Championship respectively, with others having the chance to pick up some early FedExCup points over the coming weeks.

Four-time major champion Brooks Koepka and former Open winner Shane Lowry are set to be part of a strong field at the Mayakoba Golf Classic in Mexico, with Justin Thomas and defending champion Viktor Hovland also scheduled to feature.

The Houston Open and the RSM Classic are the final two official PGA Tour events of the calendar year and are both live on Sky Sports Golf, with early-season points often crucial in helping players to qualify for the FedExCup Playoffs the following summer.

Best of the rest…

European Tour cards are up for grabs at the Rolex Challenge Tour Grand Final, where only the top 45 players in the season-long standings can compete and try and secure promotion to the top tier.

Jumping in 🦘@ManasseroMatteo finished in a tie for third at the Challenge Costa Brava to climb 20 places to 44th on the Rankings and secure his spot at the #RolexGrandFinal. pic.twitter.com/gdt355jRcm