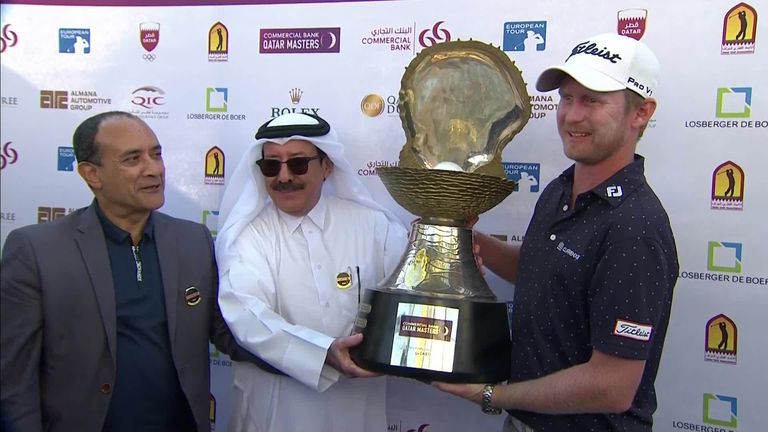 South Africa's Justin Harding is within sight of securing a Masters debut after claiming his first European Tour title in the Qatar Masters.

Harding birdied three of the last four holes in a closing 66 to finish 13 under par, two shots ahead of a nine-strong group which included compatriots George Coetzee, Christiaan Bezuidenhout and Erik Van Rooyen and England's Oliver Wilson.

Wilson, who began the day with a one-shot lead, carded a closing 71 at Doha Golf Club.

Harding, who won twice on the Asian Tour and twice on the Sunshine Tour in 2018, is projected to move just outside the world's top 50 when the rankings are updated on Monday. The top 50 on April 1 receive an invite to the year's first major at Augusta National.

"It was a really good day, hugely rewarding," Harding said. "I feel as though I've been putting in a lot of hard graft trying to improve my game to get to those next levels and to finally notch one on the European Tour is awesome.

"It means I get into the events I'd like to be into again. I'm looking forward to playing in some bigger events and keeping the form going."

Harding was three shots off the lead at the start of the day and although he birdied three of the first four holes, bogeys at the sixth and seventh looked to have derailed his title challenge.

"I think my biggest deficit coming from behind was one so to have to sit and wait around I didn't enjoy it, but I'm glad it happened," Harding told Sky Sports.

"I'll be honest, the bogey I made on 13 yesterday was key to me turning it around. I hit a terrible seven iron into the water there but to get it up and down still kept me in the game.

"I made a couple of birdies coming in and turned what was a bit of a struggle into a one over par [round] and was only three shots back going into today. That was huge."