In an extended interview with Sky Sports News, MacIntyre reflects on his 2021 highs and lows, his major ambitions for the year ahead and why he thinks he can make a Ryder Cup debut for Team Europe in 2023. 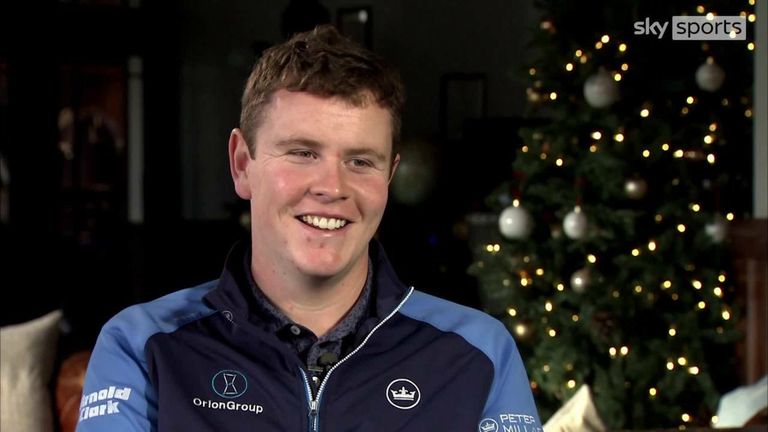 Robert MacIntyre feels his 2021 season was a success and insists he doesn't regret the decision to chase a PGA Tour card instead of trying to qualify for Europe's Ryder Cup side.

MacIntyre ended a career-high ninth in the European Tour's season-long standings, despite failing to register a victory over the campaign, with a tied-fourth finish at the DP World Tour Championship one of five worldwide top-10s over the past 12 months.

The Scot was in a strong position to challenge for a Ryder Cup debut after a tied-eighth finish at The Open in July, only for MacIntyre to elect to chase a PGA Tour card over the summer instead of staying in Europe to try and earn vital qualification points.

MacIntyre failed in his pursuit of earning PGA Tour playing rights via the Korn Ferry Tour finals, missing the cut in both events, with the 25-year-old's Ryder Cup hopes then ended with another early exit at the BMW PGA Championship - the final qualification event.

"I decided to take a shot at what was best for my own career and that was playing the Korn Ferry Tour finals," MacIntyre told Sky Sports News. "I didn't have the best of two weeks out there.

PLEASED TO SAY THAT...👍🏼@robert1lefty ends up tied 15th @WGCFedEx to surpass the threshold for Special Temporary Membership of @PGATOUR

"You know what, looking back, If I had another shot at doing it this year or next, would I do the same? Absolutely. Golf is an individual sport for 99.9 per cent of the time and everyone's goal is to get a PGA Tour card and compete against the players in the world.

"I gave it my best shot and fell just short, but we'll get another chance. It was disappointing not to be there [the Ryder Cup], but at the end of the day I didn't play well enough when I had to."

MacIntyre has dropped out of the world's top 50 but is already confirmed a spot in all of next year's majors and has lofty ambitions, wanting to challenge for one of golf's biggest prizes and also already thinking about the prospect of qualifying for Europe's 2023 Ryder Cup team.

"I set my expectations really high," MacIntyre added. "I'm a dreamer, so you're always going to set goals high. I'm a bit disappointed I didn't get a win [in 2021], but I had some great performances again in majors and get to do them all again next year.

"Over the last two years I'd say my performances were their best when I'm out my comfort zone at majors and big events, which is where everyone wants to play golf. When you're in a position where you're competing in them, then you want to take it and grab it with both hands.

"I want to compete in one of them, like really have a chance going into the back nine on a Sunday. If I can do that, then it's a big step for my career. I'd say I had a chance this year at The Open with six holes to go and I probably tried to push too hard and it didn't go my way."

"I sometimes don't people what my goals are but I set them as high as I can, so if you just miss them then it's still going to be a good season. One of my main goals now, is to be in that [Ryder Cup] team for Italy [in 2023]