Sung Kang enjoyed an incredible birdie blitz as he equalled the Trinity Forest course record and opened up a commanding lead at the AT&T Byron Nelson.

Kang made 10 birdies in his stunning second-round performance, including six in a row, and kept a bogey off his card as he raced to 12 under and into a four-stroke lead at the halfway stage in Dallas.

Matt Every and Tyler Duncan, whose wayward second to the 13th hit his own wife in the head, lead the chasing pack while pre-tournament favourite Brooks Koepka recovered from a slow start to birdie four of the last five holes to close within five of the leader.

But Kang stole the show in chilly conditions early on the second day, almost pitching in for eagles at the first and fifth before continuing to pepper the pins over the next four holes - his longest birdie putt being from just inside eight feet at the short eighth.

The South Korean then holed from 21 feet for another gain at the 10th before his run came to a halt at the next, and he did well to avoid a blemish on the 12 green when he nailed a clutch par putt from 12 feet.

Kang got back on the birdie trail at 13 and 14, and another at 16 left him needing two more at the last two holes for a 59, although he settled for a par at 17 and made a further save on the last when he left his first putt from long range 15 feet short.

"I knew it was going to be really cold and windy, so I tried to prepare how far the ball was going to go this morning and it worked out great," he said afterwards.

"On 16th hole I knew if I could make two birdies it would be 59. But conditions were so hard, and it's tough if you try to force it. So I just tried to hit it within 15 feet and if I make the putt, good. If I don't, make par and get me going. I still think it was a great round."

Duncan's unfortunate mishap on the 13th, which he was unaware of until after he finished, led to his only bogey of a six-birdie 66 as he climbed to 12 under along with Every, who birdied the last to complete back-to-back rounds of 65.

Koepka, who defends his PGA Championship title at Bethpage Black next week, admitted he felt "a little out of sorts" early in his round as he followed a birdie at the first with two bogeys over the next three holes.

But the three-time major champion regrouped and chalked up another birdie at the long seventh before holing from 25 feet on the 11th green to get under the card for the day.

The 29-year-old drained further lengthy putts at 14 and 15, and his putter stayed hot as he converted chances on each of the next two holes before shaving the cup at the last and settling for a par and a 66.

"The putt on 11 was important to get things started," he said. "To see that go in from 25 feet is always nice but it definitely spurred me on for the last few holes.

"I just kept grinding, you never know what's around the corner. You make four in a row like that, and I wish I would have made the one on the last. Solid round, just trying to keep pace." 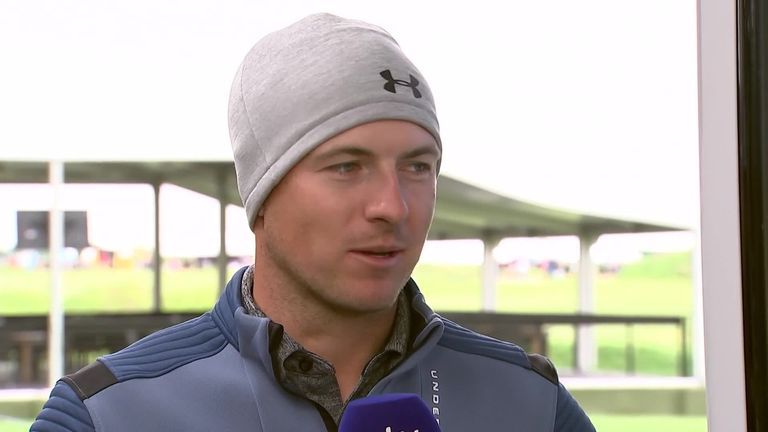 Scotland's Martin Laird is a further two shots adrift after he birdied three of his first four holes and went on to fire a bogey-free 66, while Jordan Spieth insisted he was close to getting back to his best as he rose to seven under.

Spieth took his birdie count for the two rounds to 14 as he matched his tally of seven from day one, although he also double-bogeyed the 18th when it took him four shots to find the putting surface having duffed his first chip from the left of the green.

Henrik Stenson struggled to make much happen on the greens in a three-birdie 69 which left him 10 shots behind Kang going into the weekend along with his 2016 Ryder Cup team-mate Thomas Pieters, who followed his opening 70 with an encouraging 66.