The result takes KH Lee into the top 30 of the FedexCup standings and qualifies him for next week's PGA Championship at the Ocean Course at Kiawah Island; the 29-year-old has previously played in two majors

KH Lee finished on 25 under par to win the AT&T Byron Nelson by three shots and clinch his first PGA Tour victory.

The result took the South Korean into the top 30 of the FedexCup standings and qualifies him for next week's PGA Championship at the Ocean Course at Kiawah Island in South Carolina.

The 29-year-old has previously played in two majors, missing the cut at the US Open in 2014, more than three years before his second PGA Tour appearance.

Lee started the day on 18 under and birdied three of the first four holes, carding further front-nine birdies on the sixth and eighth before dropping a shot on the ninth. A bogey on the 16th then cancelled out another birdie on the 12th, but a two on the par-three 17th and a tap-in for birdie on the last put three shots between him and third-round leader Sam Burns, who finished second.

Irishman Seamus Power had been in contention in the final round, carding a five-under front nine on Sunday afternoon, but the Irishman then double-bogeyed the 13th and bogeyed the 14th to slip out of contention late on.

He finish on 18 under for a share of ninth place along with Doc Redman, Jhonattan Vegas and local boy Jordan Spieth.

The leaders had started several hours early to try to get in the round with increasing rain in the forecast, and they got through most of the front nine before the heavier rain arrived. They slogged through a steady downpour for about an hour when a lightning strike forced a delay Sunday at TPC Craig Ranch.

Most of the standing water was gone when play resumed nearly two-and-a-half hours later, and Lee's own resumption saw him miss his par putt on the 16th to cut his lead to two, before he finished with the pair of birdies for a six-under 66.

Burns struggled to a 71 to finish at 22 under, a shot ahead of 2011 Masters champion Charl Schwartzel, Daniel Berger, Patton Kizzire and Scott Stallings. Troy Merritt and Joseph Bramlett finished two more back at 19 under.

When the delay hit, Spieth already knew he was going to fall short again in his hometown event, played on its third course in the past four Nelsons in McKinney, about 30 miles north of Dallas.

Spieth, three back to start the day, shot 71, giving him his first top-10 at the Nelson 11 years after he was a contender on Sunday as a 16-year-old when the course was at its home of more than 30 years at the TPC Four Seasons.

Whatever Lee had rehearsed to celebrate his first win was lost in the moment.

"Before a lot of imagine when I win, like what is that," he said through a translator. "Like, yeah, like fist pump or I imagine a lot of things, but too excited over there. Almost forget everything. So excited, yeah."

The South Korean said afterwards a change in putter had a large part to play in the victory: "It was a big help for me - I love that putter!" 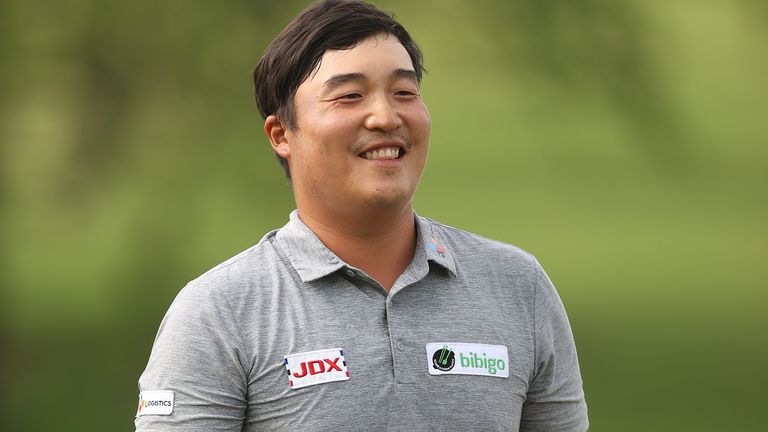 Burns was going for his second win this month after winning the Valspar Championship on May 2, but he was happy despite his second-place finish.

"I think the biggest thing for me is just knowing my game is in a good place. It's in a good spot enough to where I can contend," the 24-year-old from Louisiana said.

"So that's cool for me, just to see some results for some of the stuff I been working on back home. All in all, a great week."

He also was happy for Lee.

"Yeah, he played awesome. I was really proud of him," Burns said. "When it was tough, he hung in there and he got off to a great start. It was kind of gettable in the beginning.

"Got off to a really fast start, and then kind of midway through got tough for everybody, and he kept hitting one shot after the next and never gave anybody a chance. It was fun to watch."

When asked what he got out of his own four rounds, Spieth said: "I guess I got back into tournament golf. Played well, hit a lot of good shots.

"You know, rusty mistakes here and there, and then I just didn't putt as well as I would like to. So, stroke was a little off to start, and I'll work on that for next week for sure.

"But coming into the week if you told me top 10, I would probably take it. I didn't know where anything stood."