Ryder Cup 2020: Padraig Harrington reveals 'Covid-19 envelope' will be in use for first time

There will be a special envelope used at the 2020 Ryder Cup in case a player is ruled out of the singles on Sunday due to Covid-19; watch the Ryder Cup on Sky Sports, with the Day 1 Foursomes beginning at 1pm on Friday 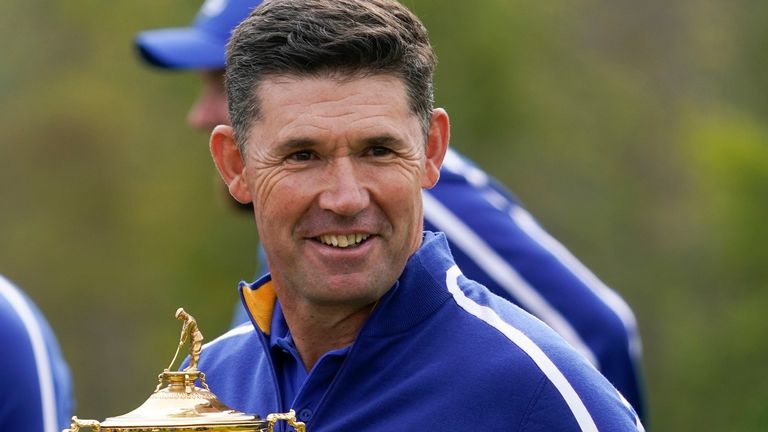 Padraig Harrington has revealed there will be a "Covid envelope" at the Ryder Cup in case a player is forced to withdraw from the tournament after a positive test.

There has been an "envelope rule" at the Ryder Cup for the last 40 years which comes into use if a player gets injured and is unable to compete in Sunday's final singles session.

The team captains place the name of a nominated player in an envelope prior to the start of the singles matches, and they are closely guarded and only opened if required, otherwise they are destroyed.

At Whistling Straits this week there will not only be an envelope in case of injury, but also in case of a Covid-19 withdrawal.

"While we've asked, it's still not completely clear what happens if we have a Covid outbreak of a number of players, but for one player it's pretty straightforward. Obviously the first two days, it's four players sit out… so there are no issues on those two days, but obviously on Sunday you start losing a few players to Covid, it does affect the match in some way. But one is in a Covid envelope for sure.

"It's the exact same as an injury envelope. The person that goes in the envelope, the captain decides, and nobody ever knows. We hope that stays that way. But we've had a few injury pull-outs over the year, so it would be just very similar to that. No real difference in how it works."

This will be the first Ryder Cup played since the Covid-19 outbreak started, with the event postponed from last year due to the pandemic.

Harrington says it is "possible that you could have two different names" in envelopes in case one pulls out with injury and one is taken out because of Covid.

"You have to be prepared for these things, and as I said, it's been there all along, so it's nothing really new. It's obviously highlighted because of Covid, but there's always been a name in the envelope for an injury, just like coming into this we were asked to be aware that having somebody as a reserve, somebody as a backup who you would bring along, and what happens if somebody pulls out because of Covid. Because, you know, it's something that could happen in these times."

There's also the question of what would happen to the status of the Ryder Cup if there was an outbreak among either team over the three days.

"This is certainly something that I'm sure that is causing a lot of thought and a lot of time thinking about what would be too many and what would be sustainable. But again, it's not really for the captains. It's more for the running of the event."

Asked about his picks for the fourballs and foursomes, Harrington says he will go with the "right partnerships" and is unlikely to make too many late changes.

"No, I'm not a great believer in judging people off a couple of relaxed days' practice. So no, my picks are definitely based on the right partnerships, what we would have had in mind but narrowed down now.

"As we've got here, narrowed down even further. I wouldn't think a lot is changing in my head and my vice captains' head between now and Friday, no."