The Open: Four controversies from the action at Royal Portrush

The 148th Open at Royal Portrush has been hailed as a great success and it provided an extremely popular winner in the shape of Irishman Shane Lowry.

However, the tournament was not without its controversies with a major talking point emerging from each of the four days' play.

David Duval's 91 drew plenty of attention in the opening round and the second round saw Bob MacIntyre's 'fore' spat with Kyle Stanley.

Xander Schauffele's driver was up for discussion after the third round, while JB Holmes' slow play was a feature of the final round.

Duval, the 2001 champion, sparked a debate about whether or not he should have played after carding rounds of 91 and 78 to finish on 27 over and miss the cut by 26 shots.

The 'lowlight' of his first round was a 14 on the par-five seventh - the highest score on one hole at the Open for 69 years - where he was penalised for playing the wrong ball following three errant drives.

Duval revealed after the round he almost withdrew from The Open due to tendinitis in his left arm, but vowed to play through the pain and complete his second round on Friday.

The 47-year-old American did play on Friday and improved his score by 13 shots, but should he have declined his invitation to play in the tournament?

MacIntyre was making his debut in The Open and the 22-year-old went on to become the first Scotsman in 140 years to finish in the top 10 on his debut by closing with a three-under 68 to tie for sixth on five under.

He carded a 72 in the second round but it was an incident at the 17th hole that propelled his name into the headlines.

MacIntyre was furious with playing partner Stanley for not shouting a warning of 'fore' after a wayward drive into the crowd which resulted in a direct hit on the mother of Greg Milne, who is MacIntyre's caddie.

Mrs Milne took the blow on her hand which caused painful swelling, and MacIntyre remonstrated with the American over the incident which he described as "not too pleasant".

Stanley later defended his actions as well as describing the incident as a "non-issue" as several other people had shouted a warning.

"He's a young player. I've been out here a while. So I don't feel the need to be schooled on the rules of golf or what to do when you hit a shot off line," said Stanley.

Schauffele was another unhappy American on Saturday evening when he criticised the R&A and accused it of trying to "ruin his image" after his driver was ruled illegal after a random test ahead of The Open.

The 25-year-old was upset that after the clubhead of his Callaway driver was deemed to be illegal, his name was the only one to be made public by the R&A after the Open Championship's governing body tested 30 drivers to ensure they were within the legal limits.

"To make it fair they should test everybody," said Schauffele. "Other drivers failed. I'll just say it, I'm pretty sure a TaylorMade driver failed and the Callaway driver failed. This matter should be private. But R&A didn't do their job in keeping it private. It was just handled unprofessionally."

Schauffele was in 18th place on five under after the third round, but, after his rant, he struggled on Sunday and fired a seven-over 78 which dropped him into a tie for 41st place.

However, his plummet down the leaderboard was nothing compared to Holmes, who went from third place to joint-67th after going round in 16-over 87 - the highest final round at The Open since 1966.

Despite that horror show, the 37-year-old American was in the spotlight after his round due to his slow play which upset his playing partner Brooks Koepka.

Koepka was seen tapping his wrist in a gesture towards the official following their pairing as he and Holmes left the 12th green and he said afterwards: "If I'm in a group, we're going to be on pace no matter what. I'm usually ready to go, as soon as the guy's ball is coming down.

"I just always play, I'm ready to go most of the time. That's what I don't understand when it's your turn to hit, your glove is not on, then you start thinking about it, that's where the problem lies. It's not that he takes that long, he just doesn't do anything until his turn. That's the frustrating part, but he's not the only one that does it out here." 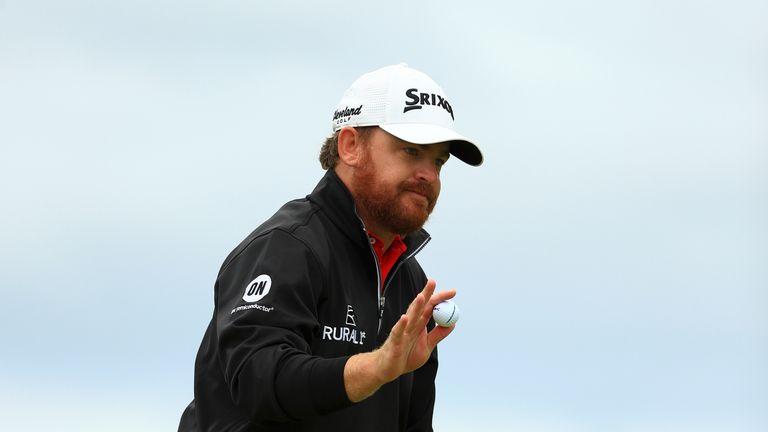