After over a decade of involvement in cycling, Sky is bringing to an end its partnership with Team Sky from the end of 2019.

Team Sky will continue to race under a different name if a new backer is secured to provide funding from the beginning of 2020.

The team will compete as Team Sky for the last time throughout the 2019 road racing season, aiming to add to its total of 322 all-time wins including eight Grand Tours, 52 other stage races and 25 one-day races.

Jeremy Darroch, Sky's Group chief executive, said: "We came into cycling with the aim of using elite success to inspire greater participation at all levels.

"After more than a decade of involvement, I couldn't be prouder of what we've achieved with Team Sky and our long-standing partners at British Cycling.

"But the end of 2019 is the right time for us to move on as we open a new chapter in Sky's story and turn our focus to different initiatives including our Sky Ocean Rescue campaign.

"I'd like to pay a special tribute to Dave Brailsford and the immensely talented team of riders and staff he has assembled at Team Sky.

"What they have achieved together would have been beyond the dreams of many just a few years ago.

"We thank you for joining with us on this journey and look forward to enjoying our last season of racing together."

Sky's decision to step back from cycling at the end of 2019 comes as the company begins a new phase in its development.

21st Century Fox, which owns a minority stake in Team Sky, has also confirmed 2019 will be the last year of its involvement in cycling.

While Sky and Fox will no longer be involved in cycling after next year, they and Team Sky's management will give careful consideration to approaches from third parties with an interest in working with one of the world's most successful sports teams.

Team Sky principal Sir Dave Brailsford said: "The vision for Team Sky began with the ambition to build a clean, winning team around a core of British riders and staff.

"The team's success has been the result of the talent, dedication and hard work of a remarkable group of people who have constantly challenged themselves to scale new heights of performance. None of this would have been possible without Sky. 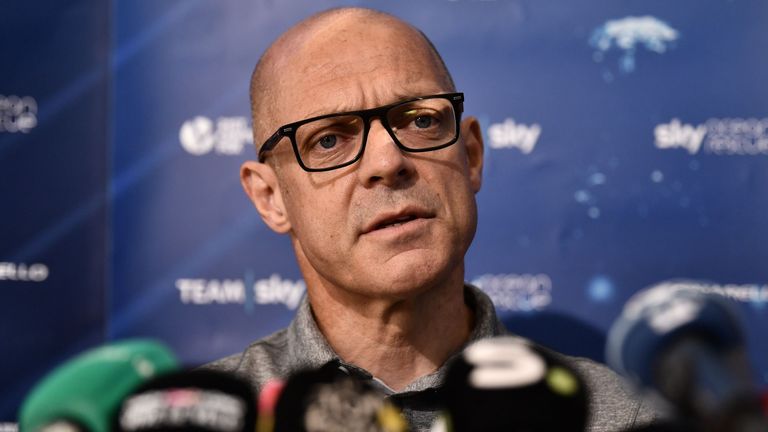 The team's success has been the result of the talent, dedication and hard work of a remarkable group of people who have constantly challenged themselves to scale new heights of performance. None of this would have been possible without Sky.

"We are proud of the part we have played in Britain's transformation into a cycling nation over the last decade.

"While Sky will be moving on at the end of next year, the Team is open minded about the future and the potential of working with a new partner, should the right opportunity present itself.

"For now, I would like to thank all Team Sky riders and staff, past and present - and above all the fans who have supported us on this adventure.

"We aren't finished yet by any means. There is another exciting year of racing ahead of us and we will be doing everything we can to deliver more Team Sky success in 2019."

In an open letter to fans, Team Sky said it hopes to clarify its future before the 2019 Tour de France begins on June 29.

"In terms of the future, we are open minded. If we can find a new long-term partner to take the team forward into a new era, then we will do so," the letter said.

"And we will be doing everything we can to make that happen over the coming weeks and months.

"Equally, any future partner would have to be the right partner - one who shares our ethos and buys in to our values.

"This news has only just been announced; we can't predict what will happen from 2020 and there are no guarantees.

"Whatever happens, we will make sure there is clarity one way or the other about the future of the team before the Tour de France next July."

Sky's commitment to cycling has been a core part of its Bigger Picture work, which focuses on the positive impact Sky can have in local communities and the wider world.

The company's most recent flagship campaign, Sky Ocean Rescue, is raising awareness about ocean health and encouraging businesses and the public to eliminate single-use plastic.

Previously, Sky has worked with a range of partners in long-term initiatives including Sky Sports Living for Sport, which promoted sports participation in schools over a period of 10 years, and Sky Rainforest Rescue, an environmental campaign with WWF that ran for six years.

The partnership, which includes a commitment to grow participation among children and at the grassroots, will form a central part of Sky's Bigger Picture activity in the coming years.