Abbie Eaton, who will compete in W Series in 2020, hopes to "help inspire others" after joining Racing Pride as a driver ambassador.

Well known in motorsport through her role as test driver on the TV show 'The Grand Tour', the 27-year-old was recently announced as a new recruit for the second season of the all-female W Series.

She has previously raced in the Production Touring Car Championship, the Mazda MX-5 Supercup (which she won in 2014), the British GT Championship, and the Blancpain Endurance Series.

Eaton said: "I'm delighted to be joining Racing Pride. I just go through my motorsport career openly being myself and it's fantastic if, by doing that, I can help to inspire others.

"Racing Pride is a positive movement about breaking down stereotypes and it creates an opportunity to show that the sport we love can be a welcoming environment for LGBTQ+ people like myself. I'm very happy to be playing my part in that." 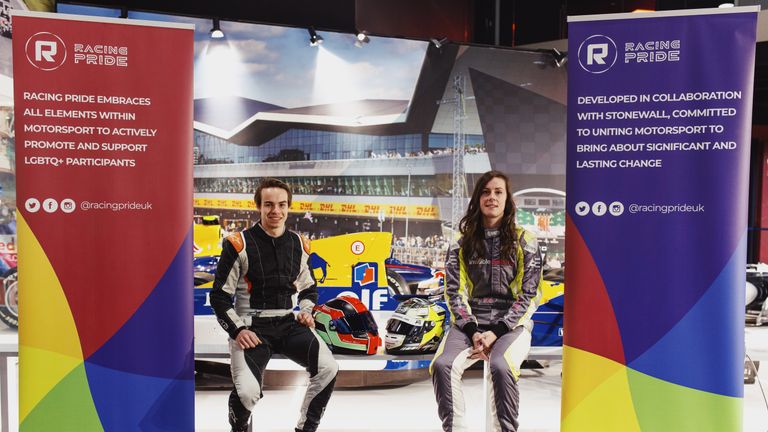 We're hugely excited to be welcoming Abbie to Racing Pride... she is an exceptional role model.

Racing Pride launched in June 2019, having been developed alongside the equality charity Stonewall. Prior to the movement being founded, there had been no concerted effort to raise visibility for LGBTQ+ participants within motorsport, whether they be drivers, mechanics, engineers, or those in race support, official, or associated media roles.

Through a network of ambassadors, commercial partners, and supporters from across the motorsport and automotive industries - drawing on allies as much as the LGBTQ+ community itself - Racing Pride is hoping to raise awareness of inclusion throughout the sport and beyond.

Morris says he is "hugely excited" to be welcoming Eaton to the group's stable of drivers.

"The programme of Driver Ambassadors is all about putting in place visible role models to inspire LGBTQ+ people both within motorsport and beyond, and we are confident that Abbie is an exceptional role model," he said.

"I look forward to working closely with Abbie, Charlie, Sarah and all of our Ambassadors to spread our values of acceptance and inclusion.

"Racing Pride's real strength is that it is about the collective - what we can achieve when we stand together and not simply as individuals.

"We hope that, as a collective movement, we can not only help to make our sport more inclusive, but give inspiration and support to LGBTQ+ people in society as a whole."

Racing Pride's co-founder, motorsport journalist Christopher Sharp, added: "It's an honour to have Abbie joining us as a Driver Ambassador.

"It's a reflection of how much and how quickly Racing Pride has grown since we launched just over five months ago in June. We're all working hard to build on the momentum we have gained as we head into the off-season and prepare for 2020."

The annual activation of Stonewall's Rainbow Laces campaign - which is supported by Sky Sports - begins on November 22, and runs through the first week of December.