Annual campaign activation under way; find out how you can get involved

At Sky Sports, everybody's welcome - and that's a message we're proud to share.

Inclusion is integral to Sky, and few activities bring people together quite like sport. Whether participating, watching the action live, or talking about the big event, we all deserve to get satisfaction, joy and entertainment out of the sports we love.

The message is echoed by Stonewall's Rainbow Laces campaign, which receives its annual activation from Friday, November 22, running into the first week of December. The campaign slogan is 'make sport everyone's game', with the focus on creating LGBT+-inclusive sports environments in which each individual truly feels part of the team.

Since 2016, Sky Sports has been part of TeamPride, a consortium of businesses and brands that supports Rainbow Laces. We work all year round with LGBT+ people and allies from elite to amateur level, learning about their experiences in sport and, in some cases, the challenges they continue to face.

Recent examples of our content from 2019 include the Olympic boxer Anthony Ogogo calling out homophobia; the stories shared during the ECB's summer Rainbow Laces activation by grassroots cricketers, such as Manish Modi and Sam Chambers; the exploits of Sophie Cook's Rainbow Rovers FC, who beat a team of ex-Premier League players on Brighton Pride weekend; and the Hull Roundheads, who are helping to champion inclusive rugby in East Yorkshire.

The power of inclusive sport

A year ago, memorable campaign moments included the colourful tifo produced by Watford fans at Vicarage Road, and Stonewall FC's special match night at Wembley under a rainbow arch. WWE's Sonya Deville spoke to us exclusively about her journey as an out wrestler, darts made its campaign debut, while in Scotland, boxer Kristen Fraser won a Commonwealth title with Rainbow Laces in her boots. 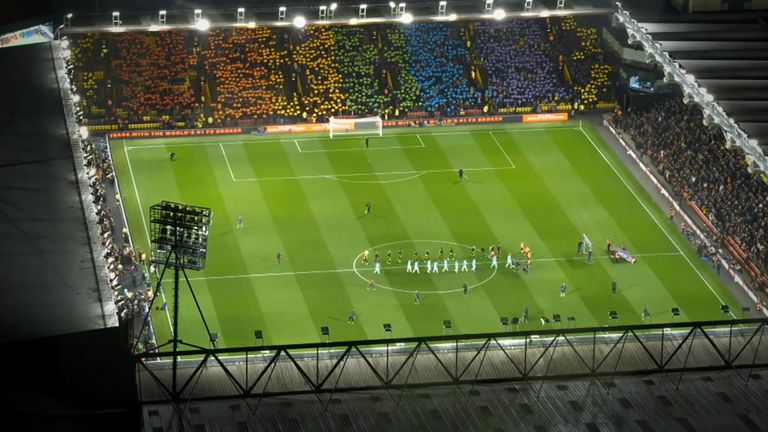 Callum Jewell, one of the co-founders of Watford's LGBT fans group Proud Hornets, explains the story behind the Vicarage Road rainbow tifo

If you'd like to contribute to our campaign coverage, now's a great time to get in touch. Maybe you want to thank the person at your sports club who goes the extra mile on LGBT+ inclusion; or you're interested in discussing your own experiences, in order to help empower others.

We also want to understand more about how instances of homophobia, biphobia and transphobia are having a negative impact in football and other sports, and the efforts being made to tackle that discrimination.

Be part of Rainbow Laces with Sky Sports - contact us here

In the coming weeks, the Premier League, EFL, Premiership Rugby and the British Olympic Association will again be among the governing bodies and organisations sharing the Rainbow Laces message.

There'll also be plenty of opportunities to show your support, whether you're LGBT+ yourself or an ally. This year, you can 'Come Out Active' by picking up a pair of laces and fundraising pack, getting them in your trainers or boots, and taking part in sport or physical activity. Why not invite your team-mates, work colleagues, and friends and family to join in? One of the key dates to look out for is Wednesday, November 27, when British sport will again mobilise for 'Rainbow Laces Day'.

Take pride and get involved!

The annual Rainbow Laces campaign activation begins on Friday, November 22, and runs through the first week of December.