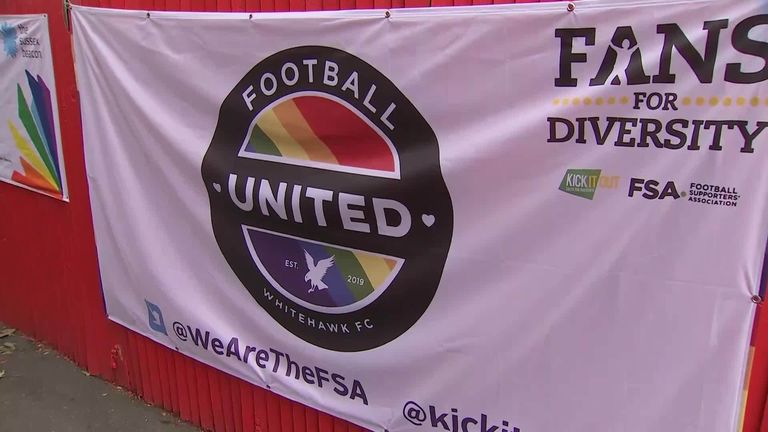 Campaigner Sophie Cook and the Fans For Diversity initiative's Anwar Uddin explain the concept behind 'Football United', the Whitehawk FC charity match between an ex-Premier League XI and a 'Rainbow Rovers' side of LGBT+ people and allies

The event, staged by Isthmian League South-East club Whitehawk FC at their TerraPura Ground home in East Brighton on the weekend of the city's famous Pride festival, saw the Rovers squad assembled by player-manager Sophie Cook run out 4-2 winners.

Walsh was on the scoresheet in the first half, but the highlight of the opening period was a 25-yard screamer from Uddin that flew into the top corner to draw the Rovers team level at 2-2.

After the break, Titans forward Josh Day completed a hat-trick to ensure the Rovers claimed victory in their first-ever match.

The match was supported by Kick It Out and the FSA through their joint Fans for Diversity initiative, and also the Football v Homophobia campaign, while a portion of the proceeds from ticket sales will be donated to the Brighton Rainbow Fund, the city and region's fundraising hub for LGBT+ communities and activities.

Watch the video at the top of this article to hear from Sophie Cook and Anwar Uddin on the message behind the 'Football United' match.

Sky Sports is a member of TeamPride and supports Stonewall's Rainbow Laces campaign.