The One That Got Away: Paula Radcliffe speaks candidly about Athens 2004 and the impact it had

Listen to every episode of The One That Got Away by subscribing at Spotify, Apple Podcasts, Spreaker. Watch athletes discussing their memories on the Sky Sports YouTube channel or On Demand

Paula Radcliffe speaks candidly about Athens 2004 and the impact it had on her, in the latest episode of the Sky Sports podcast series 'The One That Got Away'.

As a 10-year-old, Paula Radcliffe watched Joan Benoit win the inaugural women's Olympic marathon at the Los Angeles games. The next year, while supporting her father out on the streets of London, she watched Ingrid Kristiansen scorch past en route to a world record.

When Kristiansen flew by she thought 'one day, I would love to be able to run in this race, and run as well as she's doing'. Fast forward 17 years and Radcliffe was on the same course and pounding the tarmac, faster than any woman in history.

Radcliffe's ascent was a pretty meteoric one, going from 299th at the English Schools in 1986 to fourth 12 months later. She became the 1992 Junior World Champion over the cross in Boston and by the age of 20, was was making global senior finals.

The Bedford & County athlete's Olympic debut came in Atlanta 1996 - finishing fifth in the 5,000m. Four years on, she was agonisingly edged off the podim in the 10,000m in Sydney, fading to fourth after leading for much of the race.

It was a familiar sight - Radcliffe, the gutsy front-runner had gained a reputation for missing out on international silverware - and yet her true 'One That Got Away' did not come until her third Olympic games. It was to be in Athens where she endured the most heart-breaking defeat of them all.

In the build-up to Athens, Radcliffe was training better than ever before; the numbers even suggested that she was in superior shape to when she set her remarkable marathon world record in London the year before.

Her mark of 2:15.25 stood until November 2019, and is widely-regarded as one of the most formidable world records of the modern era.

Since her debut in 2002, she'd run three marathons, won every one and produced three of the fastest four times in history. There are favourites and then there was Radcliffe in her prime.

In Athens, every one of the 81 other women on the start line, knew that she was not only the fastest there, but the fastest there had ever been. However, what none of them knew was that Radcliffe had a nightmarish final few weeks of build-up.

An abscess deep in her knee had required syringing and an injection of cortisone, along with a heavy course of anti-inflammatories. As you would expect, that combined with the stress of the experience, contributed to poor sleep, an upset stomach, and Radcliffe's preparations coming unstuck on the eve of 'the biggest day of [her] running life.'

Would she have raced had it not been the Olympics - the most prestigious of all athletics events?

"Absolutely not," Radcliffe said on 'The One That Got Away' podcast. "There's always another big city marathon: there's not always another Olympic Games - particularly when you've finished fifth in 1996, and fourth in 2000." 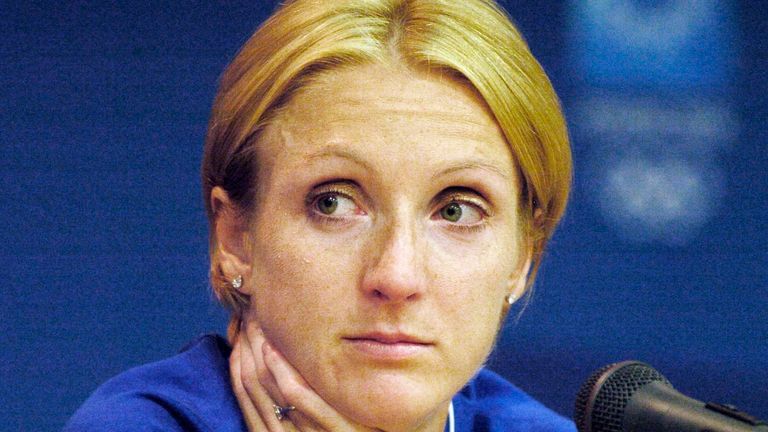 It felt like it was my race to lose that year. It also felt like I was carrying a whole lot of pressure, particularly from myself. I It was a dream I'd had since I was an 11-year-old child. Without a shadow of a doubt: I wouldn't have gone through that if it hadn't been the Olympic Games

It's hard to imagine what it must be like, after years of 150-mile weeks and meticulous preparation, and knowing that so many had already hung the gold medal around your neck, to also know that your ability to even complete the distance seemed far from certain.

"You can maybe wing it and kid yourself if you're the best in the world at some events, but the marathon isn't one of them. When you go in and you know that things are very far from perfect, it's very difficult.

"I didn't feel great from the start. I just remember feeling very, very cold - even though it was the hottest day. And then, when there was a bit of a breakaway towards the crest of the hill, I remember feeling like I was running out of energy.

"My mind was working - I was trying to respond and react in the right ways. I still thought I could get back into the race, even when I was dropping back, but I just wasn't able to do it.'

As an undefeated world-record holder over the distance, the experience was scary and had a profound impact on her.

"It had happened to me before lots of times in road races and on the track, but not in the marathon. Going through rough patches would happen to me frequently in training, but I was usually able to come through those. To begin with I thought that it's just the same as any other time in training but, what became concerning was that I wasn't coming through it; it was getting worse.

"The hardest part was when I realised that I couldn't hold a straight line. I found myself running in the gutter, without any control over where my legs were taking me. It almost starts to feel a little bit fluffy, a little bit woolly - like you're there but not really there.

"It was like those horrible dreams where you're trying to get to the finish and make your body move, but your body just won't move... This was actually in the race, and in the biggest race of my life.'

Radcliffe was visibly struggling, and then at the 36km mark, she did the unthinkable: she stopped. Distraught, she looked back down the road and tried to resume her race, but managed just a few strides before stopping once more.

Her sobs were audible over the sound of the spectators, and her heartbreak played out over the big screens of the Panathinaikos Stadium, where Union Jack-clad Team GB fans had flocked to watch her triumph - which had seemed so inevitable just a few hours ago. 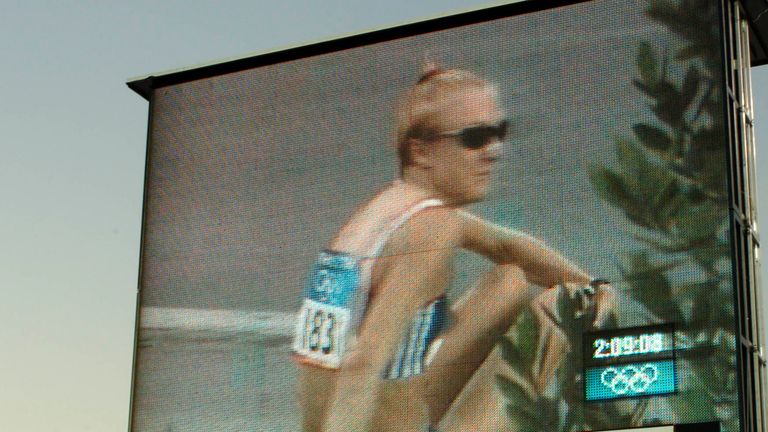 Radcliffe remembers very little from that point: collapsing onto a Greek curb, being comforted by some former Bedford & County teammates who had come to watch the race, and returning to the stadium in a van. She slumped onto the roadside out of sheer exhaustion, and didn't know what to expect next.

Given her profile, it was the next morning when a tearful Radcliffe, still very much in a state of shock, had to face the media. Perhaps the most abrupt turnaround, though, was her decision to contest the 10,000m final a few days later.

"I had to sit down with the Team GB sports psychologist, because the management would not let me race until I had spoken with him. He asked me what would happen if my leg hurt, if I couldn't finish or if I couldn't run well, on top of what had already happened in the marathon.

"I remember just turning to him and being very clear that the worst had already happened for me, and that the next worst thing would be having to sit in the stands and watch the race, and wonder what if?

"I have always been very good at is knowing myself - what I can cope with and what I can't cope with."

Radcliffe started the race but stepped off with eight laps remaining, knowing that she couldn't be competitive, and that "some kind of pity race" wasn't worth sustaining further damage. Her 2004 Olympics were over.

The closure provided by that 10,000m allowed her to rest, recover and get checked out medically, before returning to running when she was ready.

The sport has always been part of her healing process; when she experiences tough times, she goes running. In the aftermath of that Olympics, a last-minute request for a place in the New York Marathon, and a gritty performance there, laid to rest some of the ghosts of Athens and silenced many of her critics. The win commenced another period of distance dominance, including a third London title and World Championship gold in Helsinki the following summer.

As hard as it is to believe, 2000 was to be Radcliffe's most successful Olympics. A stress fracture in her femur derailed her Beijing 2008 bid, and she was forced to withdraw before race day in London 2012 with the foot injury which would ultimately bring her career to a close.

Radcliffe retired with an MBE, a magnificent world record, World, European and Commonwealth medals to go alongside a series of big city marathon titles. So surely an Olympic title, is the one that got away for her...

"Oh yes - without a doubt. But my mindset, as an athlete and as a person, is that you set those goals, you give it the best shot that you can. Sometimes you're going got achieve more than you thought you were capable of, and sometimes you won't achieve them, but unless you try you really won't know."

Listen to every episode of The One That Got Away by subscribing at Spotify | Apple Podcasts | Spreaker. Watch athletes discussing their memories on the Sky Sports YouTube channel or On Demand.