The defenders and their challenger won a race apiece on the opening day of the 36th America's Cup Match. Racing continues on Friday, and every race day will be live on Sky Sports from 3am. 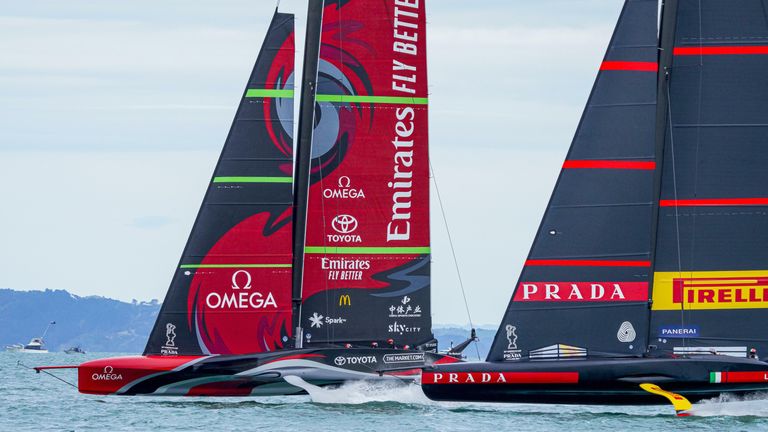 Emirates Team New Zealand and Luna Rossa Prada Pirelli split the first two races on the first day of the 36th America's Cup Match, with New Zealand helmsman Peter Burling admitting that the defenders were "chipping off a bit of rust".

As racing finally got under way after the opening day had been pushed back due to Auckland's recent COVID-19 lockdown, Emirates Team New Zealand claimed the first race in the first-to-seven-points contest by 31 seconds.

But Luna Rossa Prada Pirelli hit back in the second race, crossing the start line first and then holding off the defenders to win by seven seconds.

After Thursday's rest day, both teams return to the water on Friday to compete on successive days until one winner is decided.

New Zealand start in style before Luna Rossa hit back

The defenders, who have been working on their race boat and training in the background while Luna Rossa Prada Pirelli saw off Sir Ben Ainslie's Team INEOS TEAM UK in the PRADA Challenger Selection Series, showed their speed in the opening encounter.

As has been the case in a number of races, the pre-start proved to be decisive. Both teams didn't shy away from one another, and it was the defenders who emerged with the advantage as they crossed the start line.

From there, the defenders kept their lead throughout the race, with the margin ebbing and flowing, and Luna Rossa were unable to reel them back in.

However, in the second race, Francesco Bruni and Jimmy Spithill took hold of the pre-start and commenced the contest on their terms. After such a positive opening, Luna Rossa Prada Pirelli remained focused and extended their lead.

After holding a 430m advantage at one point, the Kiwis pounced and started to eat up the metres.

As the race came into its latter stages, the defenders continued to press hard and pull back seconds. Had the race continued on for longer, then it might have been a different result, but the line came gladly into view for the Italians and they finished seven seconds ahead. Lessons to take for defenders

"We've got a lot to go back and learn," Burling said after racing had concluded.

"It's obviously the first time that we've raced in three months so we're definitely chipping off a little bit of rust, but we're pleased with how we checked in.

"It's incredible to see how many Kiwis are getting behind this event," he added.

"It means a lot of us to be the home team here, to be putting on this event and welcoming other teams down. It was pretty incredible going out onto the racecourse.

"We probably learned what we already knew [about Luna Rossa], that we'd have a really good challenge from them and that they'd improved a lot from the World Series.

"After today, we also know what we need to do in order to keep on winning races. That's about sailing well, and we definitely didn't feel like we put our best foot forwards in that second race.

"On that last lap, we started to string together a few shifts and sail the boat a bit better, then the margin game down pretty quickly.

"We're really happy with how we're going, but there's plenty of hard work to do over the next, number of races to get the job done." 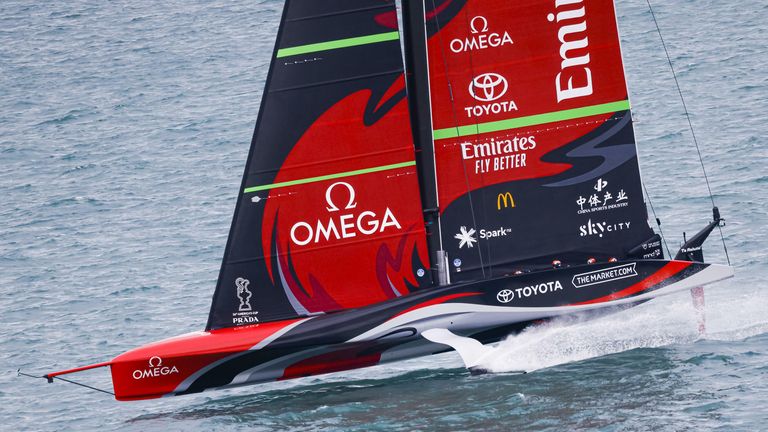 Any mistake and you're not going to win the yacht race. It's about trying to put your best foot forwards, and doing all of the little things well. We're really happy with the boat that we've got in the shed there. We know that it can do, what we need it to do.

After losing the opening race of the Match, Spithill praised Luna Rossa Prada Pirelli's ability to bounce back.

Following their successful PRADA Challenger Selection Series, and a longer than anticipated wait to start the Match, they showed their resilience to not let the inital setback derail them.

"Something we've worked pretty hard within Luna Rossa is the element of composure," Spithill said.

"The ability for the team to purely focus on the next race, was a huge step forwards for us and very satisfying."

Luna Rossa Prada Pirelli emerged out of the PRADA Cup having enjoyed an upward trajectory throughout, but they still didn't know quite how they were going to match-up against the defender.

As a result, one of their aims for the opening day was to assess where both teams were at, and Spithill was positive about what he saw on the water.

"The assessment is that you've got to look at the scoreline, and the scoreline suggests that both teams can win races - which is a great thing," he concluded.

"It's confidence for our guys, I think that we've taken a good step since the Christmas period when we last raced them, but we need more. You've got to constantly develop in the America's Cup, it doesn't just stop now.

"The way that we spend tomorrow [Thursday's day off] will be fundamental for the rest of the series, because unless we get a weather delay, it's the only day where we really get our hands on the boat."

For Spithill, Burling and every member of their respective teams, it's clear that a critical day awaits them before the America's Cup Match puts its foot to the floor and one team will go on and win the oldest trophy in world sport.

Watch every moment of the America's Cup challenge, live on Sky Sports. Coverage continues with the second race day of the 36th America's Cup Match on Friday from 3am.