Ronda Rousey on life in WWE: 'I haven't been this happy since my wedding day'

Destiny is an overused word in any sport but it seems entirely appropriate when describing Ronda Rousey's road to WWE.

For years, the company coveted her signature. Her achievements in Olympic judo, and then in UFC, had an enormous impact on the sporting landscape and firmly installed her as a major role model not just for women in athletics - but for women full stop.

Her status as a pioneer, combined with elite-level athleticism, a unique look and vast star power, made her a hugely attractive proposition for WWE. Earlier this year, they finally got their woman.

And yet this is a very different Rousey to the one everyone knows from UFC. Her ultra-serious and cold demeanour, seemingly stripped of any human emotion, has been replaced with an outward personality which is nothing but joyful.

Rousey is enjoying her time in WWE - brief as it has been so far - and her enthusiasm for this latest chapter in her career is almost impossible to contain.

She spends the opening exchanges of the interview either laughing or talking excitedly. When she is thanked for her time she says, between giggles, "nobody is more important than you right now".

She is unequivocally happy to be in WWE and it feels like this is a role she has been destined to have.

"I was a huge wrestling fan and I remember how they made me feel," she said. "I was a little kid in the mid-west who could barely talk, I could barely say Hulk Hogan but I had a Hulk Hogan wrestling buddy and I would rip that thing's arm off over and over again.

The seed was duly sown but it was not until much later in life that Rousey's enthusiasm for WWE would once again surface. 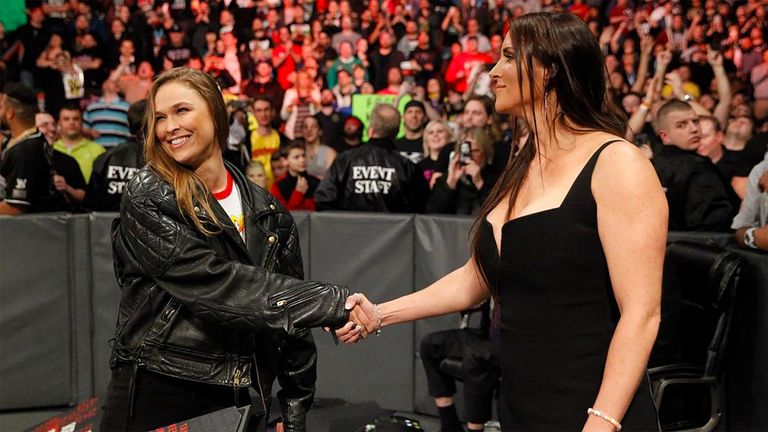 "My body is aching all over and I'm mentally exhausted from everything I'm learning but I can't remember the last time I was as happy as this."

She is in no doubt of the importance her friend Shayna Baszler - currently tapping people out on NXT - played in convincing her that WWE was a good option, not through a hard sell, but in the way it was providing her with a very visible sense of satisfaction.

"It wasn't until I was fighting in the UFC and Shayna [Baszler] and Jessamyn [Duke] moved in with me and they always put WWE on the TV, it seemed like every single night," she said.

"We would fight all day in the gym and when we came home we didn't want to talk about fighting, we wanted to escape through wrestling.

"It was our sanctuary from the stress of the fighting world and it slowly became more and more where we wanted to be.

"Shayna was the first one of us to take that leap and she's always been an example to me. She did women's MMA before me and opened a lot of doors for all of us.

"If it wasn't for her making a point of us sitting down and watching wrestling together then I wouldn't be here either.

"When she made that jump from fighting from wrestling I saw how much happier that made her and how more applied she was. It was hard not to want to be part of that."

The transition for Rousey has been both straightforward and difficult.

Much of what she has had to learn at WWE's state-of-the-art Performance Center in Orlando has been in line with her previous training, but a huge amount of it is brand new.

That freshness has both sharpened Rousey's focus and provided her with a new hunger for doing something she truly loves - becoming an expert in a previously foreign field.

"It's almost a combination of everything that I've done and something entirely different and unique," she said.

"And there are so many things that are completely unique to the business; I still have such a vast amount to learn and it's really rejuvenated me.

"To master something new is one of my greatest pleasures in life, rather than just sitting there doing something you already know how to do.

"I want to be mentally pushed and challenged every day and it's hard to not be in this world and not be totally obsessed and engrossing by it.

"My body is aching all over and I'm mentally exhausted from everything I'm learning but I can't remember the last time I was as happy as this, maybe my wedding day."