By Lee Harvey and Mike Tuck 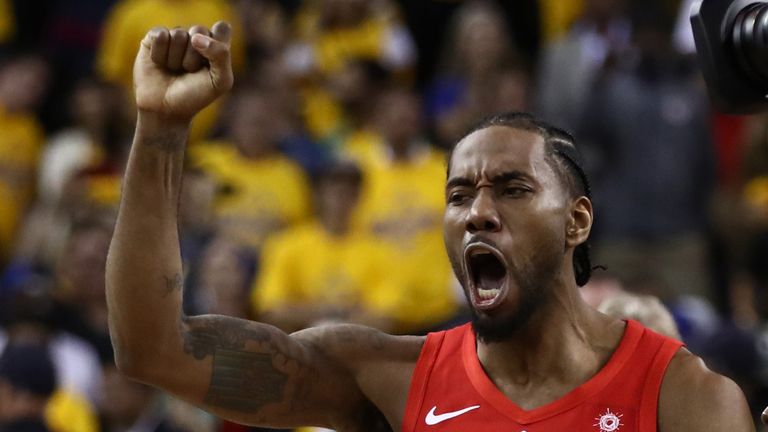 Kawhi Leonard was named Finals MVP after leading the Toronto Raptors to their maiden NBA championship, a fitting reward for a postseason in which he cemented his place among playoff greats.

Dynasty destroyer? Stoic superstar? Buzzer-beating behemoth? Taciturn talisman? In the 2019 NBA playoffs, Kawhi Leonard showed he was all these things and more as he powered the Toronto Raptors to their first NBA title.

Acquired by the Raptors in a summer trade with the San Antonio Spurs with much to prove coming off a quad injury that limited him to just nine appearances in the 2017/18 season, Leonard's superb two-month postseason campaign erased what little doubt existed about his health and talent. 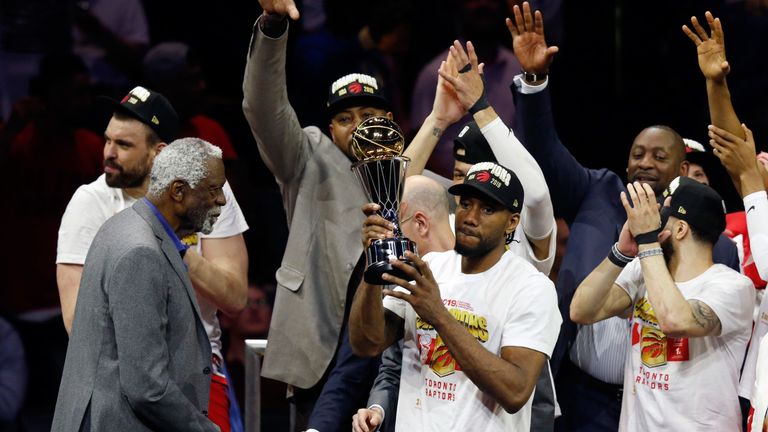 Kawhi Leonard was crowned the 2019 NBA Finals Most Valuable Player

It also secures his place in the pantheon of NBA playoff performers alongside luminaries like Michael Jordan, LeBron James, Kobe Bryant, and Kareem Abdul-Jabbar.

Known as the 'King of the North' to Toronto fans, Leonard's postseason play has felt like a coronation, featuring game-winning shots, lockdown defense, and otherworldly statistics.

He scored a combined 100 points in Games 2, 3, and 4 of the Finals series, a feat only previously achieved by LeBron James (2016 Finals) who had then-Cavaliers team-mate Kyrie Irving on hand as a twin scoring threat.

In the Raptors' 105-92 win over the Warriors in Game 4 of the Finals, Leonard scored 36 points and committed no turnovers. Only Jordan has scored 35+ points with no turnovers in a Finals game previously. Leonard topped 30 points in 14 games in this postseason. Only James and Kobe Bryant have done that in the last 10 years.

Leonard ends the playoffs as the leader in total points scored and total steals. Had Golden State's Draymond Green not grabbed 19 rebounds in the Warriors' season-ending Game 6 loss, Leonard would have led that category too.

He more than earned his second Finals Most Valuable Player award and joins Kareem Abdul-Jabbar as the only players in NBA history to win Finals MVP in both conferences.

Oh, and thanks to the recently-launched Ka-Wine and Dine scheme, he can eat and drink for free all over Toronto.

Leonard has made huge plays at crucial moments, too. No one will forget his four-bounce fadeaway in the Eastern Conference semi-finals, a series-clinching Game 7 buzzer-beater that eliminated the Philadelphia 76ers. But don't forget the clutch triple he hit over 76ers center Joel Embiid in Game 4 of that series. Without it, Toronto would have faced a 3-1 deficit and almost certain elimination.

Leonard's dominance at both ends of the floor was most evident in the Eastern Conference Finals against the Milwaukee Bucks. Trailing 2-0 in the series, Raptors coach Nick Nurse deployed Leonard as the primary defender on Giannis Antetokounmpo, a move that turned the series around. The Raptors reeled off four straight wins to reach the Finals for the first time. Leonard's ruthlessness was never more visible in Game 4 of the Finals at Oracle Arena. The Warriors are famous for turning games on their head with their famous third-quarter runs. Leonard hit back-to-back three-pointers to open the second half, ensuring there was no trademark Golden State revival.

Sky Sports NBA analyst Mike Tuck, a British Basketball League star and a Canadian-born lifelong Raptors fan, is in no doubt about the brilliance of Leonard's postseason performances.

"When your numbers mean you are being mentioned in the same breath as Michael Jordan, that's greatness right there.

"A lot of people have compared Leonard to Jordan because of the two-way contributions and the overall load he has carried throughout the playoffs. Any time you can average over 30 points - as he has at times in these playoffs - in a postseason series is absolutely ridiculous. "I love how level-headed he is. He stays in the moment every time, nothing gets to him. The only time we've seen any emotion from him came after he hit that series-clinching buzzer-beater in Game 7 against the Philadelphia 76ers.

"He always seems to make the right play, the right shot. He is extremely balanced the way he plays and is extremely strong, bigger guys just bounce off him. 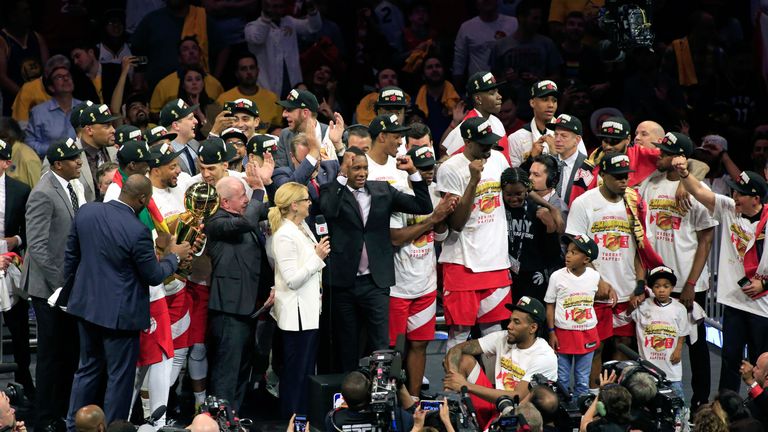 "I think he is becoming a better passer too. As the Finals have gone on, he has become a better playmaker. He is being double-teamed almost every time down the floor so he has had to become better at making the right pass.

"That has made the Raptors a tougher team to deal with as a result because they are playing as a unit now. Early on in this postseason, there was a 'deer in the headlights' feel to some of the Raptors play, watching Kawhi do stuff then reacting. Now they are more cohesive. "All this, despite the fact he has been playing while being hindered by a leg injury. No one has really talked about it (primarily because Kawhi himself hasn't talked about it) but he has been hobbling on the court a little bit. Hats off to him. I hope he stays in Toronto!

"I still think Kawhi will favour coming back to Toronto. The city and country have embraced him and, although his heart is still in California, I think the Raptors will bring him back. Even if he does go, he'll always be a legend in Canada."