Coverage of the NBA continues on Saturday night as the Utah Jazz visit the Los Angeles Lakers, live on Sky Sports Mix and Arena from 9.30pm

Donovan Mitchell scored 22 points before leaving with a sprained right ankle early in the third quarter, and the Utah Jazz rallied in his absence to beat the visiting Indiana Pacers 119-111 in Salt Lake City with new part-owner Dwyane Wade in attendance. 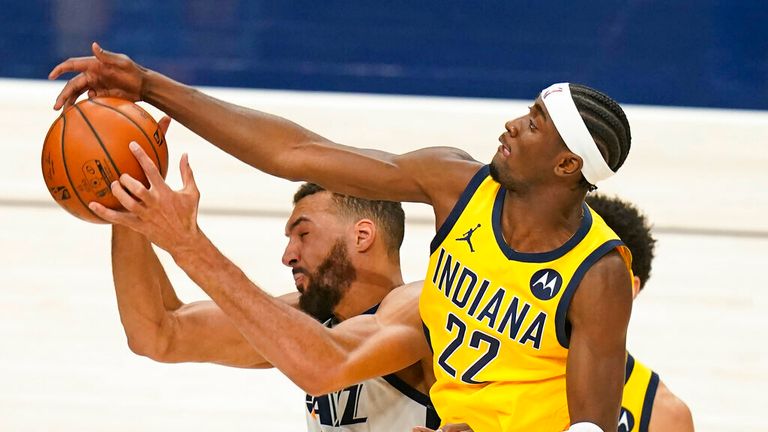 Bojan Bogdanovic led the Jazz in scoring with 24 points, and Jordan Clarkson returned from his four-game injury absence to help the comeback efforts with 18 points.

Caris LeVert led Indiana with 24 points and Domantas Sabonis added 22 points, 15 rebounds and seven assists, but the Pacers only scored 42 points in the second half en route to their second loss in three games.

Utah won this one despite Mitchell leaving the game less than four minutes into the third quarter after he landed awkwardly on his right foot after jumping in an effort to steal a pass. The two-time All-Star walked slowly to the training room with the help of teammates on each side.

The Jazz announced that Mitchell will undergo an MRI exam to determine the severity of the injury. 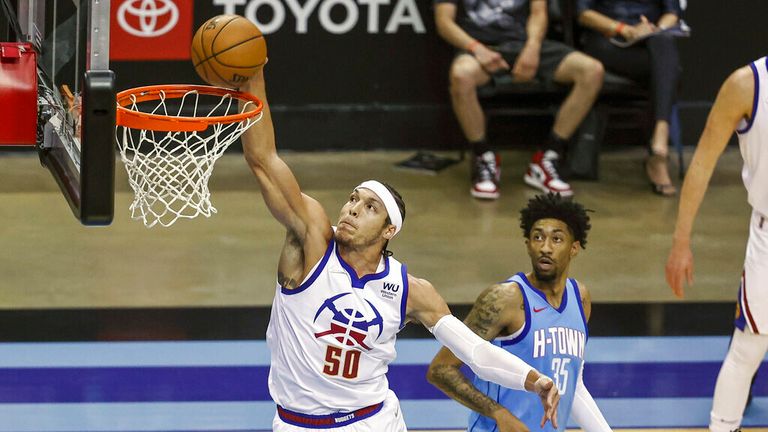 Highlights of the Denver Nuggets against the Houston Rockets

Nikola Jokic posted his 50th double-double of the season while Michael Porter Jr. scored 21 points as the Denver Nuggets rolled to a 128-99 road win over the Houston Rockets.

Jokic finished with 29 points and 16 rebounds while adding seven assists and two steals to pace the Nuggets, victorious in both of their games since guard Jamal Murray was lost to a season-ending left ACL injury. Jokic finished 10-for-12 from the floor to pace a Denver offense that shot 48.9 percent overall. 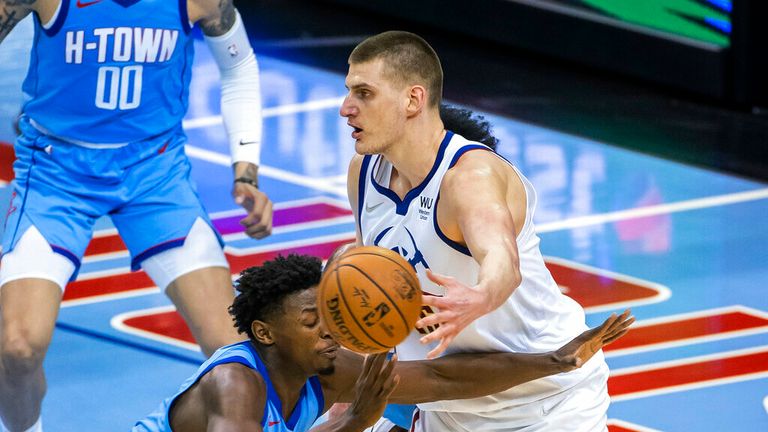 Check out this incredible over-the-head assist from Nikola Jokic

Porter chipped in 4-for-7 3-point shooting plus five rebounds and was critical to the Nuggets' fast start. He drained two treys during a 14-2 run that gave Denver its first double-digit lead at 18-7 early in the first quarter. The final margin represented the largest lead for the Nuggets.

Millsap finished with 11 points and 10 boards as three Nuggets reserves scored in double figures, including JaMychal Green with 13 and PJ Dozier with 11. Will Barton added 12 for the Nuggets.

Olynyk led the Rockets with 23 points while Tate added 21 on 9-of-13 shooting. 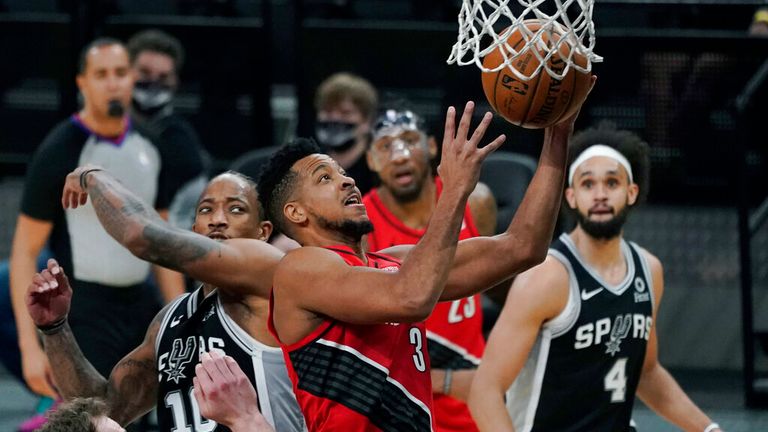 Highlights of the Portland Trail Blazers against the San Antonio Spurs

Norman Powell hit the game-winning shot with 22.8 seconds remaining as the short-handed Portland Trail Blazers came from behind to beat the host San Antonio Spurs 107-106 on Friday.

CJ McCollum scored 29 points while Powell added 22 for Portland, which had lost four of its previous five games. Portland star Damian Lillard sat out Friday due to a right hamstring injury.

DeRozan led the Spurs with 26 points and added 10 assists. Poeltl had 17 points, Drew Eubanks scored 15 points, Dejounte Murray had 13 points, 11 rebounds and 10 assists (his third triple-double of the season) and Derrick White tallied 13 points for San Antonio, which has lost two straight games. 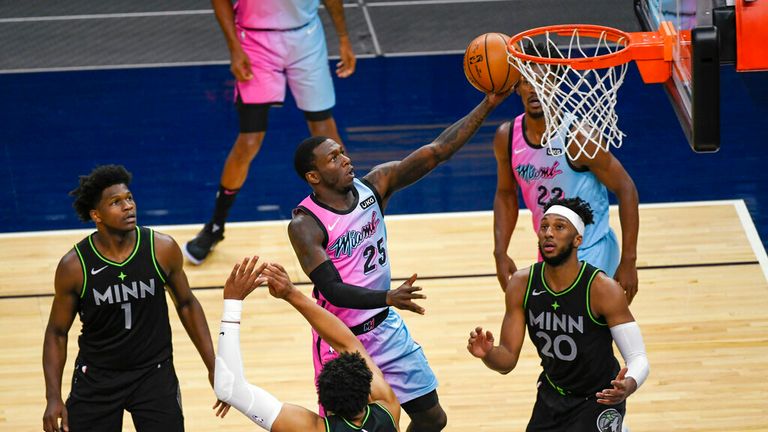 Highlights of the Miami Heat against the Minnesota Timberwolves

After losing its past two home games by a combined 55 points, the host Minnesota Timberwolves used a big fourth quarter to upset the Miami Heat 119-111 at the Target Center in Minneapolis.

The Heat, which came into the night fighting for a playoff spot at seventh in the Eastern Conference standings, ended its four-game road trip with a third consecutive loss.

Minnesota has beaten Miami in its past five meetings and in six of the previous seven.

Towns had missed the previous two home losses to Brooklyn and Milwaukee due to personal reasons. He had 24 points and five rebounds - and hit all four attempts from long distance against the Heat.

Aside from Towns, the Timberwolves were paced by Ricky Rubio's 17 points and 16 from Naz Reid. Four other Timberwolves scored in double figures, including Juancho Hernangomez (14), Anthony Edwards (12), D'Angelo Russell (11) and Josh Okogie (10).

Miami was led by Butler, who came close to recording a triple-double with 30 points, 10 rebounds and eight assists. Trevor Ariza (21 points) and Bam Adebayo (17) also led the Heat. Dragic added 15 off the bench and Duncan Robinson scored 11. 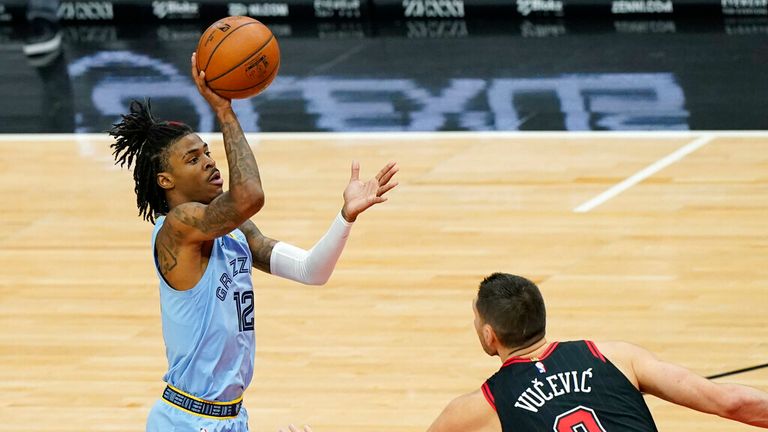 Highlights of the Memphis Grizzlies against the Chicago Bulls

Memphis rode a 37-point third quarter into the final period, when runs of 9-0 and 7-0 helped the Grizzlies build a 20-point advantage.

Jonas Valanciunas' franchise-record double-double streak ended at 16 games with his collecting seven rebounds, but he shot 7-of-9 from the floor for 16 points.

Coby White led the Bulls with 27 points in the loss. He shot 4-for-8 from 3-point range. Nikola Vucevic went 3-for-7 from beyond the arc and recorded 24 points with a game-high 14 rebounds.