P.J. Tucker on Kevin Durant as Milwaukee Bucks star opens up on challenge of guarding 'best scorer he's ever seen'

Coverage of the NBA playoffs continues on Saturday night as the Brooklyn Nets and Milwaukee Bucks meet for Game 7 in New York, with the winner advancing to the Eastern Conference Finals. Join us live from 1:30am on Sky Sports Mix and Sky Sports Arena

P.J. Tucker latches onto Kevin Durant every time both men step onto the hardwood together.

The veteran wing defender makes it his personal mission to try and stop the man that he considers to be the best scorer he's ever seen on a basketball court.

And the key word is 'try'. And that is what he will be tasked with doing again on Saturday night as the Milwaukee Bucks and Brooklyn Nets face off in a series decider, which you can watch live on Sky Sports Mix and Sky Sports Arena from 1.30am.

Durant was out of this world in the absence of fellow Brooklyn Nets stars Kyrie Irving and James Harden in Game 5 of this fascinating Eastern Conference semi-finals series, scoring 49 points, grabbing 17 rebounds and dishing out 10 assists.

Tucker accepts that sometimes there is just nothing you can do to stop KD. And after the Milwaukee Bucks star put in a typically tireless, pest-like shift in the Bucks' 104-89 win which levelled the series and forced a decider on Thursday night, he spoke at fascinating length of what it's like facing up to Durant on the court.

"Listen, Kevin is maybe the best scorer of our generation, like he's out there," Tucker said. "He averages 30 in the playoffs for his career (29.4, to be exact), he's gonna score the ball a lot. Everybody knows that. I don't know why people act like it's a surprise. He is a tall task for anybody.

"I don't think anybody could shut him down. But what you can do is just try to make him work. You know, people call out - maybe this guy or maybe that guy... it doesn't matter. He's always got an advantage. He's always going to go at your team and it takes a whole team to guard him.

"The thing is (to make sure you're) taking away from everybody else. If you're guarding him, you focus on him. If you can guard everybody else and make them make plays, make them beat you, (then) I think that's the key because he's going to score. You just try and make it as tough as possible, to make him take as many shots as possible to get to that number." 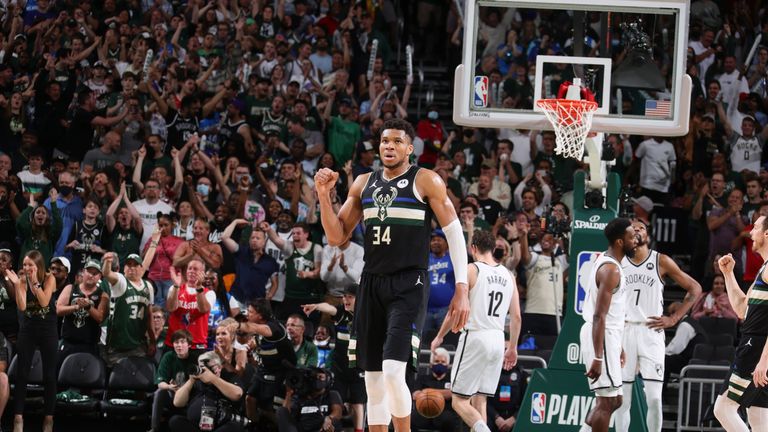 Durant still posted a double-double of 32 points and 11 rebounds in Thursday's defeat but the Bucks' tactics have been much more effective at nullifying the Nets – who, granted, have been without James Harden and, latterly, Kyrie Irving due to injuries – since they were blown out in Game 1 and Game 2.

Tucker, who posted a team-high plus-minus of plus 30 in his team's victory in Game 6, feels that his teammates allowing him to focus on Durant and not "overhelping" when guarding him, has been a big factor in the Bucks' turnaround.

"Overhelping and doing really small things that people who don't know basketball would never understand (hurt us). (A) very small set of things that cost big time in the end.

"What we can't do is get frustrated with him scoring and people start trying to help. (Then) everybody else starts scoring and that's when it gets ugly, and that's when Game 1 and Game 2 happens. So my job is to keep them in front, fight as much as I can and make sure that nobody else has to help. So they can stay home on their man. That's my job.

"We kind of collaborated with the coaches (after Game 1 and Game 2) and figured out something that we both liked, that we thought we could (execute) game plan wise. I feel like Game 3 or 4, we were pretty good, came through it great. Game 5, we played great for a half. Obviously, switching players midway and doing some different things and giving up a tonne of points. I think throughout the series, each game has been a little different, but I feel like we've got better every game."

Intensity ratchets up to the max during the playoffs and Durant and Tucker are two of the mouthier players in the league, so it comes as no surprise that sometimes it spills over into a full-blown verbal altercation.

But Tucker insists that's just part and parcel of the game and that he wouldn't have it any other way.

"It's the playoffs man, I don't know what people think. We dreamed about this our whole lives, like I dream of being in playoffs guarding the best player in the world. I would die out there, I'm living my dream. I'm not backing down from (anything). I'm fighting for every inch.

"Me and Kevin fight every year. I've got him every year in the playoffs. Golden State, Oklahoma City, it doesn't matter - regular season, playoffs… I love guarding him, I enjoy it. He's the best scorer I've ever seen in my life. I told Rick Barnes on his visit when (Durant) was a junior in high school, 'He's gonna be the best player I've ever seen in my life. He killed us'. I knew this. This was 11th grade.

"I exert so much energy covering him, right, people would never understand how hard it is. I mean, literally every single play, you have to be on your game because he can score every single play. So it's tough. So I do everything I can.

"That's my brother. We compete, we fight, every game. We're gonna fight again in Game 7. That is a part of it."

It will be box office viewing, that is certain. And you can watch Game 7 live on Sky Sports Arena, on Saturday night from 1.30am.