There's yet more NBA action to tuck into as every game in the Eastern and Western Conference Finals, as well as the NBA Finals, will be shown live on Sky Sports

Steph Curry, Klay Thompson and Draymond Green are cherishing this year's playoff run with the Golden State Warriors after spending the past two years sitting out of the postseason.

The Warriors, who booked their spot in the Western Conference Finals with a 4-2 series win over the Memphis Grizzlies, went to five-straight NBA Finals between 2015 and 2019, winning three of them, but have missed out on the playoffs altogether in 2020 and 2021 amid a raft of injuries.

"It's unbelievable knowing what we've been through these last two years, and six of the last eight we have an opportunity to play for the finals," Curry said after Golden State's series-clinching 110-96 win over Memphis on Friday night. 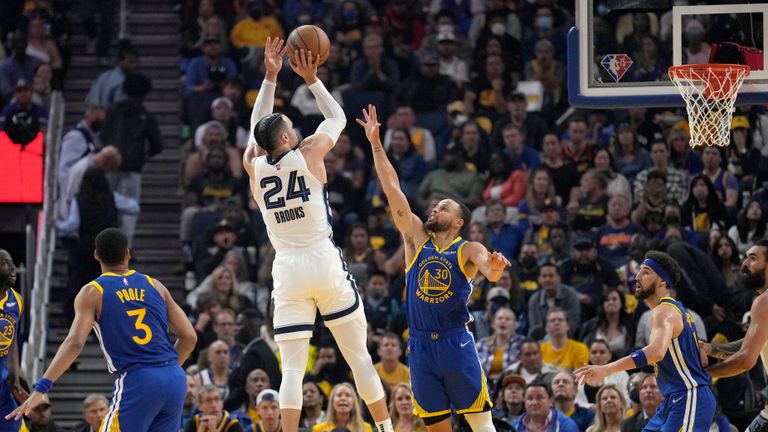 Highlights of the Memphis Grizzlies against the Golden State Warriors in Game 6 of the Western Conference semi-finals.

"I think me, Draymond, Klay, Loon [Kevon Looney] we've been in this position before. We understand the emotions, the adrenaline, how much you want it, how hard it is.

"Never take it for granted and understand this is what it's all about, and then for us to have another opportunity to get four more wins and play for a trophy, that's special."

For Thompson, it particular, it means so much after he returned from injury only in January following more than two and a half years spent recovering from surgeries on his left knee and right Achilles tendon.

Thompson scored 30 points on Friday night, with eight 3-pointers in adding another Game 6 masterpiece to his long list of them.

"I love the moments. I love the pressure," Thompson said. "I love playing basketball at the highest level."

The Warriors will next face the No 1 seeded Phoenix Suns or the Dallas Mavericks in a best-of-seven battle for the West. The decisive Game 7 of that series is on Sunday in Phoenix.

Green, who was joined on the post-game podium with son DJ, shared a story of watching the playoffs from Cabo San Lucas at this time last year. "It feels good to be back," he said.

"I used to take it for granted and just think that that's the way it's supposed to be, we're supposed to make the Western Conference Finals.

"And to miss the playoffs the last two years, I remember sitting in Cabo last year watching the playoffs and don't get me wrong, I love Cabo, but it was brutal watching."

The rush of live NBA Playoffs games continues on Sky Sports this weekend - see the list of games here and subscribe to watch the live action.