As part of a new series of articles produced exclusively for Sky Sports by NBA superfans from across the UK and Ireland, we look at the state of play for every franchise with preseason set to get under way at the end of this week

Heat superfan Dan Healy assesses the 2021-22 season for his team, and then casts an eye ahead to the 2022-23 campaign for Miami.

Where my love for the NBA and the Heat came from...

My name is Dan Healy, I'm a Miami Heat fanatic from Essex and the founder of the @TheMiamiHeatUK .

I've always been a massive sports fan here in the UK but for a long time, I had never taken interest in any of the sports from across the pond. That was until the eve of the 2016-17 NBA season when my younger brother messaged me to say he had loosely followed the sport the season before and as it was about to start up again, he suggested we both give it a bash. I thought okay, basketball… a fast-paced sport, easy to understand the fundamentals, let's give this a whirl!

So I asked him who he was going to follow, he answered that as he was a regular visitor to Orlando, he'd root for the Magic. So, purely to create some in-state rivalry, I opted to pick Orlando's southern neighbours the Miami Heat!

Fast forward to today and we now have a prominent social media presence since creating the Twitter account in 2019. It has grown into a platform for Heat fans everywhere to interact and discuss all aspects of the club and we now have over a dozen contributors to help produce content both in media and written format. We have been taken under the wing of all the leading content producers in South Florida and have even gained the following of the official Miami Heat account!

We also have a podcast called HEATing Up The UK which is hosted by myself and has included some prominent guests from inside the organisation as well as other influential media members. The hard work peaked when I was lucky enough to get to fly to Miami in March this year to watch the team and the Miami Heat brought me down onto court to watch the players warm up and even gave me a personalised 'UK DAN' Heat jersey. A memory that will live with me for eternity.

This is quite an easy one. Jimmy Butler and Bam Adebayo. When Jimmy came to the Heat it was branded by many as a retirement move and he was labelled a locker room disrupter. In Year 1, with only Bam, Goran Dragic and a bunch of rookies and undrafted exiles he led them to Game 6 of the NBA Finals. His leadership role along with the demanding aspects of the gruelling 'Heat Culture' was a match made in heaven.

His ethos was simple: it's not just about hard work. You bring it all every day, to every game, to every practise, to every workout and we'll get on fine. Winning is all he is here to do. Doesn't matter if you're a max contract player or a rookie, that's the formula he's here to instil and that won the hearts of every player, fan, coach and executive across the franchise. Bam Adebayo showed off his full repertoire for the Miami Heat with 31 points, 10 rebounds, six assists and four steals as they beat the Boston Celtics in Game 3 of the Eastern Conference Finals

Bam Adebayo is the man we say has 'no ceiling'. He is unique. A defensive juggernaut who can guard one through five, has the mobility of a highly skilled guard, he can facilitate, he can stay in front of any player and has developed an ever-improving shot. He is far from the finished article at just 25 years of age and with a bit more work on his offensive skillset and a willingness to be a bit more aggressive in post-up situations, the sky is the limit for Bam.

Grade for last season: A

2021/22 was a success for Miami. We had a good offseason last year adding three NBA champions in PJ Tucker, Markeiff Morris and Kyle Lowry. Adding these three players gave us a veteran presence to help aid the development of some of our young talent alongside a dogged mentality that would align perfectly with our culture.

Kyle Lowry was viewed by many including myself as a perfect fit in the Heat puzzle to help facilitate and orchestrate our attack as well as adding another defensively-equipped asset and at last, gave us a true point guard. PJ Tucker was another magnificent capture from reigning champions Milwaukee Bucks and was highly productive all season long even at the age of 37.

The highlight of the season in my opinion however came from the unexpected development of Gabe Vincent and Max Strus. With both players on minimum contracts the expectation was that they would plug in to fill garbage minutes, perhaps get some time on court when covering for injuries or get us through some time when the starters needed some rest or load management. Both excelled way beyond expectations. Gabe Vincent's hustling nature won the hearts of the fans and became a prominent member of the Heat's backcourt and Max Strus showed he was more than just a sharpshooter and ended up finishing the preferred starting shooting guard ahead of Duncan Robinson.

The disappointment would have to lie with the offense. Too many times we relied on Jimmy Butler putting the team on his back to get us over the line. The team was brutal defensively with the team leading charges drawn by almost double the next team back and with Butler, Tucker, Lowry, Adebayo and Oladipo on the roster this was always going to be the ethos - that defense wins games. But we needed another player to take the load off Jimmy and although Tyler Herro excelled in his role off the bench, we were still left frustrated too many times with players such as Bam Adebayo, Kyle Lowry and Duncan Robinson on the offensive end. All three of these players in particular know they need to address that going into next season. 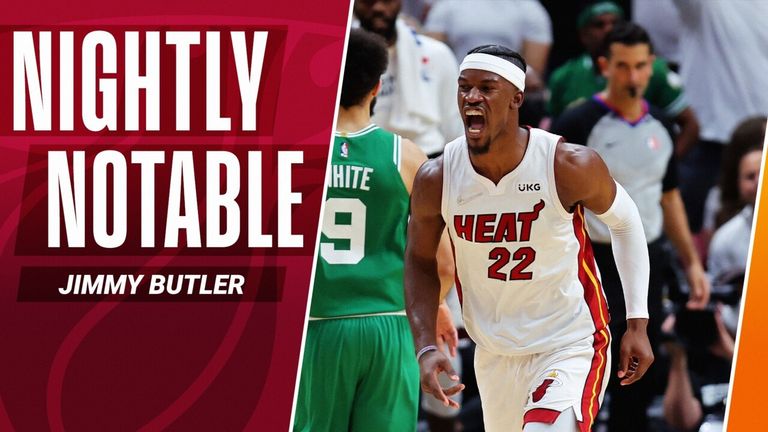 That said, the season was a successful one without doubt. Going to Game 7 in the Eastern Conference Finals is a great feat for this team. I never like to use injuries as an excuse because it's part of the game and every playoff side experienced their fair share but by the end of that ECF playoff stretch Miami had four of their five starters carrying injuries that would have kept them all out for 3-4 weeks if they were playing in the regular season.

And yet still it came down to a rimmed-out Jimmy Butler 3-point attempt in the dying stages of Game 7 against a very good Boston Celtics team which prevented Miami from going back to the NBA Finals for the second time in three years. The aim was to win. That's all the Miami Heat know, but the season was a memorable one and a successful one so I'm grading it an 'A'.

Assessing the offseason and 2022 NBA Draft for the Heat

Miami were very close last year, they're a good team and any game against them is always a grind and that won't change next year. But they're an ageing side and they lack a true scorer which would give Jimmy some much-needed help. Despite this, an offseason priority was to persuade PJ Tucker to take up his $7.5m player option for 2022/23. However, Tucker opted out of his contract to take up more money and years in Philadelphia which was a blow to our aspirations as it strengthens a conference rival and leaves a gaping hole at power forward.

On a much brighter note, Miami re-signed former All-Star Victor Oladipo to a two-year $17.7m deal. On first announcement, the deal was originally agreed at one year for $11m but this was renegotiated to two years for $17.7m to give Miami more financial flexibility on any further signings or trades.

Miami did add 19-year-old Serbian power forward Nikola Jovic to the team with their 27th pick of the draft. At 6'11", he's another player that the modern NBA seems to look for in the aspect of having size but also athleticism and a forward/guard combo skillset. He can handle, he can shoot from beyond the arc and has shown clear evidence of an intelligent basketball IQ during his time playing in Serbia.

However, at just 19 years old and despite him being one of the only power forwards on the Heat roster as it stands, I don't expect to see a major role or any significant minutes during his rookie season. He will need to add some weight and look to quicken his step as he gets used to the pace of the NBA as even during this year's Summer League he showed he has a way to go right now before he can compete for a role on this team.

The Heat's aims for next season

Coming off a run to the Eastern Conference Finals last year, Miami are in a good spot even if they run it back. The Heat have five players on the roster who are capable of being in All-Star conversations. But the East is so brutal this year, Boston have got stronger, Milwaukee will be a force again and Philadelphia have added well and will make a strong push for sure. The Heat only know the winning mentality so won't play for anything less than this. But we're working on a short title timeline due to the ageing squad. It's 'WIN NOW, RIGHT NOW' and the current roster construction screams a second round exit or, at its apex, another run to the ECF.

What has you most excited about next season as a whole?

The league is the most balanced it's ever been. There are legitimately up to 10 teams that will consider themselves a title contender this season and as a sports fan, what more could you ask for!? I'm excited for my team's chances but also cannot wait to watch the new young stars of the league take another leap. In my opinion, there has never been so much talent to hit the hardwood.

Three predictions for the season ahead...

Why should people watch the Heat?

The hardest-working, best-conditioned, most professional, unselfish, toughest, meanest, nastiest team in the NBA. That's the Miami Heat Culture. Whether you're on a max contract or an undrafted rookie, this is how we roll. This is the ethos. This is what we bring to every game. Whatever team hits the court, they are going to give the opponent a battle. You come off court knowing you've had a hard game against the Heat and that's what I love more than anything about them.