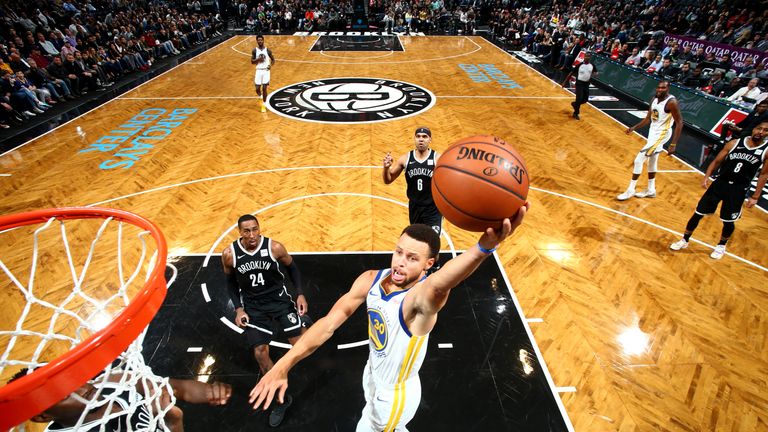 Highlights of the Golden State Warriors' clash with the Brooklyn Nets

Kevin Durant hit a jump-shot with 1:42 remaining before Steph Curry added three 40 seconds later as the Golden State Warriors resisted a late rally from the Brooklyn Nets to win 120-114 and record their fourth straight win on Sunday.

Durant and Curry combined for 69 points on the night, with Durant's hoop with 5:43 left giving them a 110-99 lead, only for the Nets to hit back with the next nine points to get within two as the Warriors were held scoreless for four minutes.

But Durant put an end to that drought with his jumper and after Joe Harris missed a three-pointer at the other end, Curry eased the Warriors' nerves with his seventh long-range effort of the game. 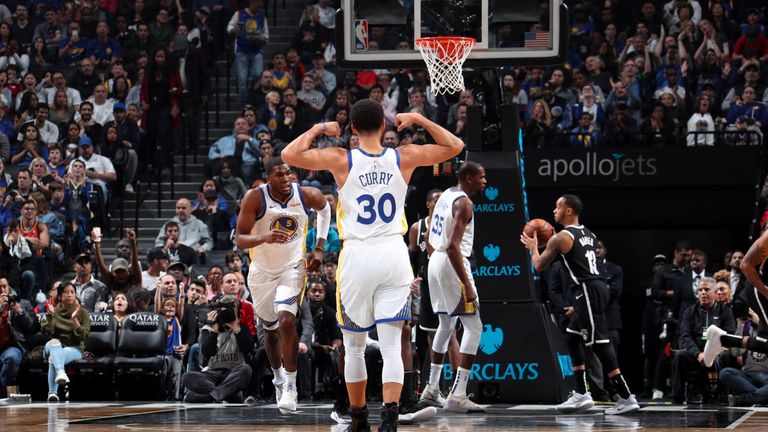 Steph Curry scores 35 points in the Warriors' win over the Nets, becoming the first player in NBA history to make five or more three-pointers in seven consecutive games.

Curry finished the game with 35 points, going 7-for-15 from range to set an NBA record of seven straight games with five or more three-pointers.

He was 11-for-26 overall, while Durant hit 11 of his 20 shots for 34 points. He also grabbed eight rebounds and dished out six assists.

Warriors head coach Steve Kerr said the pair were playing better together than ever before.

"The continuity of being together now for a while, winning back-to-back titles together, I think there's probably a better comfort zone, comfort area between the two of them than there's ever been," he said.

"I think we're playing faster, the game is a little faster, so we're getting out in transition a lot," said Durant. "Just making shots - it's a long season, I'm sure we're going to have games where we're up and down with our shooting."

Klay Thompson added 18 points for the Warriors, who were playing consecutive road games at New York and Brooklyn for the first time in their history and complete a four-day three-game trip in Chicago on Monday.

It was the Nets' seventh straight loss to the Warriors, with D'Angelo Russell top-scoring for the hosts with 25 points. The 22-year-old also posted six rebounds and six assists, while Caris LeVert finished the game with 23 points.

Allen Crabbe had 14 points, Spencer Dinwiddie 12 and Jarrett Allen 11 for Brooklyn, who made 20 three-pointers and outscored Golden State 60-33 from beyond the arc.