Kevin Durant scored eight of his 49 points in the final 1:19 as the Golden State Warriors rallied for a 116-110 victory over the Orlando Magic.

Durant connected on 16 of his 33 shots, four of his 10 three-point attempts and all 13 of his free throws on route to the fifth-highest scoring game of his career. The 49 points were his high since he poured in 51 for Oklahoma City at Toronto in March 2014.

The Warriors trailed by as many as 18 points before chipping away in the third and fourth quarters, finally taking a 102-100 lead on a 3-pointer by Klay Thompson with 5:26 to go.

After Orlando responded to go back up by three, another 3-pointer by Thompson drew the Warriors even at 107-all with 1:45 left before Durant took over.

He put the Warriors up by three with a three-point play with 1:19 to go, then boosted the lead to four with a 3-pointer after Terrence Ross had pulled the Magic back within 110-109 on a dunk with 1:11 left.

Thompson backed Durant with 29 points, as Golden State's two healthy All-Stars combined for 78 points while their teammates combined for 38.

Nikola Vucevic had 30 points and Ross 28 for the Magic, who had won in Los Angeles against the Lakers a day earlier. John Wall and Bradley Beal combined for 68 points on Monday as the Washington Wizards overcame a season-high 54-point game from James Harden to defeat the Houston Rockets 135-131 in overtime.

Wall scored 36 points and dished out 11 assists, while his fellow All-Star guard Beal added 32 points to secure an upset victory against last year's Western Conference finalists in the capital.

Washington started overtime with an 8-1 run capped when Otto Porter Jr. picked up a steal and fed Beal for a dunk with 1:50 left, and the Rockets got no closer than within three points the rest of the way.

Houston shot 2 of 7 in overtime with four turnovers. Reigning Most Valuable Player, Harden, missed three consecutive shots and turned the ball over twice in the final minutes of regulation but fed Clint Capela for an alley-oop that tied the contest at 125-125 with 9.8 seconds left.

Wall had the ball knocked away on a jump-shot attempt with 1.2 seconds left, and he then blocked Eric Gordon's jumper at the buzzer.

Markieff Morris had 22 points and 10 rebounds as the Wizards' bench outscored the Rockets' reserves 45-9.

Gordon scored 36 points, and Capela had 17 points, 14 rebounds and four blocks for Houston, who have now lost three games in a row. 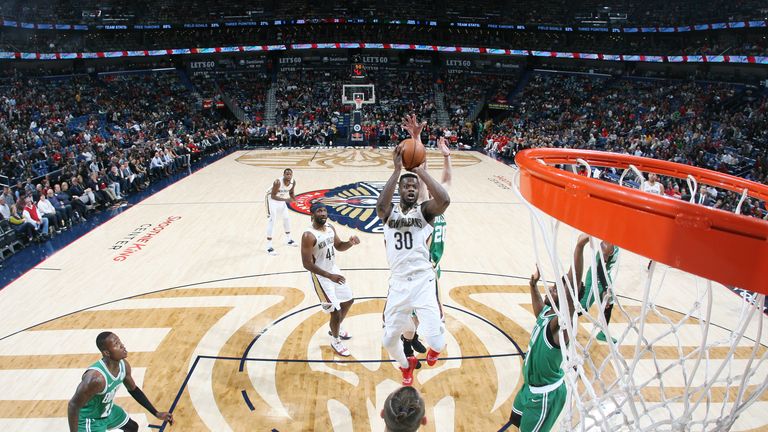 Kyrie Irving scored 26 points and handed out 10 assists as the Boston Celtics won at the New Orleans Pelicans in a matchup of struggling teams.

Al Horford and Jayson Tatum added 20 points each, Marcus Morris had 19 points and 11 rebounds and Terry Rozier came off the bench to score 14 for the Celtics.

It was a second victory in three for the Celtics, who before that run recorded three straight losses as they failed to live up to pre-season expectations.

Anthony Davis, returning from a one-game absence caused by a hip injury, had 27 points and 16 rebounds to lead New Orleans.

The Pelicans lost their fourth straight, but it was just their second loss in 10 home games. Nikola Mirotic added 25 points. 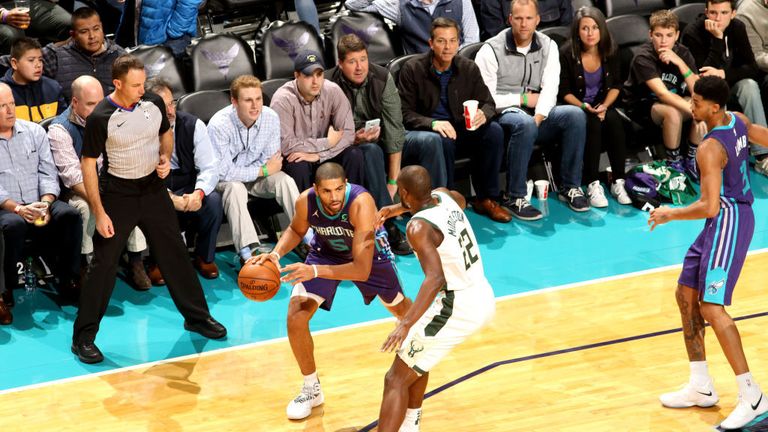 Kemba Walker and Jeremy Lamb scored 21 points each as the Charlotte Hornets held on for perhaps their most impressive win of the season by defeating the Milwaukee Bucks.

The Hornets trailed by 14 midway through the first quarter, but they dominated the second quarter, led by 13 at halftime, and then pushed the margin to as many as 25 points in the second half.

The Bucks got within a point in the final minute and trailed by three with the ball with 7.1 seconds remaining, but Eric Bledsoe missed the potential tying 3-pointer at the buzzer.

The Hornets snapped a two-game losing streak and got some revenge after losing 113-112 to the Bucks on opening night of the season in Charlotte.

Giannis Antetokounmpo was just one assist short of a triple-double, but his 20 points, 13 rebounds and nine assists weren't enough to prevent the Bucks have losing for the second time in their last three games. Highlights of the Indian Pacers' visit to the Utah Jazz in week seven of the NBA.

Doug McDermott scored a season-high 21 points off the bench while Myles Turner added 16 points in his first game back from an ankle injury to lift the Indiana Pacers to a victory over the struggling Utah Jazz.

Bojan Bogdanovic chipped in with 15 points and Tyreke Evans added 14 for Indiana, who had seven players score in double figures.

Derrick Favors scored 13 points and Rudy Gobert added 12 to lead Utah. The Jazz, who allowed Indiana to shoot 58.3 percent from the field, lost for the sixth time in eight games.

Both teams played without their leading scorers. Utah's Donovan Mitchell sat out a second straight game due to a rib contusion. Indiana's Victor Oladipo was sidelined with a right sore knee for a fourth consecutive game. 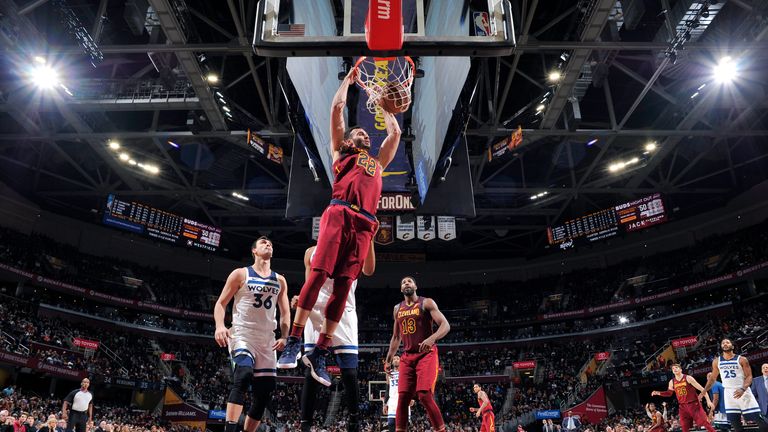 Karl-Anthony Towns scored 21 points and grabbed 10 rebounds to lead the Minnesota Timberwolves to a win at Cleveland.

Robert Covington scored 24 points on 8-of-12 shooting from the field, including 4-of-7 accuracy from 3-point range.

Derrick Rose came off the bench and continued to shoot well, hitting 6 of 13 and finishing with 12 points and four assists for Minnesota, who are is 6-2 since trading away All-Star guard Jimmy Butler.

Kyle Korver led the Cavaliers with 22 points off the bench. Rodney Hood added 20 points for Cleveland, and Tristan Thompson recorded his fourth straight double-double with 16 points and 11 rebounds. 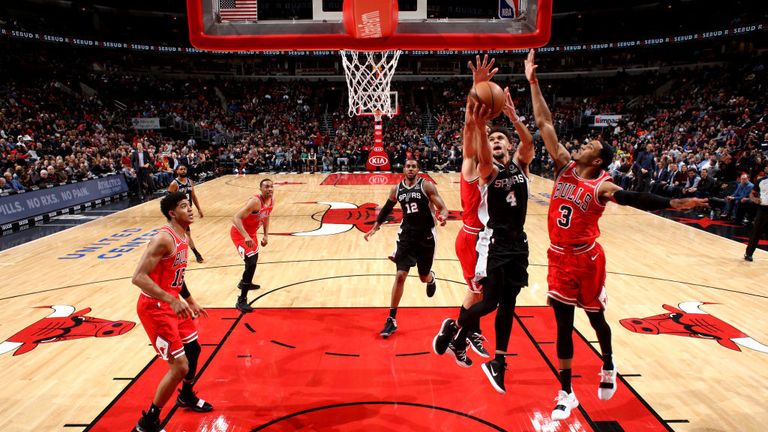 DeMar DeRozan scored 21 points and LaMarcus Aldridge added 20 - including five in a key late-game stretch - as the visiting San Antonio Spurs came back to beat the short-handed Chicago Bulls.

The Bulls led 101-98 with 5:58 to play before the Spurs leapfrogged to the front via a 10-0 run, with Aldridge accounting for half the points.

Chicago pulled within 108-107 on back-to-back 3-pointers by Ryan Arcidiacono, but Zach LaVine (28 points) missed a 3-pointer with four seconds to play.

After a foul and a steal in a last-gasp scramble, Arcidiacono (22 points) had a chance to win the game with a shot at the buzzer, but it was off the rim short.

While Aldridge and DeRozan grabbed the headlines once more, Patty Mills 17 points from just 10 shots off the bench were equally crucial in keeping the Spurs in the content.