Big star, big aspirations, big move. James Harden and the blockbuster trade he forced on Wednesday is all of that and more.

Everyone knew the meteor was going to hit. It was just a matter of when and how much of a dent it would make on the NBA Earth. And a sizable one it was. Harden leaves the Rockets, joins a fresh Big Three in Brooklyn and two other teams pitched in with the deal to get their share of the pie.

While multiple players and future first-round picks galore were scattered about, the centerpiece of course is an MVP and three-time scoring champ who, after eight seasons in Houston, had had enough.

The Rockets never reached the NBA Finals with Harden, trying and failing to find him a co-star that could help over that time. Harden went through Dwight Howard, Chris Paul and Russell Westbrook, and now gets to try his luck with former MVP and Oklahoma City team-mate Kevin Durant and - depending on his situation - Kyrie Irving. 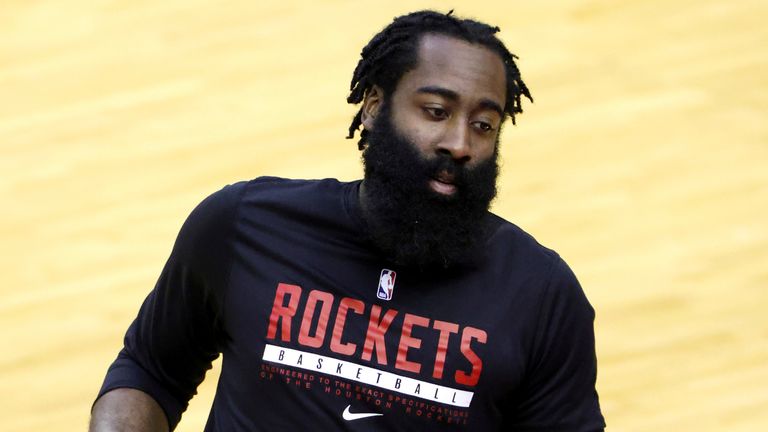 There is a lot to sort through, and a picture that will eventually develop once the trade dust settles. (Keep in mind that, because of the picks involved - they stretch to 2027 - anyone wanting to instantly see a final verdict will be very disappointed.)

Here's a sense of what the various teams and players involved are feeling at the moment:

The forced breakup with the Rockets was nasty and uncomfortable, but maybe it had to be in order to happen. Harden comes away with a smudge on his reputation for behaving like a bratty and unprofessional superstar. But in the end, he was the clear winner. All the deserved criticism thrown his way does not matter now. He got exactly what he wanted. He is in the easier conference, reunited with Kevin Durant, will share the ball with Kyrie Irving and has his best chance yet at a title.

The trick now for Harden is reinventing himself on the fly. No longer will the team revolve around his supreme isolation skills, and there will be nights when he's the third option, which could be a jolt to someone who finished high in the MVP vote over the last half-decade. Can his thirst for a title overtake his ego? Evidently he is confident it will, or else he would not have named Brooklyn as his preferred destination. Amidst a reported trade deal to the Brooklyn Nets, relive the unstoppable action of James Harden from the 2019-20 NBA season with the Houston Rockets

So it will be interesting to see Harden play off the ball and become more of a catch-and-shooter, and how he reacts when Kyrie waves him off, and whether he can overcome a shaky postseason body of work to gain the confidence in his two fellow stars, both former Finals heroes. Curiously, this will be the challenge for Mike D'Antoni, the Nets' offensive guru who could not lead Harden to the finish line in Houston.

Of course you remember how the Nets gambled their future on Old Paul Pierce and Old Kevin Garnett and how that turned out. Obviously, though, this is not the same situation; Harden is still in his prime, a threat to score 40 on any given night.

Besides, the three first-round picks and four first-round swaps that Brooklyn just surrendered might not be lottery jackpots like those Celtics picks became, provided the Brooklyn Big Three remain healthy and productive. Hey, it is a gamble, and that is what you must do to get a player of Harden's calibre.

Gone also are Caris LeVert and Jarrett Allen, a pair of solid young rotational players. But the good news for Brooklyn is Joe Harris was not sacrificed, and a 51 per cent shooter from three-point range will see more open looks than he ever dreamed. 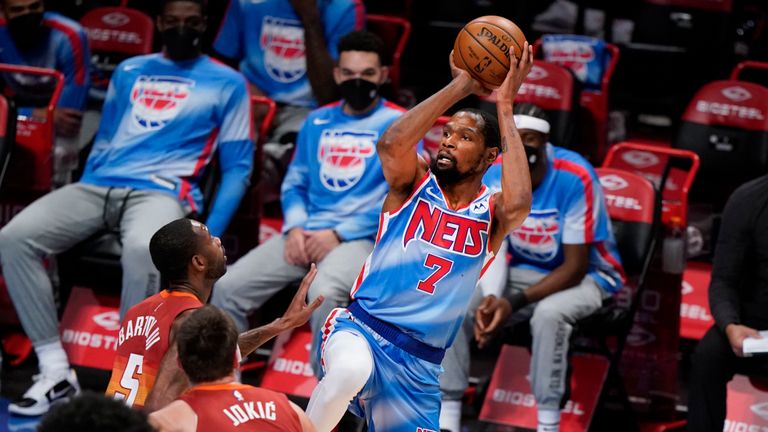 This is a big swing for the Nets, who are all-in and must win at least one title in the next two or three years to justify the trade. Their bench is thinner, especially when you account for Spencer Dinwiddie's season-ending injury, and their potential issues on defense and rebounding. But they can add a piece or two after the buyout deadline to restock, or sign a player currently unemployed on the cheap.

A few years ago he was an All-NBA selection with a fresh contract and unlimited future that looked secure. Now he is on his fourth team, still trying to recapture the level he enjoyed before his injury and facing free agency this summer.

Oladipo has shown a few throwback flashes this season, but were they teases or a more concrete hint of what's to come in Houston? This could work out for him provided he meshes with John Wall and enjoys a rebound of a year. He will get every opportunity to do so. There is money on the line, and a reputation to restore.

He gave everyone a glimpse of what he could do if given the chance to be a primary option during last season's restart. Not only did he have big scoring nights, he accepted the challenge of taking big shots. That said, you still cannot be totally sold that LeVert has the skills to be That Guy. His body of work screams Shotgun Rider.

Anyway, he will have the chance to be both on any given night with the Pacers, whose No. 1 option, Domantas Sabonis, rarely strays from the paint. Best of all, LeVert is a blend-in kind of player whose lack of ego will be a welcome addition on a team with like-minded players. He is averaging 18.6 points and six assists in 27 minutes, and those numbers should only rise. 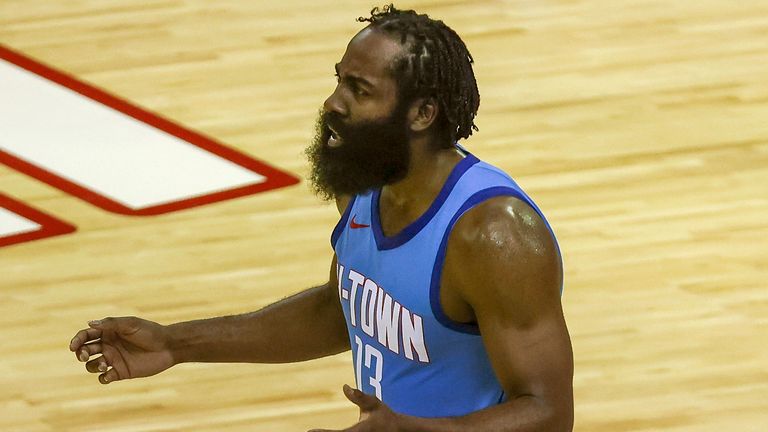 After a loss in which Houston had no runs, James Harden minces no words about his feelings on the Rockets

Would not you love to see all the deals the Rockets turned down for Harden over the last few months? Were any better than this? Did they wait too long and ultimately settle for a few cents less on the dollar when Harden hit the nuclear button Tuesday night and gave them no choice?

Rarely do teams that trade superstars get equal value in return. This goes back to the 1960s and Wilt Chamberlain. Usually, the team that receives the most players is the one who loses in the deal, if only because stars are so tough to find and often tougher to keep.

This represents a twist: Houston's main cache in the trade is picks, not players. The verdict on those picks will not be known for several years. At least the Rockets unloaded a big contract and gave themselves flexibility moving forward. In order to maximize the haul, though, rookie general manager Rafael Stone must make sharp and sound decisions with those assets and his new-found cap space.

What a smooth move by the Pacers, who were a limited partner in the four-team trade but made out quite well. Essentially, they traded Oladipo, a player they didn't really want who was on an expiring contract, for LaVert, a 26-year-old who is athletic and skilled and signed for the next three years.

Indiana, therefore, brings LaVert, Sabonis, Malcolm Brogdon, Myles Turner and, when he heals, TJ Warren. That is a good core that could stay intact for years. Remember, small-market teams that struggle to pay the luxury tax or attract big-time free agents must be creative when it comes to team building. This latest manoeuvre certainly qualifies. 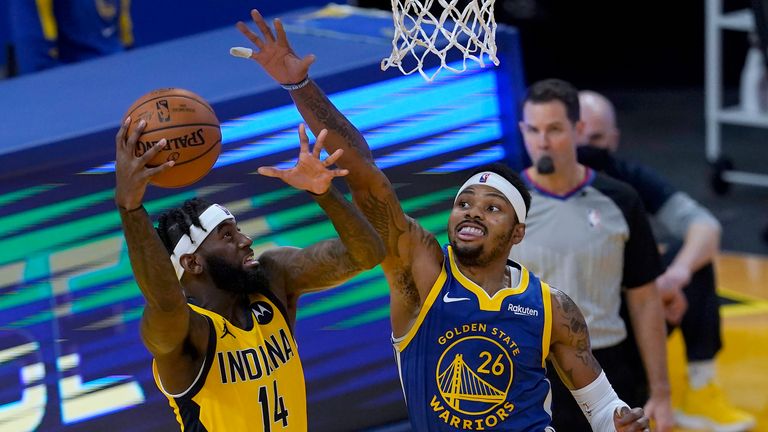 One of the league's premier shot-blockers goes from playing behind DeAndre Jordan to backing up Andre Drummond. You could make a case that Allen is just as good if not better in some ways than both players. He's certainly the future in Cleveland given that Drummond becomes a free agent this summer and might be traded before that.

It's a good trade for Allen personally because it was clearly done with keeping him in mind. Therefore, Allen should not have to sweat out extension negotiations next summer and finally has a team to call his own.

Funny how the Cavs have Allen, Drummond and JaVale McGee; that's 21 feet of centers. Only one of them is assured to be on the roster next season. If the Cavs are smart, they will give Drummond a ton of minutes to play up his value and then take the best deal at the deadline.

By adding Allen, the Cavs are gradually building a young core with upside. Allen, Collin Sexton, Isaac Okoro and Darius Garland are all under 23, and there is also Larry Nance Jr. just entering his prime. Now it is all about finding someone to take Kevin Love; that whopping contract extension they gave him is out of place on a team looking to adopt a different, younger personality. 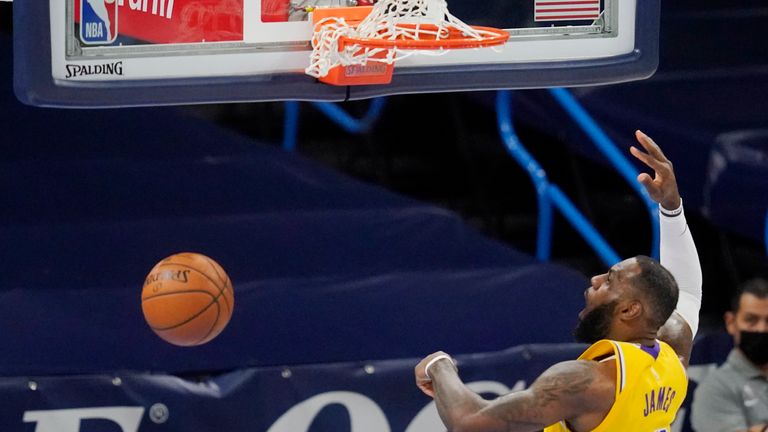 Check out the top plays from Wednesday night's NBA action

Well, sure, this is a trade that sent vibrations from Brooklyn to Milwaukee and Boston and Miami and Philly. Three of those teams - Celtics, Heat and Sixers - were involved to different degrees on the Harden talks before declining the chance to get him. Well, now they will really get him, so to speak.

While the Nets were good enough to be taken seriously as contenders even before the trade, they will now bring three stars, which gives them the edge over the others. Everything now depends on how well, and how quickly, the Nets make it work. Also, those other teams are probably hoping that Kyrie makes a habit of causing distractions like his ongoing leave of absence.

Of the contending teams, the Bucks are probably the most worried about Harden going to the Nets. This is supposed to be Giannis Antetokounmpo's year, right, much like last year and the year before? We will get to see how well that Jrue Holiday acquisition turns out; he will certainly have his hands full defensively when the Bucks play Brooklyn. By playing at a high level here on the other side of 35 and starting this season off with a spirited chase for MVP, LeBron James essentially sent Harden running. There's no other way to see it - Harden surrendered because he did not like his chances in Houston. Well, that is one more contender LeBron and the Lakers can cross off the list.

Also, Harden went East instead of joining a top team in the West. So unless the trade deadline helps the Clippers, Jazz, Nuggets, Suns or anyone else with title aspirations, the Lakers will see the same old in the West. Therefore, a sneaky "winner" in the Harden trade was the defending champs.