Coverage of the NBA playoffs continues on Thursday night as the Blazers visit the Nuggets down 3-2 in the series; Damian Lillard's Portland must win to survive, while Nikola Jokic will be hoping to lead Denver to the conference semifinals. Join us live from 1am on Sky Sports Arena

He was meant to be playing injured, carrying over a neck injury from a 20-point loss in Game 4 that hampered his general movement, shooting and passing. Nope. Try 17 points in the first quarter alone, including a perfect 5-5 from three-point range.

Luka Doncic scores 42, 14 assists and eight rebounds in the Dallas Mavericks Game 5 victory over the LA Clippers to lead the series 3-2

And the Clippers aren't stupid. They know he's the guy they have to stop. The Neo to their malevolent band of Agent Smiths. Which is why they deployed their small-ball switch-everything line-up despite Dallas throwing two monstrously sized spanners in the works by starting Boban Marjanovic and Kristaps Porzingis - 7ft 4in and 7ft 3in respectively.

It worked in Game 4, with Luka injured. In Game 5 it only seemed to spur him on.

Whatever head coach Tyronn Lue threw at the Slovenian phenom, different coverages and defenders in all shapes and sizes from Reggie Jackson to Paul George to Ivica Zubac to Nicolas Batum, Doncic remained completely unfazed. Cockily untroubled. All those devilish, make-believe step-back threes.

He drove into the lane for those effortless one-handed floaters whenever he pleased. He launched passes around the perimeter to open shooters at will, sometimes twice in a row, there and back again, if the first look wasn't quite wide open enough.

He controlled the game start to finish, monopolising the ball like an old school bully who has had enough of playing with the pipsqueaks and now just wants to make them go and cry to the dinner ladies. Sorry kids. Life isn't fair. Some of us are just born bigger, stronger and with an innate, otherworldly sense of the peculiar angles and rhythms of NBA basketball. Sucks, doesn't it?

And yet, despite Doncic's calm authority, this ended up a close-run thing. With just under five minutes to go in the third quarter Luka had 31 points. The rest of the Mavericks had 38 combined. As a result, Dallas were down by three, 69-72.

From that point on, Doncic scored or assisted on eight straight baskets while the Clippers scored only once and by the end of the third their lead was 89-75. He can do that to you. An avalanche of buckets as you blink.

In the fourth, and with Doncic on the bench, the Clippers began to roar back into the game thanks to some timely threes from the likes of Jackson and Marcus Morris Sr. Then, just like that, Kawhi Leonard made an and-one with 40 seconds remaining and with the pressure building, Doncic committed a crucial turnover. One point game, Clippers ball.

Unfortunately for the Staples Center's 'other' team, only Terance Mann and Nicolas Batum touched the ball on their most crucial possession, resulting in a missed layup by the Frenchman.

Tim Hardaway hit two ice cold free throws to make it 103-100 and with 8.8 seconds on the clock and a chance to tie the game the best three-point shooting team in the league couldn't muster one on command as Leonard, swarmed by Dorian Finney-Smith in the corner, apologetically launched a shot that knew it wasn't going in from the moment it left his hands. Final score 105-100.

"I played terrible at the end... It was all about one guy: Dorian Finney-Smith," Luka said afterwards, in typically understated fashion. It's impossible to agree with his assessment.

Dallas made 37 field goals in the game. Luka Doncic scored or assisted on 31 of them.

In the 11 playoff games he's played so far, he's scored 40 points in four of them. That's as many as Leonard has in a much longer career. Hall of Fame greats such as Larry Bird, Charles Barkley and Dominique Wilkins finished with only five such performances in theirs. And just because it bears emphasising: Doncic is only 22.

His final statline of 42 points, eight rebounds and 14 assists is one that has only been matched in a playoff game by LeBron James.

Wherever you look, history seems to be bending to his will. We have the rarest kind of player on our hands: one born to thrive under the very brightest of lights. Where Bane was moulded by the darkness Luka seems to be the opposite. Thrust under the high beams from birth.

On Wednesday night Doncic proved as much. Opposite the dizzying All-Star tandem of Paul George and Kawhi Leonard he was the only star in LA. The headline act, the leading man. The only one on the floor who truly mattered. 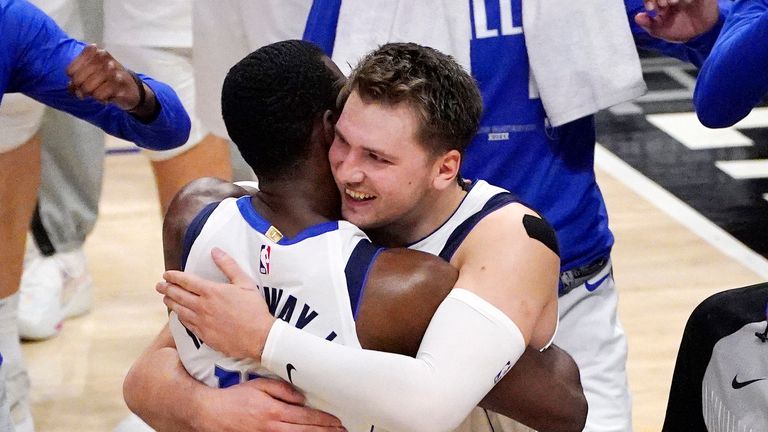 Dallas are now 3-2 up with a home game next. Win that, in this series where the visiting teams have dominated in spectacularly peculiar fashion, and the conference semifinals awaits. Beyond that anything is possible. Why? Because they have Luka Doncic. And no other team does.