Elsewhere there were wins for the Washington Mystics, Chicago Sky, Minnesota Lynx and Las Vegas Aces. The live WNBA action continues on Saturday as the Sky host the Connecticut Sun live on Sky Sports Action and Sky Sports Mix from 7pm. 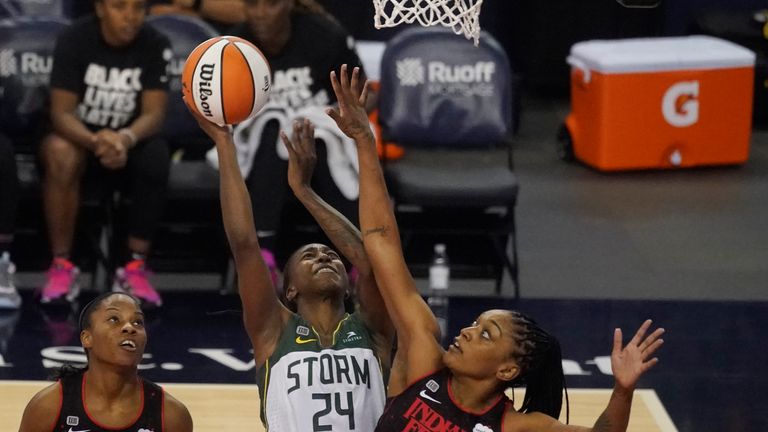 Breanna Stewart had 21 points and a season-high 15 rebounds, Sue Bird added 13 points with seven assists, and the Seattle Storm beat the Indiana Fever 79-69 on Thursday night for their fifth straight victory.

Seattle's lead was cut to 69-66 with 6:31 left until Stewart scored six points during a 10-1 run to put the Storm ahead by double-figures the rest of the way.

Jewell Loyd added 15 points for Seattle (12-2) and Katie Lou Samuelson scored 10. The Storm improved to 7-0 on the road this season.

Teaira McCowan and Jessica Breland each recorded a double-double for Indiana (1-13), which has lost nine straight games. McCowan had 13 points and 10 rebounds, and Breland finished with 10 points, 11 rebounds and four blocks. Tiffany Mitchell and Kelsey Mitchell each added 12 points. Natasha Cloud made two free throws with 24.6 seconds left to extend Washington's lead to 92-88 and Atkins added two more on their next possession.

Odyssey Sims sank a 3-pointer from the corner with 4.4 seconds left to pull Atlanta within 94-93. But Atlanta was called for a technical foul and Washington made 2 of 3 free throws before Aari McDonald's heave at the buzzer went off the backboard.

The Mystics were missing star Tina Charles, who was attending the premiere of her film 'Game Changer' at the Tribeca Film Festival in New York City. The film tells the story of Tanya DePass, an African-American gamer, determined to make the gaming industry more inclusive. Washington also lost Myisha Hines-Allen to a knee injury. Coach Thibault said she'll get an MRI on Friday.

Cloud finished with 10 points, nine rebounds and 11 assists for Washington (5-6). Atkins and Plaisance each made 10 field goals, combining to shoot 20 for 31. The Mystics were without Tina Charles and Myisha Hines-Allen. Kahleah Copper had 18 points and eight rebounds, Courtney Vandersloot added 12 points with 10 assists and four steals, and the Chicago Sky beat the Connecticut Sun 81-75 on Thursday night for their fourth straight win.

Chicago trailed 40-31 early in the third quarter before taking the lead, 49-47, on Diamond DeShields' 3-pointer with 2:27 remaining in the third. The Sky scored the first six points of the fourth for a double-digit lead.

Connecticut was still missing Jonquel Jones, who is over playing in the EuroBasket tournament. The teams face each other again on Saturday. 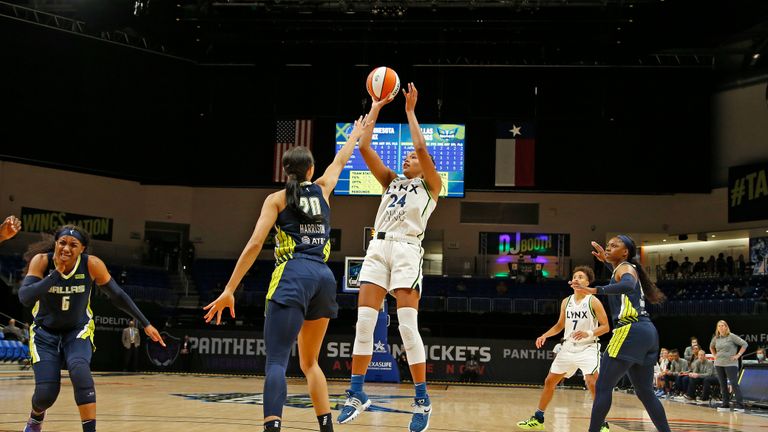 Kayla McBride scored a season-high 22 points, Sylvia Fowles had 14 points and 12 rebounds for her 170th career double-double, and the Minnesota Lynx beat the Dallas Wings 85-73 on Thursday night.

Minnesota had a five-point lead after three quarters until Damiris Dantas opened and closed a 10-0 run to extend the advantage to 70-55. The Lynx scored 21 of the opening 29 points of the fourth to pull away.

Get NBA & WNBA news on your phone

Want the latest NBA & WNBA news, features and highlights on your phone? Find out more

The Lynx led 43-33 at the break behind 10 points and seven rebounds from Fowles.

Las Vegas scored 33 points in second quarter to help build a 55-34 halftime lead. Betnijah Laney, Reshanda Gray and Michaela Onyenwere combined to score 32 of New York's 34 first-half points and the rest of the Liberty were 1 for 19 from the field.

Laney scored 20 points for New York (6-6). Gray had 17 points and Rebecca Allen added 14. Sabrina Ionescu, who played for the first time since June 5 due to an ankle injury, had one point, four rebounds and three assists in 15 minutes of play.