The WNBA All-Star Game is live on Wednesday night from midnight on Sky Sports Mix with a prime time replay being shown on Sky Sports Arena, Thursday evening at 6:30pm

The WNBA is celebrating 25 years with this season, but this will be just the 17th official All-Star Game in the league’s history.

Being a summer sport, it often competes with other leagues and competitions, especially FIBA regional events and - once every four years - the Olympic Games.

The latter has traditionally made it difficult for the WNBA’s best players to be selected to the All-Star Game because, by definition, the best players are usually selected to represent their respective countries and the dates usually clash.

In 2004, the league made an effort to retain interest while the international game was being played and it hosted an unofficial All-Star Game, which for various reasons was titled The Game at Radio City and featured the WNBA versus USA Basketball.

With it taking place during the early stages of the league and long before the rise of women’s basketball more generally, the WNBA was top heavy. With most of the best players suiting up for USA Basketball the national team wiped the floor with what was left to represent the league. 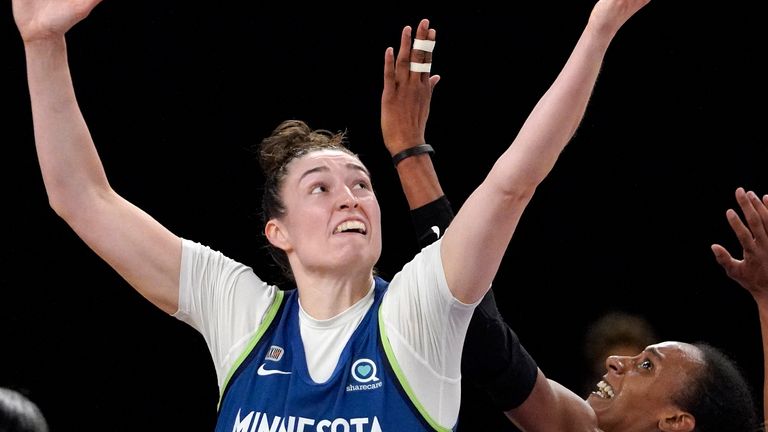 Check out the top five plays from Sunday night in the WNBA.

In 2021, and for the 2020 Tokyo Olympic Games, the concept is back, but this time it has been adopted by the WNBA as an official All-Star Game. It is fantastic to see the league building on its momentum and offering fan engagement events for casual viewers, and the storyline of the Team USA snubs wanting to beat the Olympic squad while representing the All-Stars only adds intrigue for die-hard fans.

But given the sporadic nature of the WNBA All-Star Game in previous seasons, you could argue that it has been seen as a secondary matter of importance. So what does that say to the players who compete for these opportunities each season?

“When you’re fortunate enough to go to multiple All-Star games,” Candace Parker told Sky Sports NBA, “and you realised my team-mate, Kahleah Copper, it’s her first time here, you realise again how special it is to be a top player in the best league in the entire world.”

Parker has seen it all and done it all. She won Rookie of the Year and Most Valuable Player in the same season with the LA Sparks (2008), had a child early in her career only to return and win a championship in 2016. She has two Olympic gold medals under her belt but missed out in 2016, so Parker would love to show the national selection committee what they are missing. And while she hasn’t taken her sixth All-Star Game for granted, now playing for her hometown Chicago Sky, it perhaps means more to some of those first-timers who are representing the league.

Brionna Jones from the Connecticut Sun is one such first-time player at the game, but she will have a teammate alongside her. It’s not Jonquel Jones’ first rodeo, but the MVP candidate was excited at the prospect of beating Team USA with the WNBA All-Stars and promised that she’ll tell her grandchildren about the year she should have won Olympic gold if they succeed.

Brionna said: “Being named an All-Star in any season is an achievement because you’re still competing with the best of the best in the WNBA, so to be honoured in that regard by the players and the fans is still a huge achievement no matter what year it is.”

Jones felt it was especially important to those players who might only have one or two standout seasons in the league. There are few spots available, making it much harder to retain staying power in the WNBA. She said: “I’m happy they did it this year because in the past there have been people who’ve had really good seasons and not been able to be on the All-Star team because it’s been an Olympic year. Some people miss out on that honour so I’m pleased they’re allowed to do it this year.”

Dearica Hamby is another first-timer and she will have Liz Cambage suiting up alongside her as they face their fellow Aces A’ja Wilson and Chelsea Gray. As a reigning, two-time Sixth Player of the Year, she has plenty of plans as a first-time All-Star and her daughter will be there for the experience as well. Hamby will be donning the WNBA’s Orange Carpet with Amaya, where they will be wearing matching Jordan sneakers.

Hamby said: “A championship is the most important thing for everyone, but it’s a nice way to get the players around each other. Our league is like a family, we’re all cool with one another, and support each other. But it’s nice to bring everyone together and relax a little bit.”

The ability to take stock of the season and appreciate the occasion is one that shouldn't be overlooked.

The difference in this year’s exhibition compared to the previous iteration in 2004 is that the competition is a lot higher when you remove 12 American players and put them on Team USA.

Cambage is on the All-Star Team but she will also be at the Olympics, representing Australia. Satou Sabally will be representing Germany in 3x3 Basketball. Jonquel Jones just led Bosnia and Herzegovina to a EuroBasket appearance but the country didn’t qualify for the Olympics, and neither did Hungary, who Courtney Vandersloot opted to represent.

She said: “This is only my third and I’ve been in the league for 11 years, so I understand how special it is to be selected. Every year there’s people that probably deserve it that don’t get on the All-Star Game. It’s special and something I’ll never take for granted.”

Had each of these athletes been born in the USA or gone down the USA Basketball route - some are American but preferred to represent another nation - they could have been on this year’s roster. And when you add national-level talent that didn’t make the cut, such as Candace Parker, DeWanna Bonner and Arike Ogunbowale, as well as a crop of players who have taken a big step up this year - Betnijah Laney, Kahleah Copper and Brionna Jones - this could be a tough game for the national side.

When you throw in the fact that the potential starting point guard and shooting guard Sue Bird and Diana Taurasi are attempting to play in their fifth Olympics, you know youth might be an issue.

Taurasi has already said it is unlikely she’ll play at the All-Star Game, and there are a few Olympic debutantes, such as Skylar Diggins-Smith and Ariel Atkins. USA Basketball will have to lean heavily on its top tier.

While it might be an exhibition and a celebration of the league to engage casual fans, this year’s All-Star Game could have big implications thanks to the controversy around who did and didn’t make the cut for the Olympic squad the WNBA will be playing against.