Outside of Connecticut, the next tier of WNBA teams is chaotic

In Game Of Thrones, Littlefinger once described chaos as a ladder.

With injuries, trades, EuroBasket and other factors leading to a shake-up of the WNBA hierarchy, teams are starting to emerge on rungs of the league ladder - several of them in positions you might have expected prior to the season.

In the off-season, the impression of the league zigged when Breanna Stewart, Diana Taurasi and Sue Bird went down with an injury. It zagged when Liz Cambage landed with the Las Vegas Aces. But going in a straight line throughout the chaos, climbing up the ladder, is the Connecticut Sun.

Pegged as one of the five players worth watching as the season started, Jonquel Jones has led the Sun to a ridiculous 8-1 record since the season tipped off on 24 May. It was her team-mate and point guard Courtney Williams who assured the Double Clutch podcast that Jones would be one of the league's best players within the next two seasons, and she was right. In 30 minutes per game, the big is averaging 17.2 points, 12 rebounds, and nearly 3 blocks. 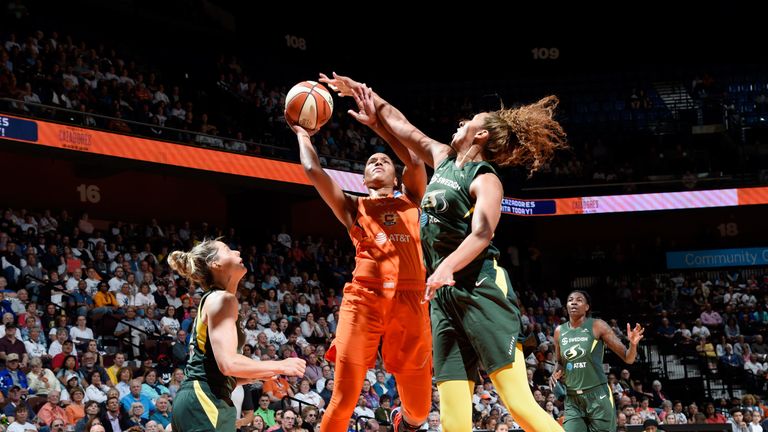 In 2009, The Ringer's Bill Simmons (then writing for ESPN) introduced the Ewing Theory, named after the success of the New York Knicks, when center Patrick Ewing wasn't in the line-up. This iteration of the Sun is another contender for the Ewing Theory now that Chiney Ogwumike has been traded away from the team.

After finishing with 21 wins two seasons ago with Ogwumike injured, her return saw the franchise hope for an increase in success and a deeper run into the playoffs. But they couldn't go to that next level, so it only made sense to move Ogwumike on. 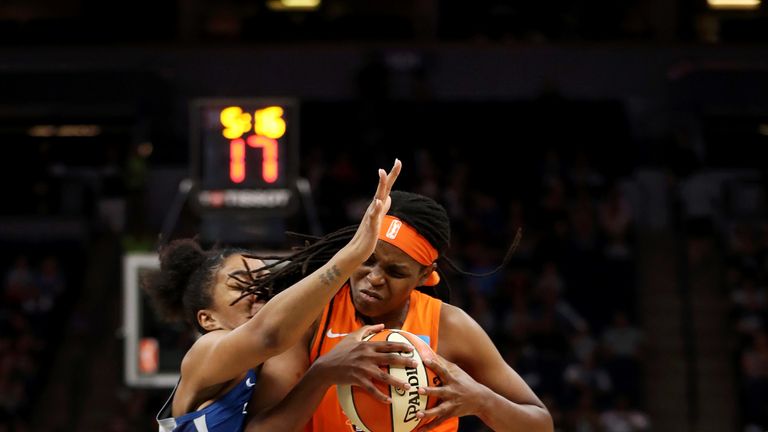 One team Connecticut recently took down was the Minnesota Lynx. What started out as high hopes for Head Coach Cheryl Reeve's squad came to fruition as Sylvia Fowles and Odyssey Sims led them to a 4-1 record. Since then, however, the team has lost four straight and hope to regain composure this week when they take on the New York Liberty and the Indiana Fever.

Despite their records, both teams have proven dangerous this season, especially as players in New York have been stepping up to support Tina Charles. The former MVP still leads the team with 18.2 points and 9.7 rebounds but her form has slipped since erupting during the season opener with 32 points, and the likes of Amanda Zahui B and Kia Nurse have been helping out.

One of the three teams the Liberty managed to beat was the Las Vegas Aces. Three consecutive No 1 Draft picks and a trade for one of the most dominant players in the league had many assuming this was a championship team in waiting. 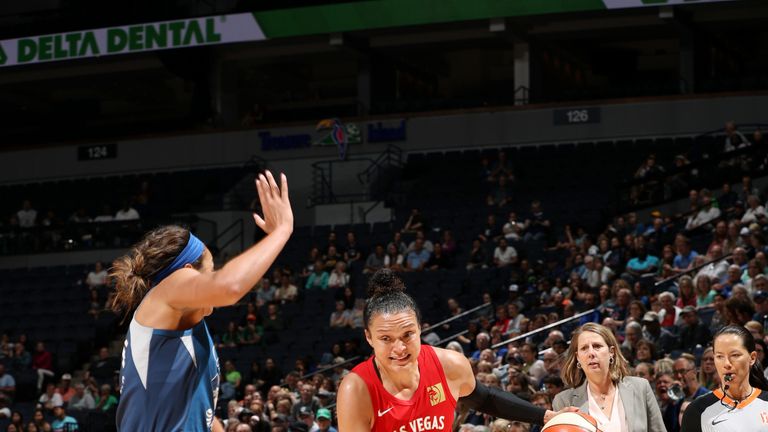 But after a slow start with Liz Cambage in the line-up, the team has defended the process. On the WNBA Weekly podcast, forward A'ja Wilson said: "This is just year two of being in Vegas. Of course, we have great pieces to our puzzle, but it takes time... to get to know each other and to understand what coach wants from us."

During a revenge game, the Aces took out their frustrations on New York by scoring 100 points in a win. Las Vegas followed it up by handing the Lynx their fourth straight loss, and face a tough task against the Washington Mystics this week.

However, the nation's capital is playing without one of the best players in the world in Emma Meesseman and her Belgian team-mate Kim Mestdagh while they are at EuroBasket. 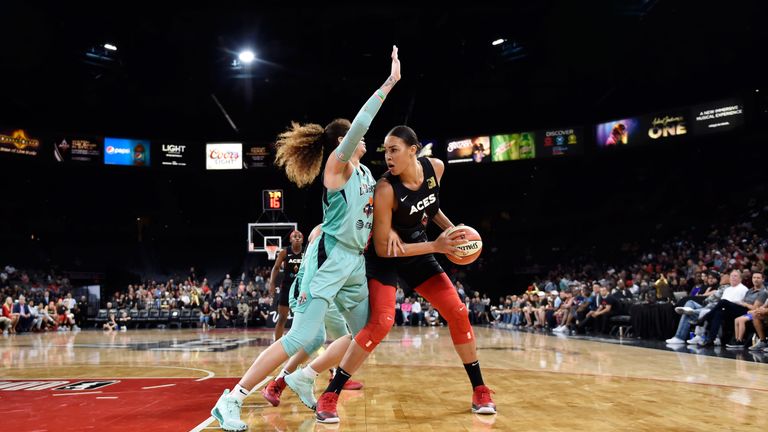 While the EuroBasket tournament takes place, the team faces the Aces twice, the Los Angeles Sparks twice, as well as the league's best Connecticut Sun and the surging Chicago Sky.

Sitting at 4-2, Chicago's only losses have come from the Mystics and Lynx. But the sky is looking clear for new head coach James Wade, who has the team playing solid basketball and picking up wins against teams they are supposed to. Beating the Indiana Fever is no great achievement, and handing losses to the Seattle Storm and the Phoenix Mercury when they are struck with injuries to their best players is not impossible. But the young team is showing grit in close games.

Diamond DeShields is learning to take on more responsibility in her second year. With 14 points per game to her name, this does not do justice to what the guard is achieving. Her splits of 42.9% from the three-point line, 42% from the field and 80% from the free-throw line add up to 50.5% true shooting percentage. She is also managing 4.7 rebounds per game and 2.3 assists on top of 1.5 steals. 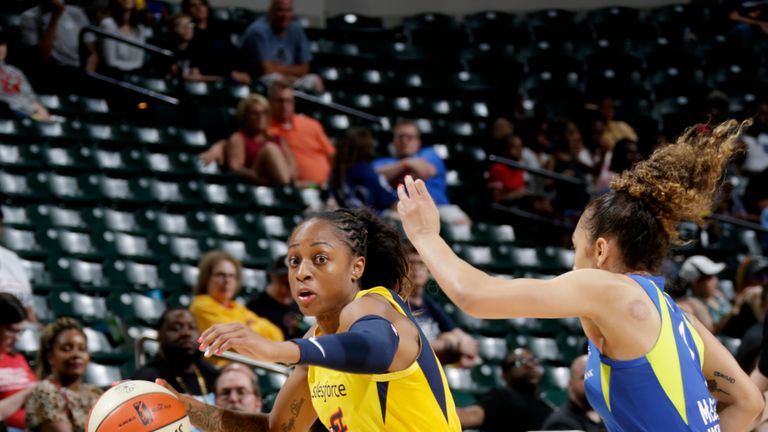 Under Wade, Chicago are becoming a solid defensive squad, allowing 100.5 points per 100 possessions, good for sixth in the WNBA, but they are only scoring 98 points per 100 possessions, and are still struggling to find their form on offense. This will take time with a new system, but the defense is keeping them in the pack of nine teams that are within two wins chasing the Sun.

Bringing up the rear is the Phoenix Mercury, who are playing without Taurasi. DeWanna Bonner is the only player in the league managing 23 points and 8 rebounds per game, so if the team can turn around a few tough losses and get back into a playoff position by the All-Star Game, you could see Bonner in the MVP conversation. And while the Dallas Wings have faced tough injury luck, the Atlanta Dream are struggling to find the form they had last season, as they await the return of Angel McCoughtry.

It is difficult to believe that the Connecticut Sun are already just seven games away from the same number required to make the playoffs last season, but the parity that the league saw in 2018 is engulfing the rest of the WNBA, making this year one that will go down to the wire again.