The 2018-19 season began with a welcome hello - George spurning the Lakers and signing a contract extension with OKC - and ended with a devastating goodbye, via Damian Lillard's sarcastic wave after a killer three-pointer sent the Thunder home in the first round of the playoffs. 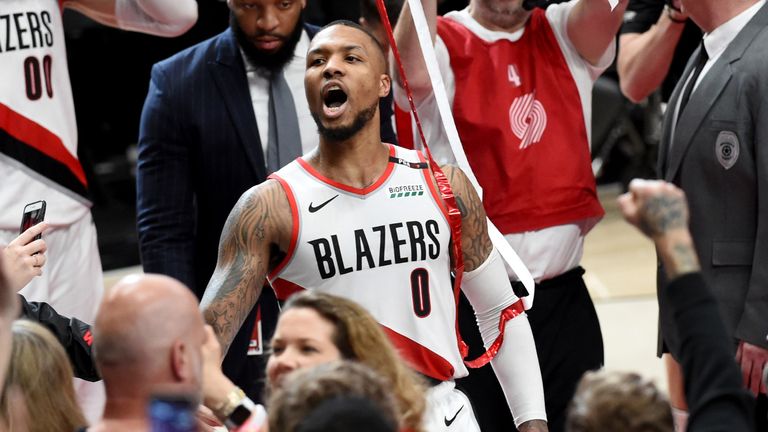 What happened in between was a mixture of good and not-so-good. The positive was clearly George, who delivered the finest season of his career and finished No 3 in Kia MVP voting. George essentially became the best player, if not the face, of the Thunder by leading the club in scoring (28.0 points per game) and leading the league in steals (2.2 per game) while adding 8.2 rebounds and 4.1 assists.

This was made possible by Westbrook yielding to George on multiple occasions in games, providing his co-star plenty of freedom. Westbrook seemingly wanted to make sure George was happy, dropping his usage rate to 30.1 per cent - the lowest Westbrook had posted in a decade.

Yet he proved underwhelming as a shooter (42.8 per cent) and saw both his three-point and free-throw percentage drop notably for a second straight season after career-best marks during the 2016-17 MVP campaign. That said, Westbrook did average a triple-double for an unprecedented third consecutive season (this time: 22.9 points, 11.1 rebounds and 10.7 assists per game).

Together, this All-Star duo constituted the bulk of the Thunder's offense and playmaking. OKC did get decent efforts from Jerami Grant, the athletic forward who finally developed a trusty three-point shot, and reliable center Steven Adams.

However, they missed Andre Roberson's defense after knee surgery wiped out his season. Second-year swingman Terrance Ferguson's development as a consistent shooter and rotational player has been more gradual than hoped. And for the second straight season, George and Westbrook weren't enough to escape the first round.

One week into free agency, Thunder GM Sam Presti received a message that he'll never soon forget: George, requesting a trade to the LA Clippers. It was the start of a seismic shakeup in OKC, triggering a series of events that turned the roster upside down and cost the Thunder their two best players - one of whom was Westbrook, the loyal and hardworking franchise rock.

Neither Presti nor OKC envisioned or asked for this, even though the playoff ouster at the hands of the Portland Trail Blazers was discouraging and on some levels embarrassing. By all accounts, Westbrook and George had a fine working relationship and OKC was among the league's contenders, though clearly in the second tier. Overall, the Thunder had a star duo and a smart GM equipped to keep adding to the nucleus.

But the trade request was a gut punch for Presti. He never saw it coming and was suddenly forced to reorient the team's direction. George wanted to join Kawhi Leonard with the Clippers, and the ripple effect reached Westbrook.

After 11 seasons with OKC, Westbrook wasn't willing to sit through a rebuild, nor would it be fair to ask him to do so. Therefore, Presti was leveraged into making a pair of massive deals in the span of weeks.

Presti made the most of the situation, setting OKC up very nicely in the future by stockpiling seven first-round picks from the Clippers and Rockets (two originally belonging to Miami) along with four first-round swaps. That's quite a haul, and should either the Clippers or Rockets falter between now and 2026, OKC could score big. If nothing else, the Thunder can package those picks in future deals. Basically, Presti has options, which is the best he could ask.

He also grabbed another first-rounder, this one from Denver, a top-10 protected 2020 pick in exchange for Grant. With rebuilding underway, OKC cut ties with Grant, who will be a free agent next summer.

As if Presti didn't grapple with enough issues, he still has a massive one as the season approaches: what to do with Chris Paul?

Paul, 34, was part of the deal with the Rockets, and it's a sticky situation for OKC. The Thunder don't need Paul, per se and point guard Gilgeous-Alexander represents the team's future at the position. Besides, Paul has struggled to stay healthy at this late stage of his career - playing just 177 of 246 regular-season games the last three seasons - has a bloated contract and is clearly a win-now player.

He makes about zero sense for OKC to keep around. However, the Thunder might not have a choice. He has two seasons and $80m remaining before coming up on a player option for a third season at $44m. Basically, either OKC or some other team is on the hook for $120m against declining returns.

It's a delicate situation for Presti and also Paul, who has never won a championship and certainly would rather be in position to contend as opposed to scrapping at the playoff fringes, even if he's saying all the right things for now.

One scenario, or a hopeful one for Presti and Paul, is a desperate team comes calling before the trade deadline and presents a deal, whether it's this year or next. If OKC holds onto Paul for at least another season, bringing him closer to the end of his deal, the perceived value could rise on a rental.

There is no perfect resolution for OKC and Presti just needs to take the one that hurts less. Presti might even find a taker for Gallinari, an efficient scorer coming off a career-best run, who has far less of a financial commitment than Paul.

Overall, it was a stunning summer for OKC with far-reaching ramifications. Presti remains a shrewd GM and he has options (and assets) as he tries to reboot the franchise. The outcomes of his efforts will shine light on how deeply impactful Westbrook and George's exits have been.

Veteran NBA writer Shaun Powell has worked for newspapers and other publications for more than 25 years. Follow him on Twitter at https://twitter.com/Powell2daPeople

The views on this page do not necessarily reflect the views of the NBA, its clubs or Turner Broadcasting.