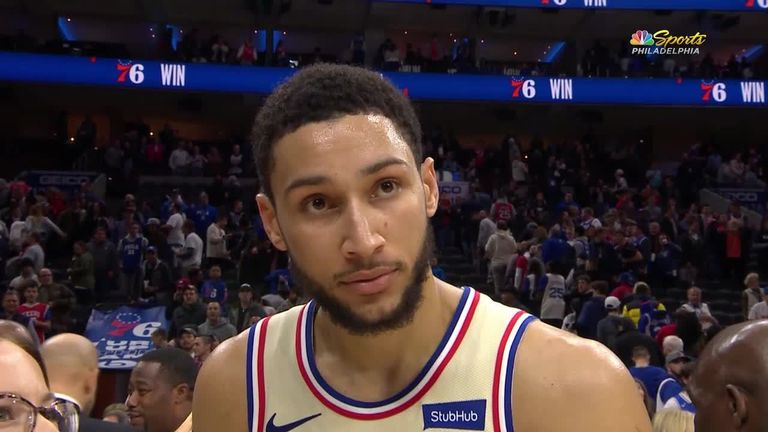 Ben Simmons played suffocating defense on Saturday to keep the 76ers undefeated at home, then credited the Philadelphia home crowd for the win.

"(It's) the fans," Simmons said, after stealing the ball three times the final 13.9 seconds of the game to lead Philadelphia to a 119-116 victory over the Indiana Pacers.

"I love being able to get steals and turn guys over," added Simmons, who finished with 15 points, 13 assists, six rebounds and four steals. "I take pride in it and it gives us energy."

The Pacers led 114-113 with a chance to go up more when Simmons intercepted T.J. Warren's pass with 13.9 seconds remaining, then assisted Tobias Harris for a breakaway dunk that gave Philadelphia the lead with 9.9 seconds remaining.

"I was going to steal it," Simmons said. "If everybody on the backside does their job, it's easier to make a play."

After a timeout, Simmons then stole Jeremy Lamb's inbounds pass with 7.9 seconds remaining. After a number of free throws on both ends of the floor, Simmons clinched it for the 76ers when he stole Lamb's three-quarter court inbounds pass. 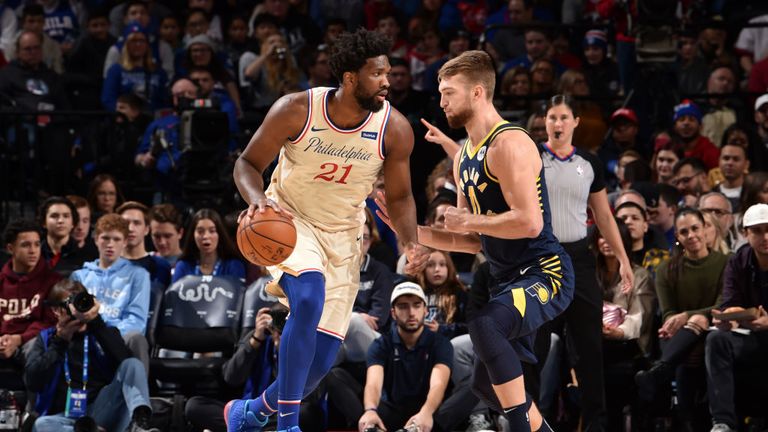 "Those turnovers late were costly," Pacers coach Nate McMillan said. "That was poor execution on our part."

Embiid had 32 points and 11 rebounds and was 15 for 15 from the free throw line. In three games since going scoreless for the first time in his career at Toronto on Nov. 25, the star centre is averaging 30.7 points and 14.7 rebounds while making 40 of 44 foul shots.

"I changed my mindset," Embiid said. "I hadn't been as aggressive, so I've been more aggressive creating contact and causing other people to foul me."

Harris scored 22 points for Philadelphia, which won its third straight while improving to 9-0 at home.

Warren had 29 points and Brogdon added 28 for the Pacers, who had won five straight. Indiana opened a gruelling five-game, seven-day road trip.

Both teams were playing the second game of a back-to-back, but neither offense was sluggish. Indiana finished 55 per cent (42 of 76) from the field while Philadelphia shot 49 per cent (38 of 77).

The return of T.J. THE GREAT

Brown spoke glowingly before the game about T.J. McConnell, who played the previous four seasons for the 76ers and was with Brown at the beginning of their rebuilding process.

"I just loved how hard he played," Brown said. "He plays with his heart on his sleeve and this city loves him."

Brown said the intangibles are part of what attracted him to McConnell, but the guard showed he's more than just an "effort" guy.

"He can actually play and play well," Brown said. "I'm very proud of him for his journey. I have a fondness for that man."

McConnell was feted with a video tribute in the first quarter, then received a standing ovation and was embraced by Brown when he entered with 2:59 left in the first. He also was presented a framed 76ers jersey prior to the contest by general manager Elton Brand.

The guard finished with six points and three assists in 11 minutes off the bench.

Simmons admitted seeing McConnell in another uniform felt "weird," and gave praise to his former team-mate after the game.

"I used to watch T.J. McConnell every night and give all his effort," he said. "So many people here love him, he's done so much for the Sixers. I've got a lot of love for him."

Save over 40 per cent with NOW TV