Victor Oladipo was playing his way back to full fitness when the NBA season was suspended. Now the Pacers guard is revising his preparation in the event that games resume.

His expected increased playing time, his hopes of chasing a home playoff series and taking the Indiana Pacers on a deep postseason run went on hold at least a few more weeks.

Now, 14 months after suffering a serious knee injury, he's back home in Miami again, away from team-mates again, doing what he can to be ready when games resume.

"It hurt just because it took me a while to come back and then, obviously, this happens and now you miss more," Oladipo said on Thursday on a conference call. "I was out there playing, going as best I can, as hard as I can. To say if I was 100 per cent out there, I don't know if I could say that. I am just going to try and do my best to get better and get stronger."

A year ago, the two-time All-Star Oladipo went home to rehab from surgery on a ruptured quad tendon in his right knee. The gruelling recovery took a full year to make it back to NBA games and another month to start looking like his old self. 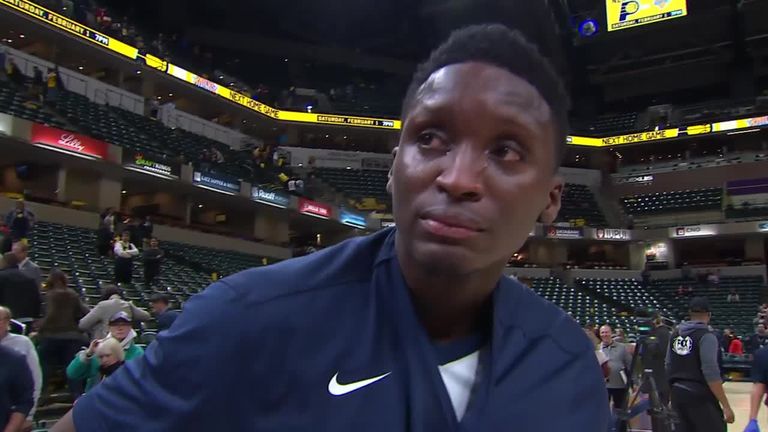 In his last five games, Oladipo averaged 18.6 points, 4.8 rebounds, 3.6 assists, 1.4 steals while shooting 47.1 per cent from the field. His best game was his last: 27 points on 9-of-16 shooting and 5-of-7 on three-pointers with seven rebounds and four assists in the Pacers' narrow loss to the Celtics on March 10.

But even if the season restarts, the Pacers know they can't just hit the go switch. Oladipo must work his way back.

"I think we could adjust as we go but there will be some limitations," Pacers president of basketball operations Kevin Pritchard said on Wednesday, noting 40 minutes per game would be too much.

"We want to put a plan in place for Victor to come back. But you know me, we will err on the side of caution with Victor, and the long term, every day. We do that with all of our players. But Victor's situation does create some special, unique circumstances." Victor Oladipo hit this deep three late in the third quarter, but it wasn't enough as the Indiana Pacers lost to the Dallas Mavericks

Oladipo has adapted by making some changes around the house.

He converted his garage into a gym, where he lifts weights regularly along with any other work assigned by the team's staff, trainers or his physical therapist.

There are also one or two Zoom meetings each week with his teammates and coaches, the next one coming on Friday.

No, it's not basketball but it's all they can do at the moment.

"I would say the way you stay in game shape is you play games," Pritchard said. Our strength and conditioning staff is checking in on them, they have given (workout) programs to every player. I think one of the things that has been most challenging is finding a gym and being the only one in that gym."

That's why Pritchard hopes to get as many Pacers players back to Indianapolis when states do reopen. If nothing else, they would at least have workout facilities, face-to-face communication and some semblance of togetherness.

"Even before this surfaced, I was dealing with trying to come back, trying to get my quickness back, learn how to walk again," he said. "But I found a way and I am going to keep finding a way until I think I fulfill my potential. And to be honest, I am not going to stop even when I have done that because I always think I can do more."