Steph Curry passed Wilt Chamberlain as the all-time leading scoring in Golden State Warriors history as he erupted for 53 in Monday night's victory over the Denver Nuggets. Curry became the all-time leading scorer in Warriors history with the ninth 50-point game of his career, exploding for 53 in a 116-107 victory over the Denver Nuggets.

The Nuggets might have lost more than just a second straight game, as standout guard Jamal Murray went down with an apparent left-knee injury with 50.6 remaining in the game. Murray, who had missed the previous four games with a sore right knee, was escorted straight to the locker room after the fall, which came at the end of a 17-point night.

Needing 18 to equal Chamberlain's record, it took him just 10 minutes and 20 seconds to catch and pass the Warriors legend, with five three-pointers and two free throws setting the stage for a driving layup over former team-mate JaVale McGee for his 18th and 19th points of the night.

A historic performance on a historic night for Stephen Curry.@UAbasketball || Second Look pic.twitter.com/f1lnzG56F6

Despite Curry's early brilliance, the Warriors trailed for most of the first two-and-a-half periods before taking charge with a 43-point third-quarter that opened a double-digit lead.

Curry's 53 points were his third-most this season, trailing only a career-best 62 against Portland in January and 57 at Dallas in February. Draymond Green had 18 points, seven rebounds, seven assists and four steals for the Warriors, while Andrew Liggins added 17 and Kent Bazemore 14.

Nikola Jokic finished with 27 points, 12 rebounds and eight assists for the Nuggets. Michael Porter Jr had 24 points and Monte Morris 10 for Denver. Julius Randle scored 34 points and grabbed 10 rebounds as the New York Knicks took control in the third quarter, fended off a comeback attempt in the fourth and recorded a 111-96 victory over the Los Angeles Lakers to extend their win streak to three games.

Randle thrived against his former team by shooting 13 of 23 from the field as the Knicks shot 47.2 per cent overall and overcame missing 22 of 27 three-point tries. The All-Star forward also helped the Knicks survive a late comeback by scoring eight points in the final 4:26.

Elfrid Payton added 20 points and reserve Derrick Rose chipped in 14 to help the Knicks survive a tough shooting night from RJ Barrett. Barrett missed his first eight shots and was held to seven points on two of 11 from the floor.

The Lakers shot 43.8 per cent overall and committed 25 turnovers as they dropped to 5-8 in the 13 games superstars Anthony Davis (strained right calf) and LeBron James (right ankle) have missed this season.

Dennis Schroder paced the Lakers with 21 points and Markieff Morris added 17. Kyle Kuzma chipped in 14 and Kentavious Caldwell-Pope contributed 12 but Andre Drummond was held to three points despite grabbing 10 rebounds. 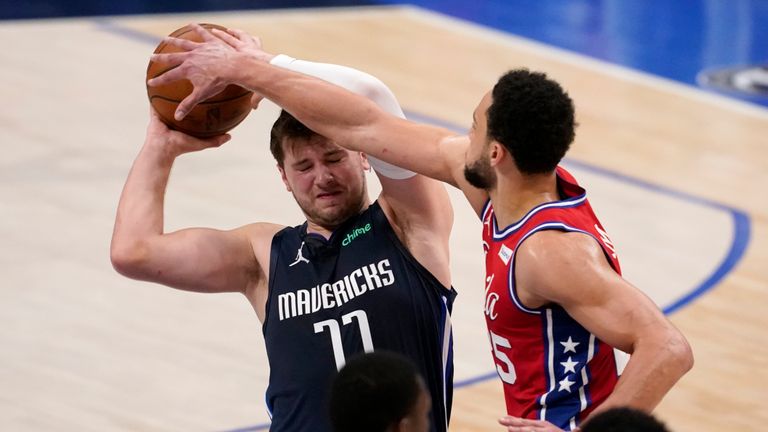 Joel Embiid had 36 points and seven rebounds to lift the Philadelphia 76ers past the Dallas Mavericks 113-95 and send his team back to the top of the Eastern Conference.

Embiid was 10 of 17 from the field and 14 of 15 from the free-throw line in only 26 minutes. Furkan Korkmaz added 20 points in just 18 minutes off the bench while Tobias Harris and Shake Milton contributed 10 each for the Sixers.

Luka Doncic led the Mavericks with 32 points, his 19th game this season with at least 30, while Jalen Brunson added 15. Dorian Finney-Smith scored 12 points and grabbed 11 rebounds.

The Mavericks played without Kristaps Porzingis, who was resting while recovering from a recent knee injury. Dallas fell to 9-10 this season when Porzingis doesn't play.

Embiid carried the Sixers with 23 on their way to a 60-48 advantage at half-time, a lead they extended to 88-69 by the end of the third quarter.

The Sixers continued to control the tempo early in the fourth. Dallas did close within 104-91 when rookie Josh Green threw down a dunk with 3:45 to go, but Dwight Howard responded with a dunk of his own on the Sixers' next possession. Jonas Valanciunas recorded his franchise-record 15th consecutive double-double with 26 points and 14 rebounds to lead the Memphis Grizzlies past the Chicago Bulls 101-90.

The teams committed a combined 37 turnovers after three error-plagued quarters, Memphis having coughed up possession more times midway through the first stanza than they made field goals. The Grizzlies finished with 20 turnovers in total.

The final period took on a different tone. Behind Valanciunas, who scored 10 of his game-high total in the quarter, the Grizzlies seized control.

Chicago's Thaddeus Young (20 points) sank a 10-footer for an 85-85 tie with 4:50 remaining, but Memphis' Grayson Allen responded with one of his four made three-pointers. That began a decisive, 16-4 run punctuated when Valanciunas dunked home his final two points. 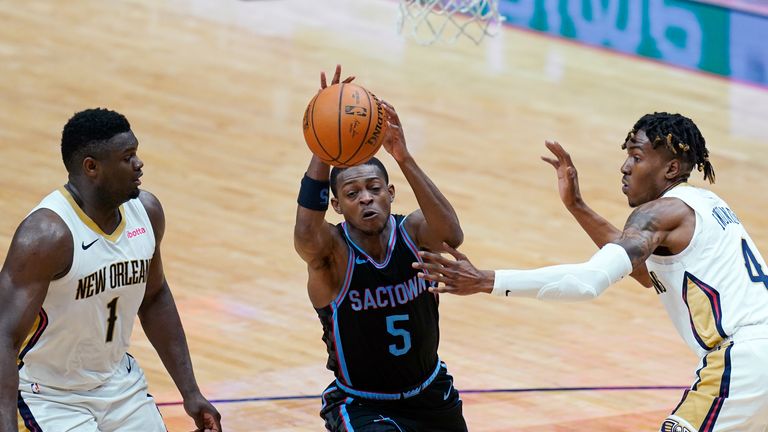 Eric Bledsoe added 13 points and Kira Lewis Jr. and Wes Iwundu had 11 each as the Pelicans won their third straight game.

The Pelicans led by 23 at half-time and withstood repeated second-half charges by Sacramento, who were led by De'Aaron Fox's 43 points. Harrison Barnes had 16 points and 11 rebounds, Maurice Harkless scored 15, and Tyrese Haliburton and Delon Wright scored 12 each for the Kings, who lost their seventh straight.

Fox scored 12 points as the Kings cut their half-time deficit to 74-62 midway through the third quarter. Ingram responded with a three-pointer and New Orleans took an 84-66 on Williamson's layup, before Sacramento scored the final five points to climb within 86-74 at the end of the quarter.

The Kings started the fourth quarter with a 10-5 run as Fox's jumper cut the deficit to 91-84, but Sacramento couldn't get any closer than within four with 18.4 seconds left on the clock. 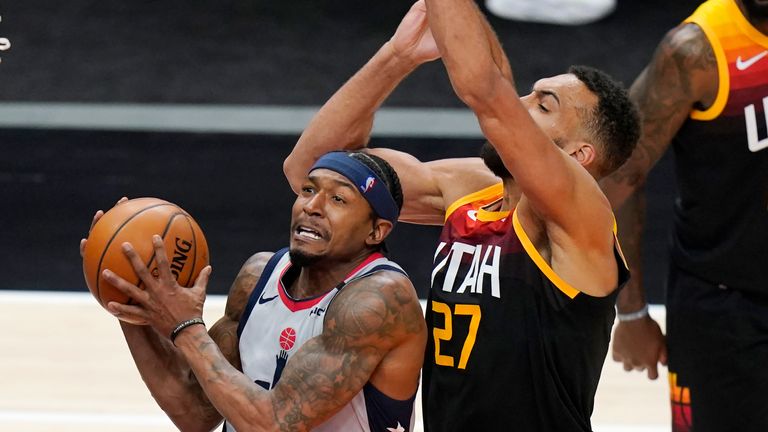 This result snapped the Jazz's franchise-record 24-game home-winning streak and was the first loss for Utah on their court in 2021. The last time an opponent won at Vivint Arena was a Phoenix victory on New Year's Eve 2020.

Westbrook scored 25 points, dished out 14 assists and grabbed 14 rebounds to help the Wizards beat the Jazz for the second time in a month. Utah had won 11 of 13 games overall since falling at Washington in March.

The loss spoiled big scoring nights for the Jazz's Donovan Mitchell, who posted 42 for his fourth straight game with 35 or more, and Bojan Bogdanovic (33 points).

Utah struggled defensively all night and found themselves trailing 70-65 at half-time, a deficit that increased to 109-90 in the fourth. The Jazz eventually pulled within two with 12.3 seconds left but Beal and former Jazz guard Raul Neto each drained two free throws in the final seconds to help the Wizards improve to 3-2 on their six-game road trip that ends Wednesday in Sacramento.

Rudy Gobert added a double-double of 12 points and 12 rebounds, and Joe Ingles was the only other Utah player with double-figure scoring with 18 points. Jae Crowder made a career-high eight three-pointers, fueling the Phoenix Suns' franchise-record 25 made shots beyond the arc in a 126-120 win over the Houston Rockets.

Nine Phoenix players made at least one three-pointer Monday. Crowder, who was eight of nine from long range in the first half, finished eight of 12 before fouling out with 44 seconds left in the fourth quarter.

The Suns built an 81-58 half-time lead behind their record-setting 18-of-24 shooting from beyond the arc in the first half, before seeing their advantage cut to 91-80 with 5.29 left in the third quarter.

Ayton responded to the Rockets getting within five with two baskets in the paint before Booker scored on a fastbreak layup to push the Suns' lead to 120-109 with 4:20 left. Houston, who have lost eight of their last nine, did not come closer than six points afterward. DeMar DeRozan scored 19 points in three quarters of play, and Dejounte Murray added 17 as the San Antonio Spurs rolled to a big lead early and swamped the hapless Orlando Magic 120-97.

The Spurs shrugged off a ragged start, roared to the front with an 18-0 run in the first quarter and never looked back, overwhelming Orlando while building a 28-point lead after three quarters. The win was the second straight for San Antonio, who are now 2-2 on their current five-game road trip that ends Wednesday against Toronto in Tampa.

Derrick White added 15 points for the Spurs, with Rudy Gay and Lonnie Walker IV scoring 12 points each and Drew Eubanks hitting for 10 points. Keldon Johnson had 11 rebounds and Eubanks pulled down 10.

RJ Hampton led the Magic with 16 points while Wendell Carter Jr had 15, Dwayne Bacon scored 14 and Cole Anthony added 12. Orlando has lost six consecutive games, including all four on the homestand that ended Monday.

DeRozan's bucket with 5.5 seconds left secured a 60-37 lead at half-time, the Spurs' largest of the half, before San Antonio coasted to victory over the final two stanzas.