NBA's Chief Diversity and Inclusion Officer Oris Stuart says the murder of George Floyd 'triggered a deep and passionate response' across the league, and has guaranteed a continued commitment to fighting for social justice. 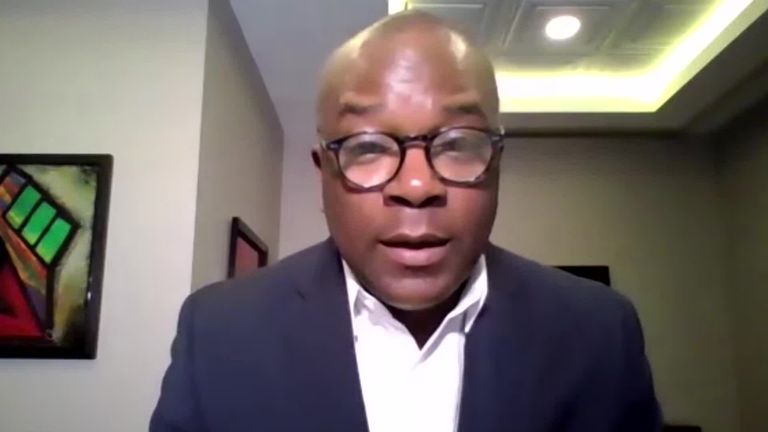 NBA Chief Diversity and Inclusion Officer Oris Stuart discusses the response from the league to the murder of George Floyd.

The NBA positioned itself at the forefront of the calls for change in 2020 as the death of Floyd, an unarmed black man killed while being restrained by former Minneapolis police officer Derek Chauvin, triggered anguish and wide-spread protests across the world last May.

Chauvin was recently convicted of second-degree unintentional murder, third-degree murder and second-degree manslaughter by a jury after bystander footage had captured him kneeling on Floyd's neck for over nine minutes outside a local convenience store.

Teams across the league participated in peaceful protests in their local communities demanding police reform, while the NBA bubble near Orlando saw courts printed with the words 'Black Lives Matter' and players permitted to wear t-shirts bearing social justice messages.

"I would say immediately coming out of that experience, our entire community, our entire eco-system was mobilised," Stuart told Sky Sports. "You certainly saw responses publicly by our players, our coaches, expressions of sadness and anger and frustration. Certainly our players were triggered and I personally was, like so many people associated with our league. The NBA reflects on a year since the murder of George Floyd.

"I would say that immediate reaction led to conversations that I've never been a party to or experienced. I would say the NBA has long been supportive and engaged in these conversations but that moment created a very unique and new reality.

The police shooting of 29-yard-old black man Jacob Blake in Wisconsin in August 2020 prompted further unrest across the United States, with both the NBA and WNBA among the professional sports leagues to boycott games in protest.

At the same time, the league was faced with the task of organising its new season amid the coronavirus pandemic.

"We formed a social justice task force to take a deep look at what are those things we are uniquely positioned to do, not the things that any cooperation can do, but what was it we the NBA could do to really make a meaningful contribution to this global movement," continued Stuart.

"And then of course through the summer those commitments started to take action and take root, but also we were in planning conversations with the Players Association about our restart. Of course we were in the middle of a pandemic so we were planning how to bring the season back to life. The league's social justice coalition would set out to increase access to voting, promote "civic engagement" and advocate for "meaningful police and criminal justice reform".

Teams that owned the venues in their respective cities were subsequently allowed to serve as polling stations in order to make for easier access to voting ahead of the presidential election.

"This moment that we all experienced together just triggered a deep and passionate response, so I'm not surprised our players, who in their own lives and families had similar experiences, saw this as an opportunity to truly use their voices and our combined platform to make a difference," added Stuart.

"I am appreciative of the amount of focus and amount of effort that has been ongoing and I guarantee from what I've seen and what we're doing it will be sustained. What the NBA wants to do and who we want to be is an example of inclusion, an example of fairness and equity and respect."

"The folks that are associated with our league or follow our league or love the game really see it as an opportunity to bring people together to bridge differences, to allow us to focus on commonalities and then together to face the real challenges we all have.

"If we can be a force for that and if we can serve some good in that respect then I think we're doing right by the world and by the game. That's how I see the future playing out."

The coalition recently published a statement calling on the US Senate to pass the George Floyd Justice in Policing Act, which proposes a ban on chokeholds and "qualified immunity" for law enforcement, as well as creating national standards for policing.

It recognises what Washington Mystics forward Elena Delle Donne deems a primary goal when it comes to addressing systemic racism.

"The one thing we speak of often is police reform and it just has to change," the two-time WNBA MVP told Sky Sports. "The way that we're doing it here in America isn't working so that's probably number one.

"And then just continuing to get out into our communities and also being there to inspire the young ones who are looking towards us to not just help make for better communities but to be there with them and to motivate them and to make this a better world for them as they continue to grow.

"I think obviously a lot has been done but there is so much more to do and we can never be complacent in where we are and we need to continue to move forward and to demand change and demand justice.

"I think that's something that is so great about the W as players, yes we feel like we've done a lot and the collective has done a lot but there is so much more to do and we're always looking to better the community."

The NBA's determined efforts have coincided outstandingly with those of the WNBA, notably in August last year when players supported the opponent of then-Atlanta Dream co-owner and Georgia senator Kelly Loeffler, who had outlined her opposition to the Black Lives Matter movement.

Like their male counterparts, many took part in peaceful marches and wore t-shirts with social justice messages. On this season's Mystics jerseys is printed the word 'RISE', designed to champion inclusion and the pursuit of equality and justice.

"For us the 'rise' is just rising to the occasion and rising for those who might not have a voice in this situation and being that voice and standing up for what we believe in and being a voice for the voiceless," said Delle Donne.

"We're in DC and in a place where a lot of decisions are made so we have a lot of team discussions and we know the importance of where we are and what change we can make."