In the video below, Sky Sports F1 examines how Formula 1 has changed since the murder of George Floyd and what the next steps are to improve diversity in the sport 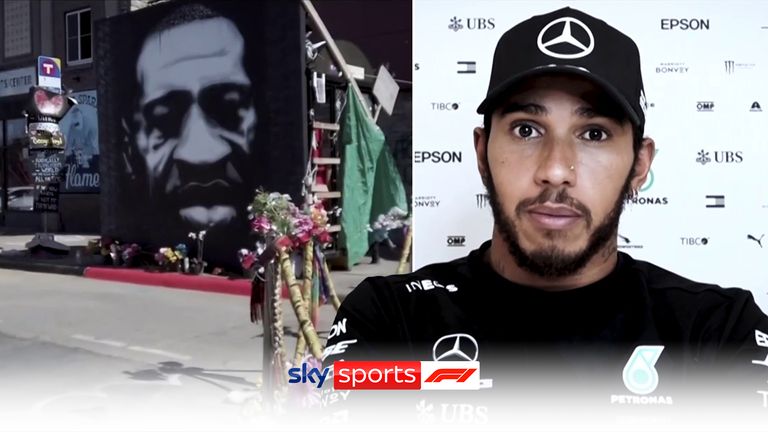 Lewis Hamilton has said George Floyd's "legacy will last forever" and that work will continue to drive lasting change in the fight for racial equality.

As the world marks the one-year anniversary of Floyd's murder, Hamilton has posted his own reflections on the events of the past year.

The seven-time Formula 1 world champion has been a leading voice in calling for an end to racial injustice and for the creation of a more inclusive society.

Driving the debate within his own industry to ensure lasting change, the Mercedes driver last year set up his own research project - The Hamilton Commission - to understand the barriers to entry to motorsport from under-represented backgrounds.

On his social media channels on Tuesday, Hamilton posted:

Asking "how can we achieve real justice for him, the many lives stolen before and after his", Hamilton said work to drive lasting change would continue in the memory of Floyd.

"We never forget. We continue our work," said Hamilton. "We believe in a world where children like George's don't have to worry about whether their dad will come home at night.

"Where every black person can walk down the street with the belief that this world was made for them. We work to build an equal world for George, for his children, and for all the other victims of racism.

"Rest in peace, George Floyd. Your time here was cut far too short. Your legacy will last forever."

Speaking to Sky Sports F1 at the Monaco GP, Hamilton said his Commission was now in the closing stages of its research before presenting its findings and recommendations.

"I'm really excited," said Hamilton. "It's just coming to the closing end of the research.

"I just had one of the last calls with the Commission last week."

One year on: How has F1 changed since the death of George Floyd?

Watch Sky Sports F1's feature in the video at the top of the page as figures from across the sport, including Hamilton, Sebastian Vettel and Daniel Ricciardo, and F1's leadership discuss what has changed so far to create a more diverse culture and what the next steps are.

Since the death of George Floyd, F1 has taken an active role in combating racism and promoting inclusivity - helped by the grid of drivers, teams and particularly record-breaking star Lewis Hamilton.

Hamilton, the sport's first and only black driver, has long been a campaigner against racism but accelerated his stance after the death of Floyd, something he said "brought back a lot of emotion I had suppressed since the age of five".

Hamilton, a prominent supporter of the Black Lives Matter movement, initially criticised F1 for its "silence" and lack of action - but the sport soon set up a We Race As One initiative and its own taskforce focused on increasing diversity and tackling inequality.

"The impact of George Floyd's death was one where I think a lot of people internally felt we now need to speak up," said Yath Gangakumaran, F1 Director of Strategy and Business Development.

"We've historically tried to stay out of non-sporting matters, but we felt it was right to make the decision to use our platform and our voice to talk about these issues around racial injustice."

Mercedes, Hamilton's team, also showed their support - revealing a new black livery to replace their usual silver from the start of the 2020 season.

With other teams displaying their own messages on cars, the anti-racism stance was therefore strong for that opening race in Austria, and drivers were also handed the opportunity to show unity in the fight against racism by taking a knee before the pre-race national anthem.

Not all drivers did take a knee, however, while the setup also often looked rushed. By Race Four at Silverstone, a new anti-racism video from all the drivers was revealed, while drivers were also afforded more time to show unity together at the front of the grid before the race.

While these actions were much-needed, there was still, understandably, a call for change and progress rather than just gestures. More had to be done.

And more has been done. Last July, Hamilton set up his own Hamilton Commission. In partnership with the Royal Academy of Engineering, it is a research project that is working to identify the key barriers to recruitment and progression of black people in motorsport, and providing recommendations to overcome them.

F1 has also been working together with the Hamilton Commission, and has its own plans.

"We will be announcing, in the next month or so, specific job opportunities for people from under-represented backgrounds," said Gangakumaran.

"Within the teams themselves, we are working collectively within the diversion inclusion taskforce to see how we go to market and hire talented people. We're also going to be announcing engineering scholarships that we are going to fund.

"Not only will we fund their time at university, we're also going to give them work experience at the teams."

Teams are also doing their bit to ensure F1 is a more diverse and inclusive sport, with several long-term diversity programmes. As an example, Mercedes have launched their Accelerate 25 programme, aiming for 25 per cent of their new recruits to come from under-represented groups until the end of 2025.

"Already here you're seeing more people of colour all of a sudden starting to appear," said Hamilton.

Sebastian Vettel, the four-time F1 world champion who has also been a vocal supporter of Hamilton and equality, added: "I think it's a work in progress. It's up to all of us to translate that awareness into action."

Systemic change takes a long time, and F1 has a long way to go. But it is certainly making steps to become a more inclusive and diverse sport.