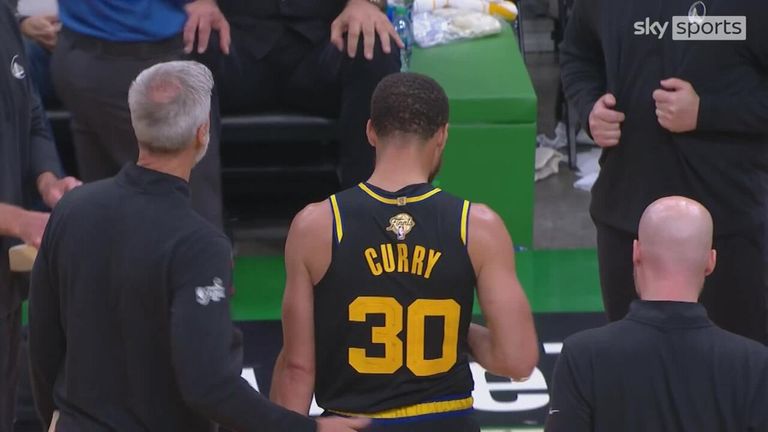 Stephen Curry was forced off with an apparent leg injury, in the last three minutes of the fourth quarter in Game 3 of the NBA Finals

Stephen Curry was left limping after a massive melee on the floor in the final quarter of Game 3 of the NBA Finals at TD Garden.

The Golden State Warriors were beaten 116-100 by a Boston Celtics team inspired by making their NBA Finals debut on their home floor, to fall behind 2-1 in the best-of-seven series ahead of Game 4 live on Sky Sports Arena & Main Event on Friday night.

On an evening where the hosts undoubtedly won the hustle battle, bodies ended up scattered across the parquet floor as numerous players dived for a loose ball late in Wednesday's clash. Golden State's Stephen Curry emerged from the pile limping after feeling the full weight of Al Horford landing on him. Draymond Green came out of it with his sixth foul after becoming incensed the refs let the scrum carry on for that length of time.

The Warriors' last chance at pulling out a comeback victory ended there, with three-and-a-half minutes left during a scramble which, like the game, went Boston's way. Marcus Smart emerged with the ball, and the Celtics held on to win.

Golden State trailed by as many as 18 points in the first half, but it was a 12-point Boston lead with about four minutes left when Jayson Tatum missed an 18-footer. The rebound was batted around and three Celtics and two Warriors went to the floor trying to secure the basketball.

The focus was Curry who, when the players were separated, remained on the floor wincing in pain. Klay Thompson, who had his best performance of the series so far with 25 points, put it bluntly with regards to how vital Curry is to the Warriors.

"We need him if we want to win this thing," said Thompson. "And I know Steph will do everything he can in his power to play. I'm really hoping he's okay because he is our identity and without him, it will be very difficult." 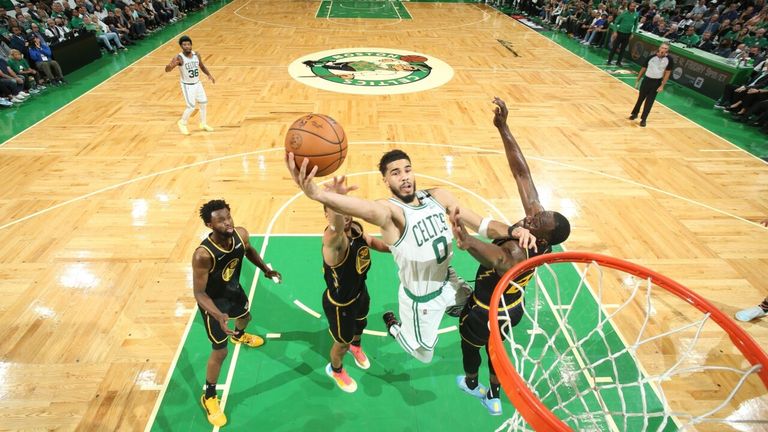 Celtics center Horford rolled up on Curry's leg during the scrum – a play reminiscent of the one in the regular-season meeting between the teams in March, when Smart rolled over Curry's ankle in a play that Warriors coach Steve Kerr criticised as "dangerous."

The struggle on Wednesday night ended with Green fouling out of the game. He shouted at the referee while Curry remained on the floor.

"You're always worried," Green said, when asked if he was concerned about Curry's wellbeing. "I saw him getting dove on. And that was about that. I picked up my foul pushing them off of him because he's screaming at the bottom of the pile. So yeah, it is what it is. I'll take the foul to get him off his legs."

Curry remained in the game but after the teams traded baskets to leave Boston ahead by 14 points, Kerr emptied his bench.

Green was credited with getting the Warriors back in the series with that Game 2 at home. He came back with nine points, seven assists, five rebounds, a technical foul to set the tone in Golden State's victory.

But he finished with just two points on Wednesday, along with the six fouls and was not a major factor.

The big storylines heading into Game 4 will be whether the Warriors can bounce back once again, and how Curry's health will hold up.

Curry himself, believes the injury to be a right foot sprain, based on how it feels to him initially.

"That's what it felt like and now we'll see how it responds," Curry said. "Not much other [than that] to say. I don't feel like I'll miss a game, though. So take advantage of these next 48 hours to get ready.

"Obviously, [there will] be some pain, but I'll figure how it feels tomorrow and get ready for Friday. It's the same thing I did against Boston regular season, but not as bad.

"He's a big body obviously, I haven't seen the play. I don't know if it could have been avoided or not. But I was in that situation with Marcus back in the [Bay area]. And you just want to get your foot out of there. That was all I was trying to try to do at that point, knowing the position I was in, but like I said, from what I feel like it's not as bad."

Curry and the Warriors will certainly be hoping he is right. Without him firing on all cylinders, you struggle to see a way that Golden State can get it done against a very talented and adaptable Celtics unit.

Watch the NBA Finals exclusively on Sky Sports - see the list of games here and subscribe to watch the live action.