US President Joe Biden confirmed Brittney Griner was on a plane heading back to America having been released by a Russian prison in a prisoner swap for arms dealer Viktor Bout. 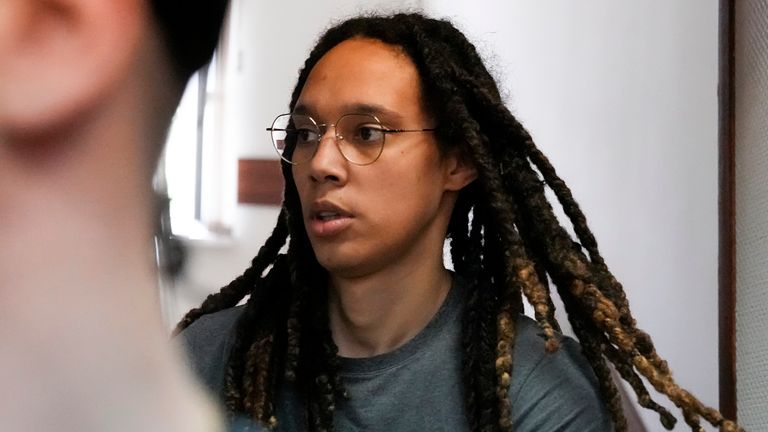 US basketball star Brittney Griner has been freed in a prisoner swap with notorious Russian arms dealer, Viktor Bout.

US basketball star Brittney Griner has been released in a prisoner swap with Russia and is now in US custody, President Joe Biden said on Thursday.

Biden and Vice President Kamala Harris spoke by phone with Griner from the Oval Office, a US official said, adding that the call included Griner's wife, Cherelle.

"She's safe, she's on a plane, she's on her way home," Biden said from the White House, where he was accompanied by Cherelle and administration officials.

President Biden said Ms Griner had been held under "intolerable circumstances" and been through a "terrible ordeal".

"I'm glad to be able to say that Britney is in good spirits. She's relieved to finally be heading home."

Ms Griner "represents the best of America", he added.

She will be flown to a medical facility in San Antonio, Texas, where she will also meet her wife.

Griner was detained in Russia in February after customs agents discovered vape canisters consisting of cannabis oil in her luggage at Moscow's Sheremetyevo Airport.

The 32-year-old, a two-time Olympic gold medallist, was later sentenced to nine years in prison on charges of possessing and smuggling drugs after pleading guilty but insisting she had made an "honest mistake" and not intended to break the law.

Ms Griner's wife Cherelle said she was "overwhelmed with emotions" after going through "one of the darkest moments of my life".

"So today my family is whole, but as you all are aware, there's so many other families who are not whole."

WNBA Commissioner Cathy Engelbert, who admitted to being very emotional when she heard the news. "BG has shown extraordinary courage and dignity in the face of enormous adversity."

While it's unclear right now if Griner wants to ever play basketball again, she would be welcomed back with open arms by both the WNBA and USA Basketball. The WNBA season begins May 19.

Engelbert said she'd give Griner and her family some space and time before any discussion about her return to the league. "It's been a long, horrible ordeal and we really look forward to her return and hearing her voice," Engelbert said.

Bout, nicknamed "the merchant of death", was one of the world's most wanted men prior to his arrest as a notorious arms dealer who sold weapons to rogue states, rebel groups and murderous warlords in Africa, Asia and South America.

"On December 8, 2022, the procedure for the exchange of Russian citizen Viktor Bout for U.S. citizen Brittney Griner, who were serving their sentences in correctional institutions of the United States of America and the Russian Federation, respectively, was successfully completed at Abu Dhabi Airport," Russia's foreign ministry said.

"Washington categorically refused to engage in dialogue on the inclusion of the Russian in the exchange scheme," the foreign ministry added. "Nevertheless, the Russian Federation continued to actively work to rescue our compatriot.

"The Russian citizen has been returned to his homeland."

Staley, who led the United States to gold at the Tokyo Games and was assistant coach in 2016, was among those calling for Griner's release after she was first detained in February and urged critics to show empathy for Griner's family and friends.

U.S. Republican lawmakers have been critical of the deal in exchange for Russian citizen Viktor Bout, a former arms dealer, as it leaves behind Paul Whelan, a former United States Marine who is serving 16 years on espionage charges, which he denies.

Staley, a Basketball Hall of Famer who is head coach of the South Carolina women's collegiate team, said the basketball community would continue to advocate for Americans wrongfully detained in Russia and elsewhere.

"We thought Brittney's star power would probably bring, you know, her and someone else home - and that just didn't happen. But you got to take the deal that's on the table to bring one of us home."

Staley watched Griner grow from a first overall WNBA draft pick in 2013 to one of the dominant forces in the league and an American superstar who collected two World Cup golds on top of her Olympic titles.

"It's been hard," Staley said. "I hope she felt lifted, lifted in prayer, lifted in friendship, lifted in our basketball community.

"She's always been a great teammate. Very professional, very cordial, incredibly funny. And she's just been great to be around."