Australia take on England in latest instalment of Quad Series

Jo Harten to miss out as she rests a knock suffered in record-breaking victory over New Zealand; watch live on Sky Sports Action or Main Event from 10.30am on Wednesday

By Paul Prenderville with Tamsin Greenway

England face Australia in the latest round of Quad Series action on Wednesday, live on Sky Sports Action from 10.30am, and Tamsin Greenway has picked out the key areas where the game will be won and lost.

Tracey Neville's Roses squad are chasing a first Quad Series title but will have to beat the world's no 1 ranked team if they are to stay on course.

England started fast with a record-breaking 52-39 win over New Zealand on Saturday, while the Aussie Diamonds were too strong for South Africa.

A much-improved New Zealand defeated South Africa on Tuesday morning, running out 61-37 winners in Tauranga, but attention now switches to Newcastle where the Roses and Diamonds face off in a repeat of their Commonwealth Games final that saw England win their first-ever gold medal.

It's set up a huge encounter on Wednesday - live on Sky Sports Action and Main Event from 10.30am - that could decide who ends up winning the tournament on Sunday, and Tamsin Greenway has looked at where the game will be decided. 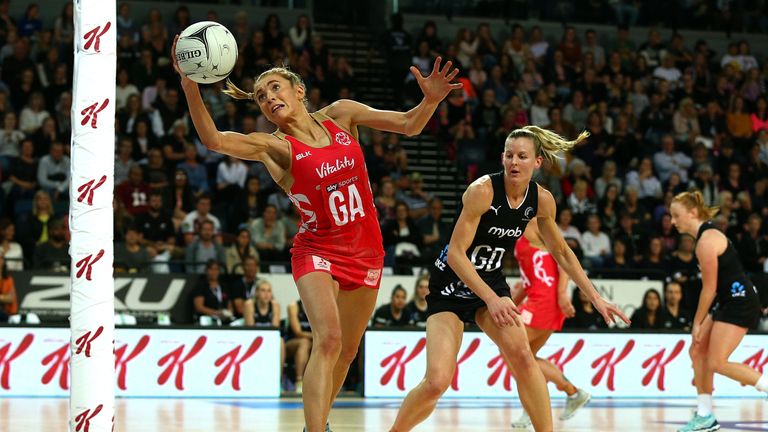 If England get stuck in during the first 5/10 minutes we might see a very different Australia side to the first game.

England winning now puts doubt in the Australian minds - for years, and I mean years and years, we would play them knowing we would probably lose.

It was also an 'experience' thing, or a 'learning' thing. The last five years has definitely changed as we began to believe we could beat them - but then had to be doing it regularly and in big competitions.

That is not in people's heads any more. The England players are still floating around on air and they have been playing the best netball of their careers, at the top of their league and in the best league in the world in Australia.

They won't be going into the game with any doubt that they are going to lose.

Both teams improved and had much better second halves and that was after both coaches made some changes at half-time, so I am intrigued to see whether they stick with their starting line-up or feel their second-half ones give them a better chance.

Jo Harten is a big loss, but Helen Housby was outstanding and is now number one on the teamsheet. She is playing the best netball in the world at the moment. That could bring in Kadeen but it will be a big change for England.

One of the keys for the Roses is that they have had two shooters in the circle, looking around the other teams that isn't always the case. New Zealand on Tuesday morning had Maria (Folau) as the heavy shooter.

If you watched the first quarter, they were a little bit dodgy - they were not confident, they were scrappy and if they had played New Zealand or England, I think they would have been in trouble.

However, they battled through, their second half was much more solid, with a bit more flow to it.

The key for me is this head to head. The last few games, Geva has had the better of Caitlin, and I think it leaves Australia without a Plan B.

Geva knows Bassett and Steph Wood inside out after playing with them at Lightning and she looked very solid with Layla Guscoth, who had such a good game against New Zealand.

If Mentor can win the battle and Australia are forced to take Bassett off as they have done in the past, I don't think the Aussies will have an answer to it.