Jess Thirlby's outfit prevailed 60-51 at the Motorpoint Arena in Nottingham and now face two further matches against the She Cranes at London's Copper Box Arena this weekend; watch the second Test live on Sky Sports Arena from 3.30pm on Saturday 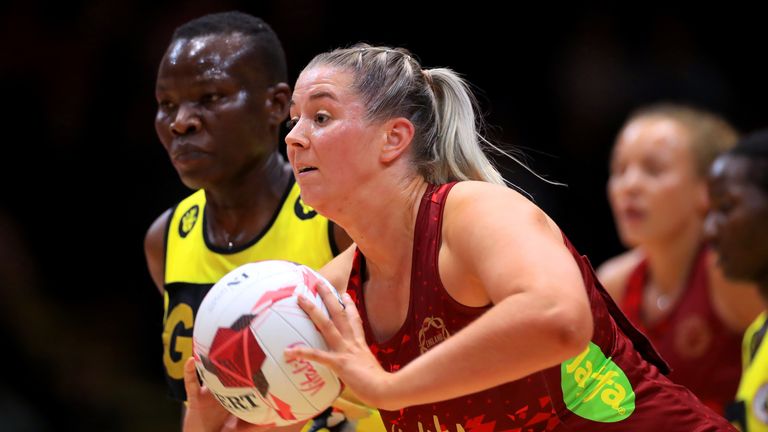 England's Vitality Roses opened their three-Test series against Uganda's She Cranes with a determined performance and a 60-51 victory in Nottingham.

Jess Thirlby's outfit were playing for the first time since this summer's Commonwealth Games and a poor second quarter meant they trailed by 28-25 at half-time.

England's head coach then put her faith in a number of international debutants including Funmi Fadoju and Olivia Tchine to claw the match back. A purposeful second half in attack and defence eventually took the game away from the She Cranes.

The second and third Tests take place on Saturday and Sunday at the Copper Box Arena in London and will be shown live on Sky Sports.

"It feels amazing to get out there again on a home court in front of our home crowd," Eleanor Cardwell, player of the match, said.

"I'm so, so happy for all of the girls who got their first caps, it means so much to them and to the rest of the team. It just lifts everyone so I'm super proud of the performances each and every one of them put out.

"The crowd got behind us and we could feel that momentum from them, a huge thank you to them for that. The weekend will have two good games down in London. I can't wait to be at the Copper Box again, it's always great to be there."

With a Netball World Cup on the horizon next year, Thirlby has selected a squad for this Uganda series that contains some of England's most promising fresh talents. Shooter Cardwell was the only member of the starting seven who had faced the She Cranes at the Commonwealth Games earlier this year.

Uganda arrived in England with just nine players available to them due to visa issues and as a result, head coach Fred Mugerwa had to move shooter Proscovia Peace back to goal keeper.

The Roses accelerated 5-1 up as both Cardwell and Sophie Drakeford-Lewis were found well by Allison and Hannah Joseph before the She Cranes reeled them back in.

England restored their lead through excellent defensive work from Fran Williams and Cardwell's dominance in the shooting circle. The home side held a 16-11 advantage at quarter time.

The second quarter saw Uganda step up and England drop off defensively right through the court. Magaret Baagala and Irene Eyaru were able to calmly feed Cholhok while England's work in their goal third was error-strewn.

Cardwell wasn't found easily and the cohesion England's attackers had enjoyed during the first half wasn't anywhere to be seen. As a result, England lost the quarter by 17-9 and went into the second half three goals down.

England head coach Thirlby made almost wholesale changes for the third quarter and decided to ask her younger players to step up.

Funmi Faodju arrived at goal keeper for her much-anticipated debut and her London Pulse team-mate Olivia Tchine did the same at goal shooter.

In the middle, co-captains Malcolm and Allison switched positions, Chelsea Pitman arrived at wing attack and Cardwell moved out to goal attack.

England instantly looked more settled in their attacking goal third, Tchine missed her first attempt at goal but then settled superbly and was accurate under pressure.

In defence, Williams set the tone in terms of work rate, Fadoju complemented her well and England's intensity and timing through court was restored.

The Roses' all-court work allowed them to pull their tiring opponents back in; first-look feeds from Pitman continued their surge forwards and Cardwell didn't miss an attempt at goal.

Before the third quarter was out, Zara Everitt arrived for her international debut at wing defence and the Roses closed the quarter out well to lead 42-37 with 15 minutes to go.

The final 15 minutes saw fatigue set in for Uganda while England stayed focused and clinical to strengthen their advantage and end the first of their three Tests on a high.