Watch Mary Cholhok in the new series of My Icon, showing on Monday at 6.15pm on Sky Sports Mix (Sky channel 121). All episodes of My Icon are available On Demand

Mary Cholhok is the young mother who had to lie to her family just to play netball, but since moving to the UK in January 2019, the 6ft 7in former World University MVP is starring for Loughborough Lightning having taken the Vitality Superleague by storm with a string of electric performances.

At just 21-years-old, Cholhok has dealt with more challenges than most will face in a lifetime. After her father passed away when she was young, her family were forced to leave their home in Sudan and migrate to Uganda to escape civil war.

Her passion for netball began when she started high school and she can still recall the first time she played on the court.

"The first week of starting school, there was this sports hour for every student, you could just go there and play; even if you didn't know the game," she told the latest series of My Icon.

"I was just passing the ball, and the coach was like 'Why don't you come tomorrow?' - I didn't even know the name of the game! "The next evening, I came out to try, to practice more of the stepping and other stuff for like a week. I was catching up pretty well, it was easy, and I found it interesting.

"In two weeks, they were having matches and they suggested I go with them. I had to start the game as I was the only shooter there, and in my first game we won! That was so easy for me and I was like I'm not stopping this because it sounds good and fun."

Being a young girl interested in playing sport was, and still is, difficult in Uganda. Cholhok knows more than most the challenges young girls face in more conservative African countries.

"There are big challenges to being a girl child playing sport back in Africa," she said. "Girls in some countries, or some tradition they believe girls are some kind of wealth, they should be handled with care. 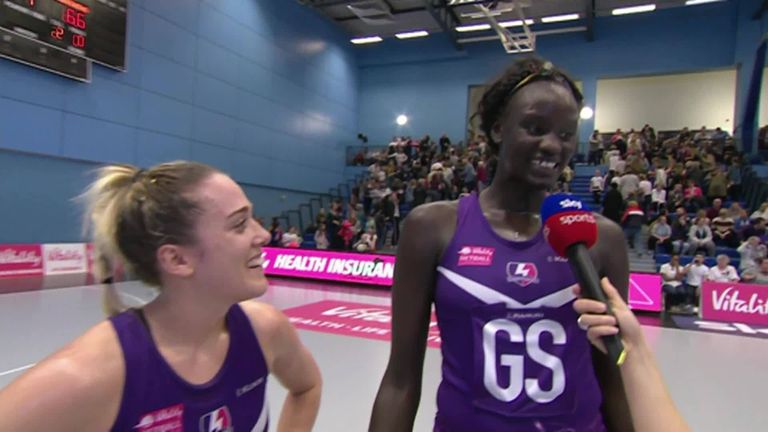 "And when you have the height, the beauty, that's wealth."

Despite her obvious natural talent, Cholhok's family did not react positively to her budding netball career and she often lied to her mother to ensure she could train.

"I just wanted them to allow me to play. I didn't want to sneak out to play something that I loved, but I would just leave my sneakers there and I would get anything to train in.

"They thought once I would get through High School, that would just be netball done. That's what they thought. And that's what I thought too."

With university ambitions on the horizon, and only six months to go until her High School exams, Cholhok's world was turned upside down when she found out she was pregnant.

Her budding netball career was sacrificed as the pressure of pregnancy told on the then 18-year-old and unsurprisingly netball took a back seat.

"When I got pregnant at the end, that was really tough, I didn't play netball for almost a year, I think two years. I think in everything you do, you should know what will happen after that. I'm very stubborn, and sometimes I do what I think is right so that gives me the confidence that I always doing the right thing."

A year after giving birth to a son, the power of netball offered Cholhok a lifeline. Against the wishes of her family, Cholhok applied to Nkumba University in Uganda with ambitions to continue her education.

Initially the university refused to offer a bursary, meaning Cholhok had to find the fees on her own.

Although she did manage to raise half the amount needed, it still wasn't enough but a positive turn of events, saw the University netball team in need of a goal shooter, and they had eyes for Cholhok.

"The University team needed me, so I said you have to agree that you have to pay half of my fees, and also my accommodation should be paid, and they said "OK". Since they needed me they agreed and that was the power of netball."

Post-university, 2018 saw Cholhok called up the Uganda national team to play in the African Championships, as well as the recent Quad Series against England which paved the way for her move to Lightning.

Having signed back in December, there was a lot of pressure around the She-Cranes international, not least because she had huge footsteps to fill in the shape of fellow goal shooter and Ugandan icon Peace Proscovia.

After starring for Lightning over the last few years, Proscovia moved to play for Australian franchise Sunshine Coast Lightning at the start of the 2019 season, but her influence on Cholhok is obvious.

"She was a friend to me, like I got just closer because I just wanted to know her," she said.

"There is some story she told me that almost collides with my story, and she didn't stop moving because of the challenges she had and it was the netball that gave her hope. That's almost my story, and when I bring that up she really inspires me, and she encourages me.

"If she didn't give me confidence I don't think I would be here. She's really supportive."

To her frustration It took until deadline day for Cholhok to receive her VISA, a prolonged process that meant a late link-up with her team and difficult time as she waited for the green light to take the next step.

"It was really quite tough because when I came for the test series in November, I was told that I was packing everything and that I was going to just stay here instead of going back. That was great, that was making everything sure."

"But then after me coming here [to the UK], they told me I have to go back to apply for the VISA, back in Uganda."

With the paperwork sorted and the netball world now at her feet, Cholhok is quick to underline the hope netball has given her and her family.

"People will say maybe netball was just a waste of time, that is people who don't know it. When you represent a country maybe the UK, Australia, you say "Wow these guys are travelling!" So they get to go to the games and sit and watch and that's really good.

"It changes their [Cholhok's family] minds about everything. You don't judge something before you know what it does for the other person."

Don't miss the My Icon Sportswomen special, starting on Monday on Sky Sports Mix - the whole series will also be available On Demand, as are all the episodes from previous series.