Dan Ryan has highlighted his ambition to create a "first-class high-performance programme" at Leeds Rhinos Netball and one that rivals the strongest in the Vitality Netball Superleague competition.

Leeds Rhinos will join the Superleague from the 2021 season and the whole of the sporting franchise are passionate about re-introducing top-flight netball back into Yorkshire with a bang.

Ryan will work extremely closely with their director of netball Anna Carter and the highly experienced coach is absolutely thrilled at being a part of such an ambitious franchise in England.

"I see netball in the UK as the land of opportunity and it was one of the reasons why I wanted to come back and stay a little longer," he said

"Obviously, I had a very challenging time working in Suncorp with the Adelaide Thunderbirds. But I tell you what, I learnt an incredible amount as to what true high-performance is, the importance of having adequate resources and the support you need around you to be successful.

"That's why I'm so excited about this opportunity and because we have some great resources available to us, it allows us to dream big and really go for it, and as a coach, it fills you with a lot of confidence which is important."

Originally Leeds Rhinos Netball were aiming to gain a Superleague license for the 2020 season, which didn't happen. After their initial disappointment, Carter and now Ryan, are grateful for the lead-time that a 2021 entry provides them.

"I know that from a coaching point of view, when you take on a new role and quickly hit the recruitment phase, everything is so rushed and you often end up scrambling to get everything sorted," Ryan said.

"So, it's quite a luxury for us to have time to strategically set things up properly and professionally and to do things really well." 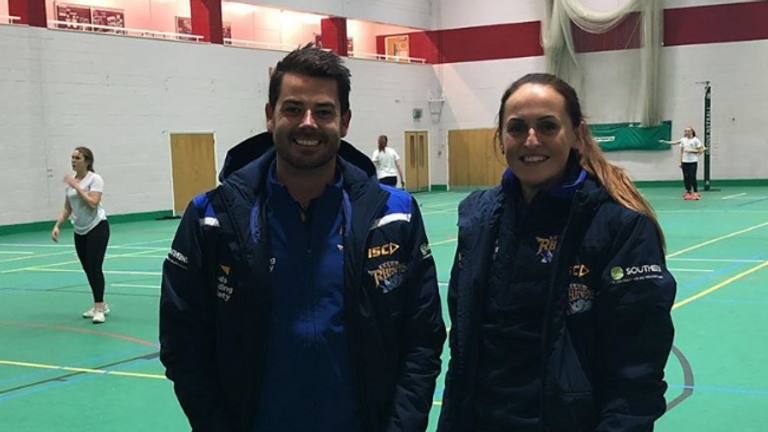 Our ambition here is to create the best high-performance programme and environment that an aspiring athlete from the region, from around the UK or even internationally wants to come and be a part of. I want to build something that is truly elite and that produces strong results consistently.

With the greatest of respect to all of the other netball leagues in the world, Australia's professional league sets standard for netball and is a league that Ryan has been immersed throughout his life.

"I think we do have the resourcing and ability to replicate a Super Netball franchise to some capacity [at Leeds Rhinos Netball]. Of course the level of investment in Australia is far greater, but if we can be creative with what we have, it will allow us to start off on the right foot.

"For me, I want to ensure that the athletes have everything that they need at their disposal to be the very best version of themselves on and off the court. We intend to be really holistic in our approach and this is very much in line with what the overall Rhinos club values greatly."

For Ryan, the work at Leeds Rhinos has already started and will continue at pace as the months tick down towards their Superleague entry. As a region, Yorkshire has created a wealth of talented netballers over the years and the head coach is eager to see them return.

"One of the things that I've had some really good discussions with Anna around is what the inaugural Leeds Rhinos Superleague team will look like and for us, it's so important that it has a really clear identity," he said.

"For me an identity has to come from the ground in which the team is born on. One of our aims will be to hopefully have some Yorkshire flavour within the group to come capacity.

"Hopefully those players who have been through the system and the Pathway, and who have gone away to gain experiences elsewhere, have an opportunity to come home if it's what they want to do.

"That said, we will certainly be casting our recruitment net far and wide and not closing off our ambition to be able to offer an athlete from any other part of the UK or abroad an opportunity at Rhinos."

Sky Sports looks at the ever-growing links between rugby and netball as asks the question if rugby tie-ups are netball's future?

One of Leeds Rhinos Netball's unique points, which is also the case at Wasps Netball and at Saracens Mavericks, is the fact that they are a part of a larger sporting club.

As a result of this, comes the ability to learn from other elite athletes, gain expertise from other functions and perhaps also, the chance for potential personnel crossovers.

Also as a sporting franchise, Leeds Rhinos are extremely focused upon shaping the community around them and giving back to the region. Ryan is very clear that for his athletes, it won't just be about what happens on court.

"Being part of a successful sporting brand like Leeds Rhinos comes with great responsibility and that requires all involved to understand and appreciate that it's bigger than sport," he shared.

"I want to build a team that is willing to invest in the local community, inspire the next generation and give back

"It's something Leeds Rhinos rugby does with distinction and it's something that as a netball department we are committed to making a positive impact to as well."

What is abundantly clear from Ryan's words is his passion and ambition to make Leeds Rhinos Netball one of the finest franchises in England. The franchise will not be arriving into the 2021 season just to make up the numbers, far from it, they're looking to thrive and to set the standards for netball in England.