"Everyone says it’s like a dream come true, but I think for us it felt like a part of history"

One second and one goal can change things forever and in April 2018, that goal belonged to England's Vitality Roses. Tracey Neville, who led England to victory in Australia, believes their Commonwealth Games gold was not just a dream being realised but it was a "part of history".

As Helen Housby's match-winning penalty pass or shot swished through the net, there was a state of euphoria on court and that was matched by fans 10,000 miles away.

Across the country in England, thousands of people forgot about the fact it was the early hours of the morning and roared at the tops of their voices to hail a first netball gold.

Back courtside on the Gold Coast, Neville took it all in from the bench and shared the feeling so many athletes and coaches experience after achieving substantial success.

"When it went in, there was a huge wave of emotion and relief," Neville told Sky Sports.

"As soon as Helen had the ball in her hands, I knew that she wouldn't miss. Helen had shot one of those for me before in the Superleague.

"I just remember that night there was a relief that it was all over. Is that really bad to say?

"I remember going out with the players that evening. You think that you're going to have the wildest night of your life, I thought I was pregnant at the time so I couldn't, but I remember looking around at them and they were absolutely knackered."

With the intensity of the schedule at the Commonwealth Games, seven matches in 10 days, and with emotional toil that comes with winner-takes-all knockout matches, it is no wonder they all felt that way.

The semi-final and final were on consecutive days and Neville recalls the mood in camp on that history-making weekend in April.

"I actually thought that we look more tired before the semi-final," she said.

"The night after that one-goal win over the Sunshine Girls [Jamaica] none of us had much sleep. The players had been recovering and all of us has struggled, even though we knew that the final was the day after.

"Despite that, I clearly remember that on the morning of the final I thought that the group looked the freshest that I'd seen them over the course of the whole competition.

"There was the feeling that we had nothing to lose and everything to gain and that was so pleasing to see from everyone." 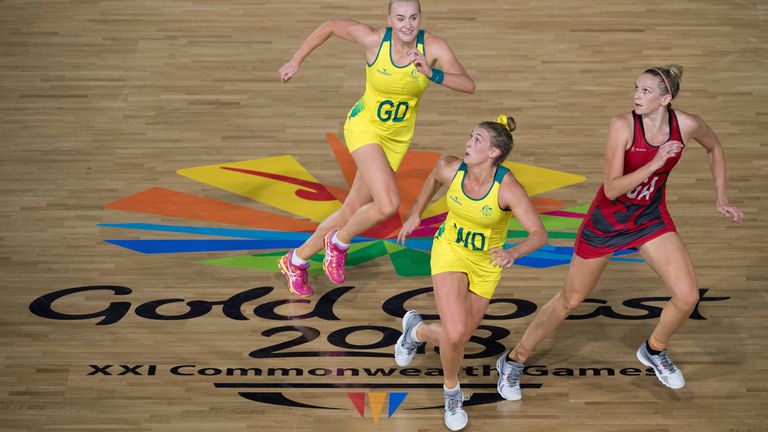 I think that because they had got into the final, which we hadn't done before, there was a different mentality. It felt like the whole world had been removed from their shoulders.

For Neville, the road to Commonwealth Games gold on the Gold Coast started when she was a little girl.

A love of the sport came from her early memories of her mum's local league team and she quickly turned that passion towards mastering the sport herself.

Once she had turned her mind to it, international recognition rapidly arrived. She made her debut for England in 1993 and went on to gain 81 caps for the Roses.

"When I started playing [for England] there were something along the lines of 50 goals between the likes of Australia and New Zealand and us.

Neville believes her time as a player did help when it came to taking on the role of head coach, it not only allowed her to feel every moment her players did, but it also provided a solid knowledge base to work from.

"I don't think that every athlete makes a great coach or makes a coach, but what I did have was the history of England Netball," she said.

"I was able to take the strengths forwards but also learn from some of the weaknesses that we had within our programme."

Throughout Neville's reign it was clear she was creating a powerful culture and a national side that had rock-solid foundations.

"One of the massive pillars [towards achieving success] was to give the Roses a programme that could make them the world's best," Neville said of her goals leading up to the Commonwealth Games and July's Netball World Cup.

"The second was the repeatability of the vision, reminding them what our vision was for the programme and getting buy-in from the athletes, players and staff. That was absolutely huge.

"Then, as a team what we did really well was to increase our winning mentality. We wanted to win every single day and one of our mottos was, 'If we're in it, we're in it to win it'.

"That in itself drove a lot of belief, a lot of togetherness and a lot of confidence in that we weren't scared of losing. I think that is hugely important."

Together England's Roses became an incredibly tight-knit group, on the court and off it too. They grew as a sporting unit and as a group of individuals and as friends too

The Roses faced the ups and the downs together and for Neville, the relationship that she had with her squad went much deeper than your standard coach-player dynamic.

A dream come true, my ♥️, my passion 🏴󠁧󠁢󠁥󠁮󠁧󠁿 my heart . Someone’s given me the 12 most beautiful red roses #webelieved 🥇

"Sometimes it was the team who made you wake up every day and get back on with it. They became your family, so you felt like you could achieve anything with that group of players."

The hardships and tough times took different forms for individuals and in September this year, Neville made public the heart-breaking news the day after England's gold in Australia she suffered a miscarriage.

"At the time, we didn't always know what was going on with people personally. They obviously didn't know what was happening in my personal life, but it felt like as a group, we just knew when to work with or around someone.

"They were contributing to me being able to recover or to get on with my life in the best possible way. That is absolutely huge, particularly after personal devastation."

After stepping down from the head coach role in June, Neville has shared the news she is expecting again and is preparing for her due date next year.

It is an exciting and understandably emotional time and, coupled with that, Neville is now looking in at the Roses from one-step removed, something that's a new experience.

"They always say that you never have to work if you wake up every day loving what you do. I think that's the hardest part now is that I don't have that anymore.

"But, I'm so happy to have a different goal for this year and to see where that leads me. We've waited a long time for this so it's very exciting for both myself and for my other half Michael."

Every member of the netball community in England, and others all over the world, are incredibly happy for Neville as she embarks on this new period of her life.

Those who are intricately linked with England Netball are also pleased to know that she has not fully closed the door on returning to the organisation in the future.

Of course, if she does then the group of players or even her role may be different to before. However, her ability to drive the sport and to create a supportive and successful culture will remain, and that is incredibly exciting prospect.