"I felt that pain and I turned around and expected one of the Scottish shooters to have kicked me, but when there was no one there I knew instantly"

Representing your country at a home World Cup is an experience of a lifetime, but what happens when injury takes that opportunity away from you? Layla Guscoth recalls the emotions of this summer's Netball World Cup in Liverpool and shares her progress since.

Guscoth is no stranger to hard work, she has blazed a trial for others to follow by combining a highly-successful netball career with qualifying and working as a doctor.

The 27-year-old missed out on the Vitality Roses' Commonwealth Games gold due to stepping away from the international stage in order to complete her qualifications.

Many would argue that had she been available, she would have been at the heart of the Roses' gold medal performance on the Gold Coast. So, when Tracey Neville announced her World Cup squad, Guscoth's presence was hailed.

On squad announcement day, Neville praised her agility, versatility and athleticism and made it clear that she would be "absolutely instrumental" in the Vitality Roses' quest for Netball World Cup gold.

Fast-forward 51 days after that announcement, and Guscoth's home tournament was over. With three minutes and 47 seconds left in the first half of England's group match against Scotland, the unthinkable happened and everything changed in a split-second.

"We read about Achilles ruptures in medical textbooks all of the time and you hear people say it's like a shotgun or it feels like someone has kicked you in the back of your leg," Guscoth said exclusively to Sky Sports.

"I felt that pain and I turned around and expected one of the Scottish shooters to have kicked me, but when there was no one there I knew instantly. It really is like you read in the books."

💔 We’re sad to announce that Layla Guscoth has ruptured her Achilles and will take no further part in the Vitality @NetballWorldCup. @traceynev: “Myself and all of the Vitality Roses are by her side supporting her through this time” 🌹

Looking back at replays of the match, you can see Guscoth calling time straight away. Her World Cup had just ended but her main concern was to do what was best for the team, and that was the only thing on her mind.

"All I could think about [when I'd done it] was that we'd had a briefing saying that if we thought that we had a serious injury, the team wanted to assess us off the court and away from the eyes of the crowd.

"I just knew that I needed to get out of the venue and get outside so that I could be assessed," she said.

"It was a very funny time. The first person that I called actually was Beth [Cobden], and we just sat there feeling really sad about it all."

Heartbroken. The most amazing person, athlete and friend. Everyone is with you @LaylaGuscoth ❤️ https://t.co/aZmo1j8yq7

While Guscoth's worst nightmare was confirmed by their team doctor, the Roses had to continue to do their job on court. They stayed focused to beat Scotland by 36 goals and once the formalities were over, it wasn't long before Guscoth was joined back at team's hotel.

"As soon as the game had finished and she'd de-briefed, I had a big knock on my door and a proper Tracey Neville hug," the defender recalls.

"In that moment she told me straight away that she was going to make sure that I was going to have everything that I needed medically. And, that she wanted me to still be there and that I was still a really important part of the team." At no stage did that feel like a strange thing to stay in camp, because everyone still kept me so involved and really wanted me to be a part of it all. It was really nice. I’ve been injured before and you can feel like a spare part and like you’re an inconvenience sometimes, it was amazing to still be able to share that experience with everybody.

"In that time at the World Cup, I actually didn't find it too difficult [emotionally]. The team were so supportive and the atmosphere was amazing.

"Even as a spectator, which I became, it was such a great thing to be a part of and I had pride at the way that Liverpool ran a Netball World Cup.

Quite moving watching Layla Guscoth sing the anthem in a moon boot with her World Cup over. @NetballWorldCup @SkyNetball o pic.twitter.com/T8Qc8cmGPr

Injuries, both minor and major, are par for the course when it comes to being an athlete however knowing that doesn't always make them easier to handle in the long-run.

Guscoth is a bright and positive person but even she experienced difficulties once the dust had settled.

"I think that challenge was the bit after, when you come home, and you don't have all of your team-mates around you and you don't really have anything to focus on. 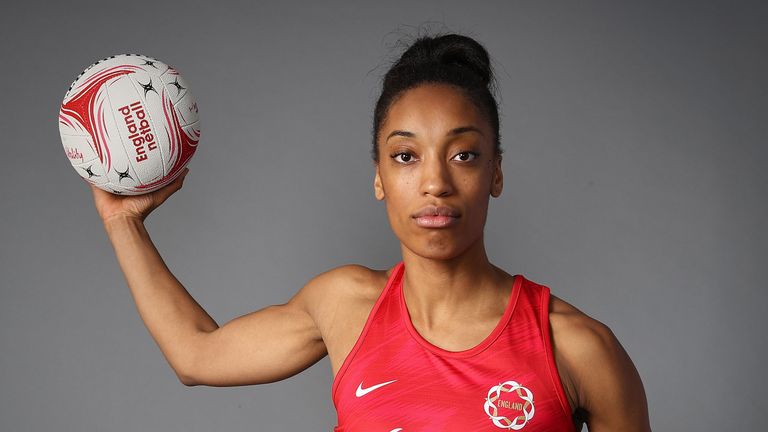 I'm someone that's really used to being quite busy and I definitely had periods where I struggled with having too much time. I know that time is something that you often beg for, but when its enforced upon you it gives you a chance to think, to reflect, contemplate and feel frustrated.

"My toughest part was around the 11/12 week mark. For so long I'd wanted to come out of the boot and I'd set that as a bit of a goal, then I got to it and really struggled transitioning out of the boot.

"It was at that time when I just felt like why? Why have I been through all of this for this to be the end product?"

End face says it all Walking is not as easy as it looks! Who knew it felt so nice to wear a shoe again #11weeksanddefinitelycounting

For the 27-year-old, the support of other players who have also been through such a horrible injury, has been invaluable. From the person that she first called - Beth Cobden - to others all over the world, their experiences have inspired her and have shown her the path forward.

"The day after I had my operation, I did something with Tamsin and Pam on Sky and I'd forgotten that Pam had done hers just before the Commonwealth Games four of five years ago.

"She just gave me a hug and some reassurance that it will be fine and that I will get back. So seeing people like her, Sasha (Corbin), Jodie (Gibson) and people from other sporting teams too, like some of the players at the Rugby World Cup, provides so much inspiration.

"It helps because although it does seem like a long journey, it shows that you can get back to where you want to be."

💔 with this news. A special lady & baller who has come so far these past few seasons after her international break. Will be sorely missed by her team mates & us spectators. Layla, know you are in great hands. Believe there will be light at the end of this tunnel 🌹 https://t.co/PehQVIJk0m

Where Guscoth wants to be is back at the top of her game, she's not naive to the fact that the road back there will take time, neither does she think that she will breeze back into the national squad. However, her focus is set on doing absolutely everything possible to return to the world stage.

Guscoth's rehab has been here in England, she has been a part of the Roses' camps and will look to start running in the next few weeks. Alongside this, she has completed the research role that she was undertaking and is now back working on the wards.

What a week! 10 days, 8 matches, 1 operation, 1 bronze medal 🥉🥉🥉 @netballworldcup Liverpool you have truly been amazing. So proud of this group and what we have achieved. To all the supporters, you made this experience unforgettable and I am so happy we got to showcase how great our sport is! To our boss @traceynev. Thanks for being a formidable leader. You will be greatly missed x

When a player has their dream taken away from them, it would be very easy to crumble and to spend a long time battling negative thoughts, thinking and dwelling upon the 'what ifs'.

Speaking to Guscoth it's very clear that with the support of those around her, she has decided to tackle this set-back another way. Her resilience and attitude is what makes her. It not only makes her a formidable netballer, but an exceptional person and doctor too.

"You can't take anything for granted in sport, but I would love to do it all again," she concluded.

"I would love to be there in 2023 in Cape Town and get to finish a tournament... that would be good!"