It's the hardest Vitality Nations Cup to call, the four teams all match-up in key areas

With the Vitality Nations Cup starting on Sunday, Tamsin Greenway looks at each nation's key focus areas and shares her excitement about the unpredictability of the competition.

I think this is going to be the hardest Nations Cup to call, but I do always think that's the case when it comes to the first year of a new international cycle.

You never really know what the coaches want to get out of the competition, and how they are going to play it. Obviously, they all want to win but with the squads that they have picked, they have to try out new players, combinations and styles.

Looking across the board, I hope it will be a really close competition because the four teams match up and cancel each other out in certain key areas.

For example, without Maria Folau we will see a new shooting partnership in the Kiwi circle, that gives the likes of Jamaica with one of the best GKs in the world - Shamera Sterling - a chance to get stuck in defensively.

We are going to witness these match-ups and new battles across the board, which is likely going to produce some incredible games.

With the potential for goal-for-goal matches, it means coaches will be tested. Do they make combination changes mid-match, do they trust their new talent, and do they know enough about their squads to come away with a victory?

I don't think any of the coaches will come out and honestly tell us what they're trying to achieve either and I think they will play down the games and the results (however they go) but it makes for great spectator viewing.

Every nation and squad in this competition, has key areas they need to address in order to be as successful as possible not only across the four match-days, but moving into the next cycle.

For New Zealand, it's looking at the position of centre and whether they stick with someone like Shannon Saunders in the middle or give Kimiora Poi more time there?

Personally, I really rate Poi. She reminds me of Temepara Bailey (née George) in terms of her athleticism and how fiery she is.

I think that they have got to give her a real shot in the middle. She's powerful, creative and quick, I'm going to enjoy seeing how she develops.

I remember when Kim Ravaillion arrived on the scene for Australia, Natalie von Bertouch got injured and Ravaillion was dropped in at the deep end and played-out Tests at Centre for the Diamonds.

She had to learn quickly and although it was not perfect that was the making of her. I wonder if Poi is given time here, will her Test career sky-rocket?

Also, the Silver Ferns will also have to focus on their shooting end. Where are they going to play Ameliaranne Ekenasio? Is she going to be out at GA or in a shooter and in both cases, who is going to partner her?

I would like to see more of Maia Wilson because I think that we have already seen the best of Bailey Mes and Te Paea Selby-Ricket.

The Ferns have relied heavily on Maria Folau in the last few seasons, so it's surely time to give Wilson a shot and opportunity to grow on the international stage alongside Ekenasio.

"I feel like maybe my work is just beginning..."

Hear from Dame Noeline Taurua on being awarded her Damehood in the New Year’s Honours 👏 pic.twitter.com/AGzEboM7Ul

Moving on and looking at England, their key areas - as I've mentioned before - are the positions of centre and GK.

I believe that we will see Stacey Francis running out again at GK, but I would love for Razia Quashie to gain more court time. I think that looking towards a long-term plan in that position is vital and because of that I would like to see much more of Quashie.

That said, of course it's difficult for Jess Thirlby as she's on home soil and she will want to get victories too. Plus, this is a perfect opportunity for England to win without the challenge of Australia.

England Roses 'thrive off being at home'

Jess Thirlby reflects on the Vitality Roses' journey to date and looks towards their toughest tests yet in the Vitality Nations Cup.

When it comes to the Roses' and the centre position, Amy Carter has been named in the squad.

In my view, if she's there I would use her because you need to see what she can produce. It would be a real shame if she wasn't used fully and we did not get to find out if Carter can really add to England's mid-court.

Amy offers both the WD and C position and is a very understated player. She goes about her work very well and is a real athlete with great natural physical abilities. For me, she’s been one of the standout young performers in our Superleague competition over the last couple of years alongside the likes of Sophie Drakeford-Lewis and Imogen Allison.

Looking at South Africa, firstly I'm going to be seeing what they do at GA.

During their last series against England, I loved Lefébre Rademan and what she brought to the court. She had a major impact in the first Test, and was found out in certain areas in the second, but that's totally understandable for a new GA coming into the picture.

I do not want them to give up on her and I think her partnership with Lenize Potgieter was strong. Rademan was fearless and I think her shot will become more solid the more time she gets.

For young shooters it's a confidence game, make them feel special and let them perfom. Hopefully she will be given lots of time in this Nations Cup in order to establish more in their attack end and to see what she does against teams with different styles.

Karla Pretorius being back for South Africa and partnering with Phumza Maweni is huge for them and provides opportunity to sort their mid-court and in particular their centre.

The beauty of this competition is the teams can all risk putting in new centres, because they are all in the same boat there. Carter, Poi, Dixon and for the SPAR Proteas, Romé Dreyer impressed me last time out.

It's clear they are using Bongi Msomi as more of an impact player so, this gives Dreyer the experience she needs against different styles like a Kiwi zone or the Sunshine Girls' physicality. It gives her time to shine.

Vitality Nations Cup: All you need to know

Get the lowdown on all four of the nations playing in the 2020 Vitality Nations Cup from January 19-26, live on Sky Sports.

When it comes to Jamaica, first and foremost, thank goodness they have brought a good, talented squad.

They are always going to score goals with Jhaniele Fowler in their circle but there are two vital areas they must sort out - GD and WA.

Sterling needs a partner in that defensive circle, she needs someone who can perform out the front. I have raved about Jodi-Ann Ward for a long time, I do not think she got enough time at the World Cup and I do not think they trusted her enough.

I would like to see her given a shot because I think that she sets up so much for Sterling. She's not the tallest but her elevation is incredible and she shone in last year's Vitality Netball Superleague at GD

Jamaica's biggest issue though, is the WA position which was highlighted in Liverpool at the World Cup. They have such a target in the circle with Fowler, but they need to sort their structure in the whole attack-end. 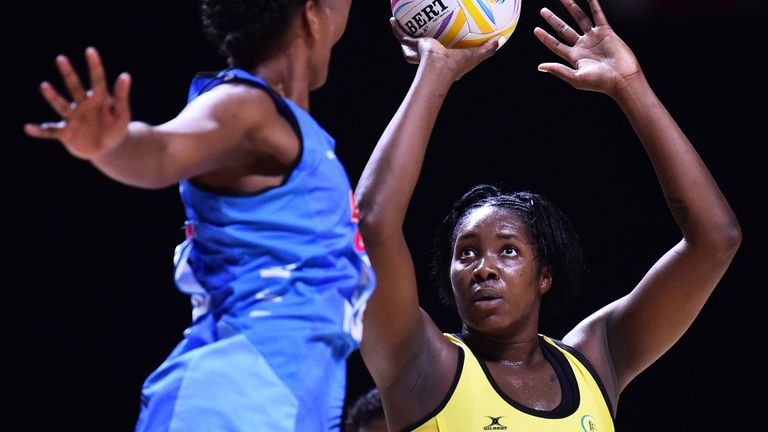 It's not good enough to just have a target now, Jamaica need to choose a leader in that position [WA] and if they fix that area, they will be lethal.

Overall, because of the dynamics of this Nations Cup when it comes to coaches' approaches and every team having key areas of the court to focus on, for the first time ever I'm going to sit back and not predict how it's going to finish.

I truly do not think you can call what the coaches are going to do and that's what makes it exciting.

However, I do believe we are going to get some goal-for-goal games and this is an amazing opportunity for us to see the emerging international talent coming through from these nations. I just cannot wait.