Watch the match back on the Sky Sports YouTube channel; England face Jamaica on Saturday 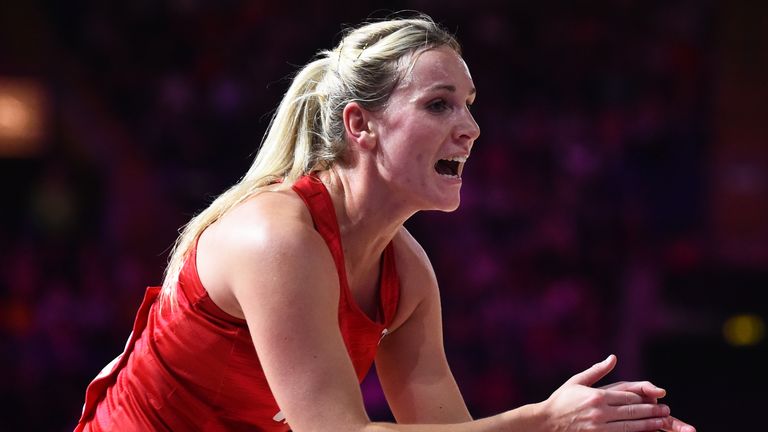 England's Vitality Roses problem-solved throughout to beat South Africa 58-54 and gain their first win of the Vitality Nations Cup.

The Roses' victory completed the second matchday of the competition at Arena Birmingham and followed New Zealand's dominant performance against Jamaica.

The four-nation competition now moves to London for the final weekend at the Copper Box Arena. All of the teams have one more round-robin match before a final day of play-offs on Sunday.

Take a look back at the match in full via the stream on the Sky Sports YouTube channel.

Head coach Thirlby went into this Test off the back of a 64-48 loss to New Zealand and decided to tweak her starting seven for this second match.

She handed a start to George Fisher at GS, moved Eleanor Cardwell out to GA and selected Fran Williams in the defensive end with Stacey Francis.

South Africa's key change was to introduce someone who made waves when the two sides met last year, Lefebre Rademan, in at GA.

A goal-for-goal first quarter played out, with both teams keeping their composure before the SPAR Proteas finished strongly and created their 16-13 lead in the final moments.

At the first opportunity, Thirlby decided to make changes. She introduced Kate Shimmin at GD in order to contest with Rademan and also amended her mid-court.

Amy Carter, who had an impressive five-minute debut against New Zealand, arrived at Centre with Jade Clarke shifting back to WD.

England's ensuing quarter was an undulating one as combinations took a little time to settle and South Africa's world-leading defender, Karla Pretorius, showed her class.

Pretorius had a quiet first match against Jamaica and clearly was eager to make up for that. She disrupted the Roses' attack-end at every opportunity and got the better of Cardwell against her at GA.

The home side went into half-time 26-25 down and Thirlby decided to make further line-up amendments for the second half.

Captain Haythornthwaite moved back to GA, Cardwell dropped into GS and Chelsea Pitman arrived at WA - the changes would prove to be inspired ones.

The shifts in personnel instantly paid dividends. Haythornthwaite's speed provided the dynamic that the Roses needed in attack and the new picture cut through South Africa's resistance.

With Shimmin and Francis working tirelessly in defence, their turnover ball was now rewarded and England created a 42-37 cushion at three-quarter time.

With the crowd roaring them on in the fourth quarter, Thirlby's side weathered a final storm and lead by Haythornthwaite and Francis in particular, found the gears required to secure their much-needed victory. 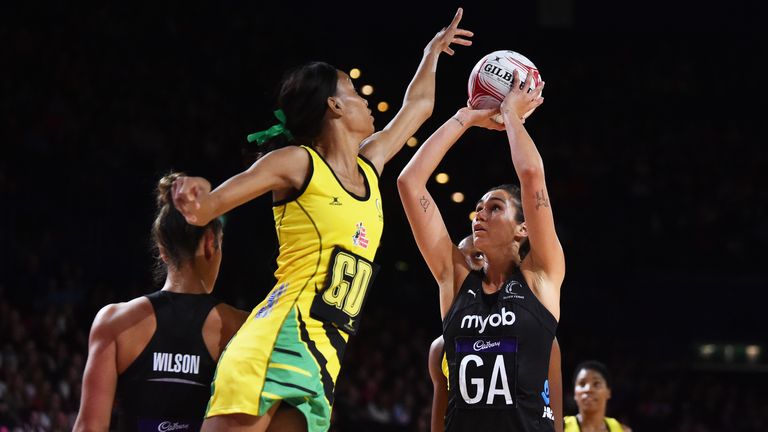 In the first match of the day, the Silver Ferns added a second victory to their tally as they dominated in every facet and prevailed 71-45 over Jamaica.

Noeline Taurua continued to showcase the strength of her squad as she again rotated her shooters and gave valuable court-time to all players in her touring squad.

Take a look back at the match in full via the stream on the Sky Sports YouTube channel.

Shooter Maia Wilson excelled and was deservedly named the player of the match. She shot at 93 per cent, putting up 42 of her 45 attempts, and showed her strengths as both a focal point in the 'D' and a moving option.

For the Sunshine Girls, their own mistakes plagued their work and they were not able to replicate the same levels of discipline and clarity they found against South Africa on Sunday.

Connie Francis' side must now regroup before facing England on Saturday afternoon in London while the Silver Ferns will prepare themselves for a meeting with South Africa.

Sky Sports is your home of netball - every moment of the Vitality Nations Cup is being shown on air and streamed on YouTube. The third match-day is on January 25, with New Zealand versus South Africa and England against Jamaica.