"Everyone says it’s like a dream come true, but I think for us it felt like a part of history"

On April 15, 2018, England's Vitality Roses shook up the world order and won gold at the Commonwealth Games on the Gold Coast, beating hosts Australia in the most dramatic of fashion.

In the two years since that golden day in Australia, Neville continued in the role and led England to bronze at a home Netball World Cup before leaving to focus on her family life.

The former international stepping aside marks a break from a long-standing active relationship with the national side. She made her own debut for England in 1993 and achieved 81 international caps before moving into coaching.

"I'll never say it's going to be my last game. It's my last one for the moment," she said to England Netball after their final match in Liverpool last year.

"I do need to take a career break because I've got some personal things I want to achieve and while I'm in this role, I'm not able to achieve that. However, I have been part of this system for 20 years and I want to be part of it again."

Since putting down her coaching notebook, Neville has remained a part of the netball world while also focusing on her family life. Together, she and her partner Michael welcomed baby Nev into the world in early March.

"It is strange now. I realised that once I've had Nev, netball is something that I'm really missing from my life and I can't wait to get back involved again," she said to Sky Sports on Off The Court.

Prior to the Netball World Cup in Liverpool, the team's major goal was achieving success at the Commonwealth Games on the Gold Coast in 2018.

Since netball became part of the games, the Roses had never made it to the final.

Ahead of the 2018 games, with Neville leading such an ambitious, driven and experienced side, she had visualised what it might be like to achieve gold - and what the aftermath might look like too. When it came to it, the reality was a little different!

"At the Commonwealth Games, I'd had an image for 20 years as to how I would celebrate a gold medal," the former England head coach said.

"If I looked at how I actually celebrated that gold medal, I think that it was with a cup of tea and bed. I was absolutely exhausted by that [point]."

Tracey Neville about the gold medal celebrations in Australia

I remember going out with the players that evening. You think that you're going to have the wildest night of your life, I thought I was pregnant at the time so I couldn't, but I remember looking around at them and they were absolutely knackered.

The Roses' route to gold saw them play seven matches in ten days, and they saved the ultimate duel for last - a meeting with the hosts and world leaders Australia, on April 15.

Prior to the final, a heart-stopping 56-55 victory over Jamaica set the tone, and on that occasion, the unflappable Jo Harten put the deciding shot up in the final seconds. When it came to the final against Australia, the intensity lifted further.

After both teams scored 25 goals apiece in the first half, Neville's side found themselves 38-36 down with 15 minutes to play. They then fell further behind in the last, by 40-36, before mounting an inspired comeback to lock the match at 51-51.

Then came 'that' finish for England - the finish that netball fans will have watched thousands of times since and the finish that shook the foundations of world netball. 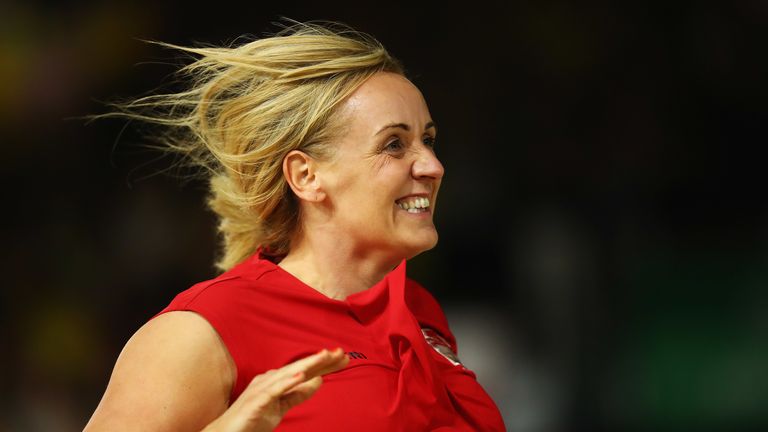 Everyone says it’s like a dream come true, but I think for us it felt like a part of history.

For Neville, it wasn't the first time that she'd seen Helen Housby nail a last-second goal in a final.

The shooter had done it as part of her Manchester Thunder side four years prior in order to win a Netball Superleague title. Needless to say, she has joked with Housby since that perhaps they could 'win it a bit earlier' in future!

As Housby's match-winning penalty pass or shot swished through the net, there was a state of euphoria on court and that was matched by fans 10,000 miles away.

Across the country in England, thousands of people forgot about the fact it was the early hours of the morning and roared at the tops of their voices to hail a first netball gold.

Back courtside on the Gold Coast, Neville took it all in from the bench and shared the feeling so many athletes and coaches experience after achieving substantial success.

"When it went in, there was a huge wave of emotion and relief," Neville reflected. "As soon as Helen had the ball in her hands, I knew that she wouldn't miss."

At this point, Neville wasn't only shouldering the emotion of the final but of the competition as a whole - in particular the final couple of days which contained back-to-back winner-takes-all matches.

"I actually thought that we looked more tired before the semi-final," she said.

"The night after that one-goal win over the Sunshine Girls [Jamaica] none of us had much sleep. The players had been recovering and all of us had struggled, even though we knew that the final was the day after.

"Despite that, I clearly remember that on the morning of the final I thought that the group looked the freshest that I'd seen them over the course of the whole competition.

"There was the feeling that we had nothing to lose and everything to gain and that was so pleasing to see from everyone."

A lifetime ambition realised, after years of hard work, self doubt, wishing, training, trying. It's the experiences along the journey and the people that make this moment so so special. Comm Games FINAL, we've finally broken the deadlock. Nothing but love. Thanks for the support ❤️🌹❤️ #teamengland #englandnetball #roses #cwg2018

England's road to scaling the previously unconquerable Commonwealth Games mountain had its twists and turns. However, from the start the players were all clear about what they wanted to achieve and in Neville's case, she was clear about what was required to do that.

"As a team what we did really well was to increase our winning mentality," she said about their development. "We wanted to win every single day and one of our mottos was, 'If we're in it, we're in it to win it'.

"That in itself drove a lot of belief, a lot of togetherness and a lot of confidence in that we weren't scared of losing. I think that is hugely important."

A dream come true, my ♥️, my passion 🏴󠁧󠁢󠁥󠁮󠁧󠁿 my heart . Someone’s given me the 12 most beautiful red roses #webelieved 🥇 pic.twitter.com/LnsYpMnuHa

Together the Roses became an incredibly tight-knit group. They grew as a sporting unit and as a group of individuals and as friends too.

The Roses faced the ups and the downs together and for Neville, the relationship that she had with her squad went much deeper than your standard coach-player dynamic.

"Sometimes it was the team who made you wake up every day and get back on with it. They became your family, so you felt like you could achieve anything with that group of players."

For now, this family - the one that set a new bar for English netball - are not together in person. Instead, they're in all different parts of the world, at different stages of their careers and are living with this 'new normal'.

Despite the distance between them, and the uncertainty across the world, every member of that gold medal winning team, from management to the players, will pause and smile thinking about April 15, 2018 today.

Video calls, text messages and phone calls will be shared, as will posts on social media, and all will take them back to a momentous day on the Gold Coast - a day in which they created history and took the sport that they love to new heights.